my son the maid

Max Davidson was an early popular silent film comedian who gained fame for playing a Jewish businessman, using many of the stock and stereotypical mannerisms that had long become famous in theater, but adding new depth to his depictions a man seeking a new life but straddled and sometimes prevented in his search by his troublesome sons (often played by Spec O’Donnell or Jesse De Vorsky) and his beloved various daughters. Louis B. Meyer did not like his characterizations and allegedly put an end to Davidson’s early popularity.

Yet in the early days Davidson’s work, particularly as produced by Hal Roach, was highly regarded. One of the best of his short comedies, Don’t Tell Everything (1927), was directed by Leo McCarey who later became the director of numerous acclaimed films including Duck Soup, Ruggles of Red Gap, The Awful Truth, My Favorite Wife, Going My Way, The Bells of St. Mary, and  An Affair to Remember.

His 1927 22-minute work might be said to be divided into two parts, almost defined by its two reels. In the first Papa Ginsberg (Davidson) is on his way to a party at the Doodlebaums with his bratty son Asher (Spec O’Donnell) when he begins to have car problems. Stopping by an auto repair shop, he encounters the incompetent mechanic Finkelheimer (Jesse De Vorska) who slinks up the car to fix what Ginsberg claims is  “some little inexpensive thing,” and begins by taking it completely apart.

Rather inexplicably Ginsberg has found a way to the party which up to this time has featured a comedic dance between a young boy and his overweight girlfriend and the corny magic tricks of Lawyer Goldblum (James Finlayson) which Asher keeps foiling by breaking the liquor glasses and balloons his magic trick requires with a sling-shot.

His father, meanwhile, is attempting to woo the wealthy widow Finkelheimer (Lillian Elliott), which appears to be going nicely except for the interventions of Asher, a boy who the widow finds detestable, demanding to know from her would-be lover, who he is. Ginsberg insists “In all my life I never saw him before.”

To escape Asher’s attempt to thwart his romancing, he suggests that the widow and he take a little automotive trip. In front of the Doodlebaum house the car sits, looking quite spiffy despite the fact that we have observed the incompetent mechanic toss away dozens of parts for which he could find no place when piecing the machine back to together again.

As Ginsberg begins to wind up the starter, the car gradually falls apart beginning with headlights, and ending with every single piece of the machine collapsing upon the concrete. When a street cleaner comes back, the car pieces are suddenly swept away in flood of water that send the car parts into the sewer, Ginsberg managing to save only the license plate.

As if to compound incompetence with theft, the mechanic visits Ginsberg’s clothing shop a few days later to select a new suit. He picks one out, hinting that his purchase will now square all his debts for the destruction of Ginsberg’s car, to which the shop owner reacts in such an outrage that the mechanic rushes from the store without paying almost being hit by a passing car. Now, suggests Ginsberg, things are “squared.”

If the first reel wasn’t all that funny, the second is better if not brilliant, and is why the piece appears in this volume.

Somehow, despite Asher’s attempts to thwart his father’s relationship with widow Finkelheimer, the two have hit it off and are now married, Ginsberg having tossed his teenage son out of the house to protect his relationship. In order to return home, as Asher writes his father, he intends to return home dressed as a woman who intends to become the family maid. 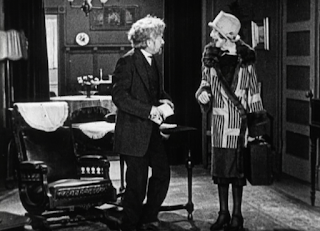 Dressed up in drag, the awkward freckle-faced kid actually looks quite convincing. With his peroxide blonde wig and a rather stylish coat the new girl in town even catches the eye of the widow on a shopping trip, who seems a bit scandalized by the arrival in their neighborhood of such an obvious hussy and follows her into her own home where, listening through the partially open door she hears Asher telling his father “Your wife won’t get wise to us—she’s too dumb.” Finally breaking in on their seeming romantic tête-à-tête, she demands to know what’s going on, while he convinces her he was just meeting with the new maid he has hired to help save his “Mama” from hard work.

She pretends to be convinced and exits again to finish her shopping, but actually sneaks back in, finding that her husband and the maid have now retired to the bedroom, where, as she sneaks a peek over the transom, she observes Ginsberg, who has angrily begun to try to remove his son’s  costume, is observing how smoothly his son has shaved his legs. Storming out, Finkelheimer is on her way this time to the lawyer. 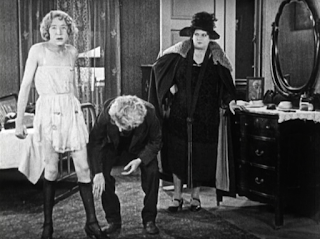 Finally feeling guilt for having ruined his father’s relationship, Asher attempts to chase after her to explain the situation, forgetting however, that he is now dressed only in his feminine underclothing. A stunned crowd of gawkers quickly gathers, and a cop (Budd Fine) appears out of nowhere, with Asher suddenly declaring to the policeman “Honest, Mister, I’m not a girl—I’m a boy!” as if that might better his absurd situation. But there is something truly close to camp in his statement, and for me it stands out as one of the better crossing-dressing scenes of silent filmmaking.

The girl/boy runs off, jumping into a barrel of black paint to escape the pursing cop. Rising from the barrel soon after, the film seems for a moment to be toying with racist humor, but quickly gets back on track as the now black Asher rushes back into the Ginsberg apartment when he observes his step-mother heading home this time in the company of her lawyer (Finlayson).

Goldblum (the one of magic tricks from the first reel) tries to reassure her that Ginsberg could not be guilty of such behavior, that it all must be a misunderstanding. But when upon entering the bathroom he discovers Ginsberg giving a bubble bath to the maid, with his friend’s lame excuse “the maid needed a bath—awful,” things appear to be over for Ginsberg’s marriage.

Finally confessing the truth to Finkelheimer, and providing the evidence of his half-naked scrawny son, all is reconciled. A knock at the door, however, interrupts their reunion. Sneaking a peak at who’s behind the door, the former widow sheepishly turns back to Ginsberg to admit that she too has not told her new husband “everything,” that “I also got a son.” The door opens to reveal the incompetent mechanic who destroyed Ginsberg’s auto. 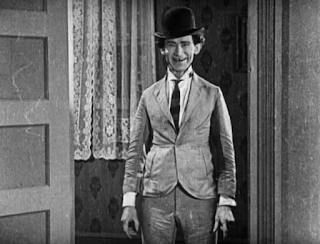 Today, with their new “blended” family, this work would probably be made into a successful television series; what if Asher rather enjoyed his role as the pretty maid and the mechanic Finkelheimer took a liking to “her?” It might almost be an early Schitt’s Creek.

Posted by greenintegerblog at 6:28 AM