Although it still appears on some lists of productions as an extant film, the German cinematic version of Oscar Wilde’s The Picture of Dorian Gray, Das Bildnis des Dorian Gray, directed by Richard Oswald and released in July 1917 has for long been considered a lost film.

This version, unlike most of the previous adaptions, was a full five-act, 80 minute feature starring the German matinee idol, Bernd Aldor, this the first of some 20 film roles in which he starred between 1917-1931. 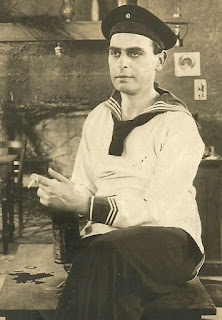 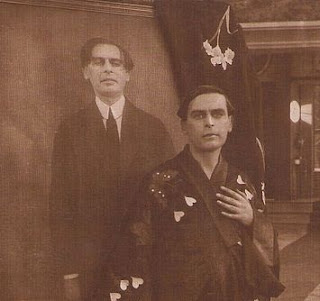 From the pictures we have of this production, Aldor evidently played Dorian Gray as a sailor, although another shot of him before the portrait represents him as wearing a Japanese-like robe. Ernst Pittschau appeared as Sir Henry Wotton, Ernst Ludwig as Basil Hallward, Lea Lara as Sibyl Vane, and Andreas Van Horn as Dorian’s ex-college chum Alan Campbell.

The cinematographer was Max Fassbender and the sets were designed by Manfred Noa.

Reviewers of the day praised its relative faithfulness to the original text, and for the empathy the director created for the lead figure Aldor. 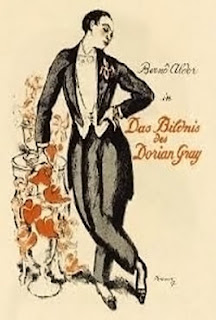 The poster for the film quite nicely catches the fin de siècle spirit of the original.