Anyone who has read these pages would perceive that I am interested in genre, and fascinated by its various manifestations and transformations. Yet I would never argue it necessary for any film to fit or be delimited by genre, and I might even claim that some of the greatest cinematic works defy generic definitions, blending genres or ignoring them altogether. It is often when directors and their cinematographers break with generic conventions that new forms and more vital methods of expression arise.

There are some films, however, that use generic conventions to their advantage and others that introduce several genre issues which create a sense of confusion and lack of focus rather than blending or transforming them. British filmmaker Terence Young’s 1959 movie Serious Charge is just such a case in point.

On one hand this might be defined as a film about a forging of a relationship between church and youth in the manner of the several Spencer Tracer and Bing Crosby priest and boy series of works such as Norman Taurog’s 1938 film Boys Town and Leo McCarey’s 1946 movie The Bells of St. Mary’s. In this work the new local vicar, Reverend Howard Phillips (Anthony Quayle) is determined from the beginning to help the young teens of his village to escape the nearby coffee house, their rock-and-roll dance marathons, and their gang affiliations in one fell swoop by starting up a church supported center where young men can dance, learn how to box, and do any number of manly activities under his supervision. Like the well-intentioned but definitely “squaresville” figures of the community center in West Side Story (1958) he genuinely believes that he can get any warring gangs together and work out their differences. 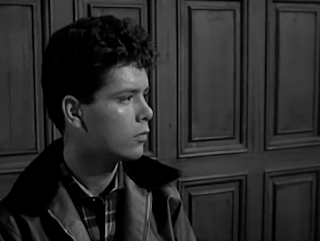 Only in this small town there is only one “gang,” headed by 19-year-old thug, petty criminal, and local heart-throb Larry Thompson (Andrew Ray) who has already gotten one young innocent girl, Mary Williams (Leigh Madison) pregnant  and led his innocent rock-singing brother, Curley (soon-to-be British rock-phenomenon Cliff Richard singing one of his hits in this movie, “Living Doll”) into trouble. The vicar explicably takes a special interest in the cute boy Curley, attending court to speak out for him and take responsibility for his reformation. Richard even gets the opportunity to belt out three songs in this film, despite that fact that he hardly gets a line of dialogue and seems almost to be forgotten until the end of the story.

Featuring a man who tries to understand the new rock-and-roll, gum-chewing, leather-jacketed generation of the 1950s, Young’s film also calls up the numerous teen angst films of the 1950s from Luis Buñuel’s Los olvidados (1950), Laslo Benedek’s The Wild One (1953), Nicholas Ray’s Rebel without a Cause (1955), and Richard Brooks’ Blackboard Jungle (1955), to Thomas Carr’s Dino (1957), Robert Altman’s The Delinquents (1957), and John Frankenheimer’s The Young Savages (1961). 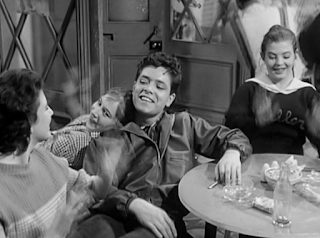 For a moment, given the Vicar’s wartime experience as a paratrooper, his boxing abilities—he is able to defuse a gang situation by putting a headlock on one of their members and downing another, and later he knocks out the Thompson boys’ violent bully of a father (Percy Herbert) when he attacks him—and the fact that inexplicably this young vicar is also a champion soccer player you might almost think this film is going the direction of a movie about a grand athlete in ecclesiastical drag.

Since the ex-vicar’s spinster daughter Hester Peters (Sarah Churchill) has the hots for the new vicar (as well as his young French maid Michelle [Liliane Brousse] and several gang girls) and his slightly dotty mother (Irene Browne) wants to get him married there are also moments when this man’s man might get caught up in the kind of slander that Walter Pidgeon suffered in John Ford’s How Green Was My Valley (1941) or Montgomery Clift in Alfred Hitchcock’s I Confess! (1953).

With so many possible genres vying for the directorial direction, and with one truly rotten apple in the barrel to rub the entire story into action, something has to give, and in this case it’s the poor small town athletic-driven, reform minded, boy loving, woman-fearing, well-intentioned vicar’s sexuality.

When Mary, meeting with the vicar in private, reveals that she is pregnant with Larry Thompson’s child and, upon seeing him on the street making out with Michelle, walks distractedly into her death by crossing the path of a car, all hell breaks loose (hence the film’s alternative title A Touch of Hell) as the vicar pulls aside Thompson to accuse him of being an accessory to Mary’s death at the very same moment that the busybody Hester stops by to observe a woman leaving from the back entrance of the house and a boy running from the front door, his shirt half torn, declaring that the vicar has “tried to interfere” with him. 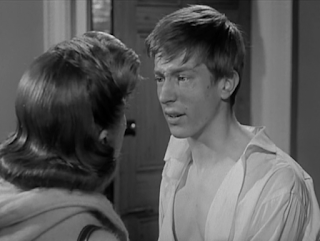 A bit like the forever gossiping community of Wyler’s The Children’s Hour this British town suddenly makes judgment without even the intention of a fair hearing.

Indeed, the movie goes out of its way for the rest of its narrative to prove to us what we already know, that the vicar is totally innocent. But in its endless pleading of vicar Phillips’ case, the vicar’s refusal to fully defend himself further, and the fact that we know that Hester, despite her total misperception of the facts, is indeed speaking the truth in testifying to the boy’s lies, we too have to begin to look of the reality laid out before us with some suspicion. Much like Basil Dearden’s 1961 film Victim—the film with which Serious Charge has the closest kinship—once the charge has been made, the vicar has already become something else than a human being seeking out the truth, but has become a “victim” which no matter how much is later revealed—and in this case, through Hester’s efforts Phillips is eventually completely exonerated—will never not also be perceived as a possible child molester. If nothing else, we certainly must suspect that— despite the fact that Young’s movie attempts to provide us with a “happy” ending, three women coming together to outwit the innocent male with the intention of eventually marrying him off to Hester—Phillips is a gay man.

As a British Film Institute site on unknown British gay films suggests, it is fascinating after seeing this film to look for the various clues to the vicar’s homosexuality—without even hinting what those clues might be.

Certainly, we might begin in such a search by looking at the scene in which the frustrated Hester, desperate to gain the vicar’s sexual attention, impulsively—probably the first such act in her entire life—to kiss him. Normally, a man disinterested in this spinster’s sexual attentions, might simply pull away and suggest that her attentions are inappropriate or that he is simply disinterested in a sexual relationship with a church worker associate. But our young man, quickly pulls back as if for the first time ever he witnesses a woman having been attracted to him (and this despite the fact that his mother has already forewarned him of the girl’s intentions) and in some shock declares “Oh my dear girl. I’m so sorry. I think you better go.” 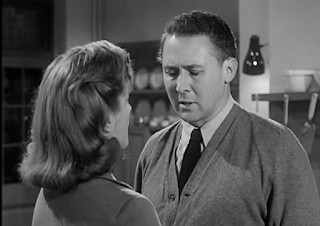 In his statement of being “sorry,” it is hard to believe that he is expressing simply empathy for her having mistaken his sexual interest in him. The sorrow here seems more to be a confession, a sorrow for his own lack of desires, a realization that she has deemed him to be “fair territory” when in fact, so to speak, he plays for another team. After all, he has even been quite oblivious to the allure of his sexy servant Michelle.

And speaking of sports metaphors, why does the narrative continue to repeat the fact that during the televised soccer event he kicked in an important score when, even he admits, he was “out of bounds” or “offside.” I’ve seldom heard a scoring sportsman, who the referees have not called out, declare he won illegally. That’s not even good teams-manship.

Why, moreover, even after Hester has even risked rape by Larry Thompson in order to find out the truth of the boy’s charge of having been assaulted by Phillips, does the vicar still remain determined at film’s end to move away from this “Peyton Place”—even after nearly everyone has trotted through his door to plead with him to stay on?

And what is it about the cuter of the Thompson boys, Richard’s character, that so engages him that he is willing to appear in court again and again to stand up for and serve as the boy’s sponsor, while falsely accusing the far blander looking Larry of having “killed” his ex-girlfriend and being of her murder. Larry might be seen as unfeeling and uncaring being who was largely responsible for the girl’s mental condition which caused her death, but he is not a true murderer? 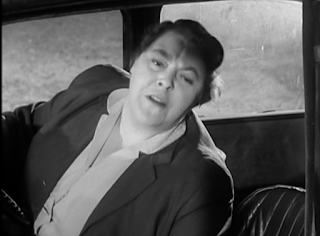 Finally, it is not Hester and Mrs. Phillips who momentarily divert his attention from continuing to pack up and leave the place, but the arrival of the dykish probation officer (Judith Furse, who often performed such roles) to demand he appear in court on “unfinished business” to save Curley Thompson from prosecution, that, at least momentarily, stops him in his tracks. Let’s face it, the noted rocker Cliff Richard was a looker who spent years of his career adamantly denying that, despite the fact that he never married, he was not gay. It’s more than a little ironic that in in his 2001 autobiography that he admitted that his partner for the past seven years had been John McElynn, a former Catholic priest. You can’t make these things up!