the crime of loving

Unfortunately, the major cinematic representation of lesbianism of my parent’s and my own generation is likely to have been William Wyler’s 1961 film version of Lillian Hellman’s 1934 stage play, The Children’s Hour—a rather odd phenomenon since the central characters of that work, Karen Wright (Audrey Hepburn) and Martha Dobie (Shirley MacLaine) not only claim not to be lesbians but have been accused of being lovers by children who have utterly no comprehension of what that might entail.

If originally Hellman might be perceived as having been sympathetic to lesbians, it appears when one looks closer at this film that she is far more interested in women who have suffered false accusations by a society that readily buys into lies and fabricated realities than in female individuals who truly love one another. And indeed, in Hellman’s outdated vision of homosexuality, it is to be expected that once labeled a member of the LGBTQ community they should be prepared to be stared at as if they were freaks, mocked, and ostracized by the community, ultimately shamed into committing suicide.

These women and the man one of them was to have married, Dr. Joseph "Joe" Cardin (James Garner), are of interest to the playwright and the screenwriter John Michael Hayes primarily because they were wrongly accused, not because they might actually be homosexuals. One has the feeling that if they had actually been lovers, the stories told by their students—the Bad Seed-like monstrous Mary Tilford (Karen Balkin) and the schoolmate she holds under her control, Rosalie Wells (Veronica Cartwright)—Hellman might have cared less about their lives and perhaps even  celebrated or at least tolerated their treatment by the community at large. I can easily see Hellman arguing that such figures should certainly not be in the position of educating the daughters of the elite as teachers Karen and Martha have been doing in the private school they have created and worked hard to sustain. 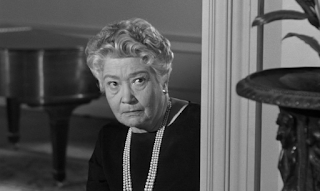 Certainly, in a time when large segments of our society have bought into the rumors and absolute lies of community leaders which has completely altered our political landscape and threatened our democracy, we cannot exactly dismiss Hellman’s concerns. What happened to these two unfortunate figures and the original Scottish schoolteachers Jane Pirie and Marianne Woods upon whose story this play and film is based is indeed an important lesson about how other seemingly credible and intelligent human beings begin to believe in lies when they are repeated time and again, adding their own outrageously twisted visions of reality. It might be interesting, given the current state of mind of the supporters of Trump who months after a fair election still claim that he actually won the presidency and those who have bought into the absurd views of QAnon, to see a new revival of Hellman’s warhorse. And it is thoroughly understandable why the 1951 revival of her play led many to believe that her work was intentionally meant as a criticism of the House Un-American Activities Committee. In that sense, we have admit that the Hellman play is still a powerful work that hammers home its themes of the malleability of those in power such as figures like Mrs. Amelia Tilford (Fay Bainter) when faced with half-truths and outright mendacity.

We might also congratulate Wyler’s 1961 production for a least reinserting the lesbian relationship which in his 1936 film version of the Hellman work, These Three, he had been forced to convert the trio’s loves into a heterosexual triangle by the Hays Code. Yet even his ability to accomplish that, which I discuss in my essay on that film, demonstrates that the film does not truly concern homosexuality. And indeed, as the actors correctly pointed out, the film never actually uses the words homosexual or lesbian, while Wyler and Hayes cut parts of the dialogue which spoke more specifically about the love between the two women.

In truth, accordingly, the brouhaha surrounding Karen and Martha’s school is centered about her young students’ and their irresponsible parents’ determination to withdraw their children from the institution because the two were heard confessing—get ready for the shock—they loved one another. Evidently even love between two women who had been friends since the age of 17 was enough to create a public scandal which they could not escape even by moving to another part of the country. Indeed the entire drama is based upon what is likely the young girl’s whispered accusation: that seeing the one give a loving peck to the other, that she saw to two embraced in a kiss. 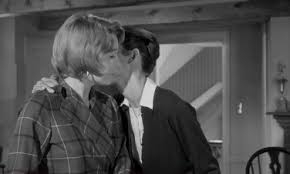 Hellman’s lack of interest in just how true lesbians survived is evidenced by scene in the film when Karen cries out “Other people haven’t been destroyed by it,” to which Martha replies, “They’re the people who believe it, who want it, who’ve chosen it for themselves.” Apparently you might survive the horrors this picture portrays only if you call down those terrors upon yourself. And lesbianism, moreover, is not represented as something to be enjoyed or treasured, but simply “survived.”

To describe this dramatic hothouse uproar even as a melodrama seems to miss the point. And to pretend it is a significant statement about lesbian love is just nonsense. The only moment that it truly comes alive is when, after all of what she herself has perceived as lies and false accusations about her feelings for Karen, Martha suddenly realizes that, in fact, she does possibly have feelings “of the other kind,” meaning lesbian desire for her friend. In a sense this almost redeems to  Hellman’s flirtation with the subject, presenting us with a kind of hysterical “coming out” on stage, so to speak, which given the strictures the play has already constructed can only end in suicide by gunshot in the original play and hanging in the movie. Frankly, I find this “inevitability” to be the most atrocious aspect of Hellman’s work. Even if we might imagine that the character herself sees her death as a kind of sacrifice to her lover, a permission for her to start over anew without all of the sexual confusion and self-doubts—evidenced by Hepburn’s long, head-held-high, walk past the film’s other figures whom she will not even deign to recognize by a glance in their direction—it truly represents a kind of pandering to homophobia. Martha is purified through her sacrifice and Karen freed from all self-loathing through her own sense of innocence and her lover’s final gift of release. 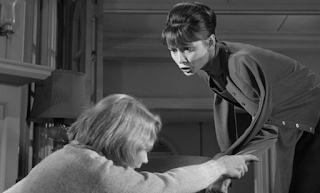 All of this fear and loathing, moreover, was concocted in the same years in which figures such as Ron Rice was identifying new possibilities for gay representation in The Flower Thief (1960), in which the Brothers Kuchar and numerous others were mocking Hollywood views of sexuality, filmmakers such as Pasolini and Bolognini were showing us how homoeroticism naturally existed in society in the male bonding patterns of macho street figures, and in which Truffaut was exploring a bisexual love triangle in Jules and Jim (1962)—which might have transformed even the stodgy These Three into something far more interesting. Two years earlier Hollywood itself had taken cross-dressing to new heights, questioning even whether or not it might actually transform a gay man into a woman in Some Like It Hot. In this context, Wyler’s film seems like a prehistoric monster standing at the brink of the LGBTQ pit, like Preminger’s Advise and Consent (1962), tremulously refusing to jump in and enjoy the fun.

In that sense in describing both Wyler’s The Children’s Hour and Advise and Consent I simultaneously feel both pity and contempt. And even the brilliant duo of Hepburn and MacLaine don’t quite escape the sour aftertaste of unintentional homophobia.