a coming out story for straights

Joseph L. Mankiewicz and Vincent Lawrence (screenplay, with additional dialogue by Mae West [all uncredited] based on a story by Louis Bromfield), Archie Mayo (director) Night After Night / 1932

If one can’t exactly describe Archie Mayo’s 1932 film Night After Night as contributing to our awareness of the LGBTQ community of the early half of the 20th century, you can still claim that it is somewhat LGBTQ aware, at least enough that it almost codes its gay and lesbian references, of which there aren’t that many.

No Hollywood pansies appear in Joe Anton’s (George Raft) high class speakeasy; indeed early in the film, when it looks like a competing crime family might want to end his life early and his close friend Leo asks him what kind of flowers he might like—in case it might end in his funeral—Anton answers: “Anything at all except pansies.”

His relationship with his close associate, Leo (the always wonderful Roscoe Karns) is quite obviously not a homosexual one, but it might as well be given the complete devotion Leo shows to his “boss,” arranging his daily flowers, breakfast, underwear, bath, appointments, and morning awakenings. Leo, Joe promises when he later makes it clear that he might be leaving the speakeasy business, promises to keep him near and dear wherever he goes. They are quite clearly companions for life and have a far more amiable relationship than Joe and his several women friends. 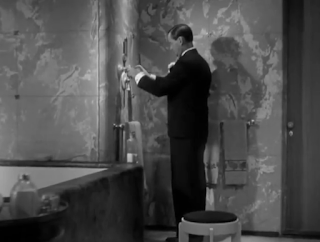 But the only real gay relationships presented in this film are lesbian, shown in brief clips of the speakeasy celebrants, and played out in a humorously coded manner through the accidental female friendship that develops between the unlikely “school teaching” elder Mabel Jellyman (Alison Skipworth) and the always quick-quipping and ready-for-anything Maudie Triplett (Mae West). 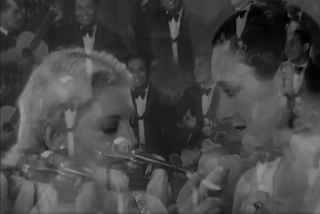 Mabel (“Miss Jellyman” as Joe always refers to her) has been hired to educate the rough-edged Joe into better manners, proper language, and the basics of the daily news for the very same reasons that Paul Verrall is hired to teach Billie Dawn the same things in George Cukor’s Born Yesterday (1950), to allow the character to properly enter into the company of high society, and in this case it also almost seems to backfire is some of the same ways.

Joe has invited his grammar-correcting educator to dinner with the woman of his dreams, Miss Jerry Healy (Constance Cummings), during which they accidentally meet up with one of Joe’s ex-girlfriends, Maudie, who in the several confusions of the evening, befriends the increasingly drunken Mabel, with the two of them finally winding up spending the night in Leo’s bed—without Leo. It’s not exactly a true “lesbian” pairing but it might as well as be given West’s usual acceptance of anything sexual that comes her way. At one point in this film, when Mabel asks her “Do you believe in love at first sight?” Mabel, in typical Mae West manner, pauses for second  before quipping: “I don’t know, but it sure saves a lot of time.” A few minutes later, when Mabel, who all her life has been looking for just a little excitement, asks, “Maudie, do you really think I can get rid of by inhibitions,” the girl snaps back, “Ah sure, I got an old trunk you can put ‘em in.” 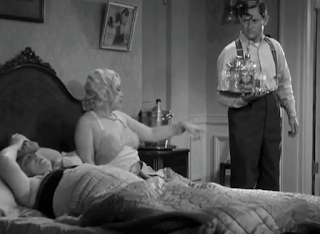 If nothing sexual happens in their nighttime bedding down together, something earth-shattering does occur the next morning for Mabel, who having missed her teaching gig, is hired by Maudie—whom Mabel has mistakenly perceived as the head of a prostitution ring—to become a hostess in her chain of beauty parlors.

That same evening ends for Joe in a quick kiss from Jerry Healy, which the next morning he reports over and over to his symbolic “husband-companion” Leo, in way that allows purposeful misreading (a trick of the tongue we might expect from the uncredited pen of  Joseph L. Mankiewicz, whose witty dialogue graced the gay friendly Diplomaniacs and other films such as Woman of the Year and All About Eve).

Joe: She kissed me.

Leo: You told me that before.

Joe: All right I’ll tell you again. You don’t mind, do you?

We know, obviously, that when Joe queries if Leo doesn’t mind, that he’s asking if Leo doesn’t mind that he mentions once more that he’s been kissed. But the construction of the sentence might almost seem to refer back to the act of kissing: “You don’t mind that she kissed me?” as if he needs to ask for Leo’s permission. This is particularly redolent with meaning since Joe does almost ask for Leo’s agreement with everything else he does, including selling his business, which Leo strong advises him not to do.

The point of all this is not to suggest that Mabel and Maudie or Joe and Leo have same-sex desires, but simply, given their intense relationships with one another, that the author and director toys with the possibilities behind the censors and simply movie-goers backs. Even pre-code, that’s about all filmmakers felt they could do with gay allusions in their films.

But this is, after all, a film quite centered in outsider sex and the desire to enter a world seemingly unobtainable to the lovers given their natural natures. The central love story here, between the former box, now gangster Joe and the Park Avenue socialite—who grew up in the very mansion where Joe’s speakeasy now exists—Jerry Healy is a heterosexual relationship that is nonetheless quite queer. 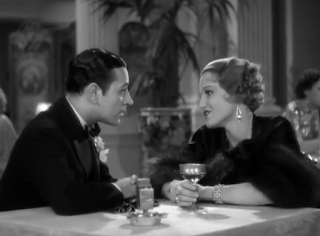 From Joe she seeks the “excitement,” and “thrill” that has been formerly missing from her sheltered life; while in Jerry, Joe is looking for something more refined and better than the world in which he has previously existed. In a sense, both are seeking out a kind of security not currently available to them. Jerry’s family money has evidently been lost over the years so that she is considering marrying a man she doesn’t genuinely love, Dick Bolton (Louis Calhern); Joe, stuck  with the coarse, jealous gun-carrying Iris Dawn (Wynne Gibson) is looking for a way out of the dangers he daily encounters to a life of “vision,” a world that instead of being simple lived day by day, includes a picture of a better future in it. He has the money—particularly when he sells his business—and she has the refined sense of life that together might make them the perfect couple, if only they can escape their own misconceptions and prejudices. If this sounds familiar, it might almost read in these pages as yet another “coming out story,” as indeed it is.

Night After Night is a kind of heterosexual “coming out” or “coming of age” yarn, where the two lovers have to escape the restrictions their births, “family” (in this case read friends), and education or lack of it have created for them to realize that they might live in an otherwise challenging world as a happy couple.

Just as Maudie helps Mabel Jellyman get rid of her inhibitions to discover a whole new life for herself, or as Leo will surely discover in giving up his role of petulant companion to become a trusted friend, so does the interruptions of the outside world —in this case in the form of extreme violence—help Joe and Jerry to finally reveal at work’s end their true selves and, in the process, come to realize that being the odd couple they are they can surely teach one another how to survive and stop being so very lonely in their lives.

If on the surface, this short feature might appear to be a strange work that doesn’t quite fit any of the genres it toys with—noir, gangster film, screwball comedy, class melodrama—it, nonetheless, finally becomes something all its own, a kind of “coming out” dramedy for straights.