I might not even have included a discussion of Sarah Bernhardt’s 1.23-minute dueling episode playing Hamlet to Pierre Magnier’s Laertes were it not for the fact that it is probably the very first cross-dressing role ever to be filmed.

The film which was shown on October 1, 1900, may have come after Alice Guy Blaché’s cinematic representations of female dancers performing with cross-dressing female partners, but Bernhardt had already performed the entire Hamlet in drag on stage the year before, with major performances in both Paris and London, so that her brief enactment of Hamlet’s death in Act V predated the dancers—although they may have also danced as crossdressers onstage previously as well. It truly doesn’t matter since neither has much to do with LGBTQ issues except for the blurring of gender. 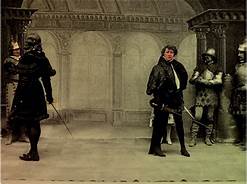 More importantly, Bernhardt’s cinema debut is interesting in how it relates to Asta Nielsen’s far more significant appearance as Hamlet in Svend Gade and Heinz Schall’s film of 1921. If director Clément Maurice’s Le Duel d'Hamlet is centered upon a female playing a male role in a man’s costume, Gade and Schall’s Hamlet is centered upon a transgender figure, a woman who is not only “dressed” as a male but has lived as one throughout her/his entire life until college days at Wittenberg University, when Hamlet is called home because of the father’s death and the uncle’s upcoming marriage to his mother. Nielsen’s performance is one of the first major works, along with Mauritz Stiller’s Vingarne (The Wings) (1916), Richard Oswald Anders als die Andern (Different from the Others) (1919), and Bernard Natan Le Ménage moderne du Madame Butterfly (1920), to actually focus directly on LGBTQ images and issues.

In relationship, Bernhardt’s very brief performance is simply a footnote. But it is an interesting nod to queerness, nonetheless. And evidently her Hamlet, performed in its entirety on stage, was quite different from the most popular male performers of the day, although little of that is in evidence in this piece, which amounts to nothing more than a “clip” shown at The Exposition Universelle with a synchronized wax cylinder recording providing sound, the cylinder now lost.

An actress of the day, Elizabeth Robbins provided a written summary of Bernhardt’s stage performance, when the great actress was 55 years old, that might provide us with some illumination about Bernhardt’s complete performance:

“Madame Bernhardt’s assumption of masculinity is so cleverly carried out that one loses sight of Hamlet in one’s admiration for the tour de force of the actress… She gives us…a spirited boy; doing it with an impetuosity, a youthfulness, almost childish.” In the scene in which Hamlet advises the theater troop how to perform, she behaves as “a precocious young gentleman, who…thoroughly enjoys laying down the law to plodding professionals”. And in the play scene, “with something a little reminiscent of an urchin swarming over an orchard wall, [Hamlet] crawls up to the throne, till his eyes, not sombre and horror-stricken, but keen and glittering, are on a level with the King’s. When he has surprised the guilty terror there, this Hamlet actually bursts out into peal on peal of laughter. His clever trick has succeeded, his Schadenfreude overflows.” Certainly, this was not the typical melancholy Dane on the edge insanity as most males of the day performed the pondering hero.