Grandpa's Girl (1924) at first seems like yet another silent film centered around a cross-dresser, in this case a young wealthy school-girl who—because she attempts to get purposely expelled from her school so that she might join her grandfather on a European voyage—is forced to become his hired “grandson” when, in retaliation for her acts, he disinherits her and advertises for a new “grandson.”

If one is willing to accept this absurd plot device created, it appears, so that Jean Bradley (Kathleen Clifford) can change into boy’s britches, then I guess you can easily accept the even more absurd series of events that follows. Yet some of these meanderings into the gender shift offer some fascinating discussions, far ahead of its time, about how to “cure” effeminate men and what to do when as a woman you are ordered by your pretend (and actual) grandfather (Jack Duffy) to marry another woman who is not only dim-witted but is absolutely ugly and grossly overweight. And I haven’t even yet quite assimilated the problems the movie presents when the granddaughter- turned-grandson decides to transform her/his self yet again into a kind of flapper whom her lascivious grandfather is nearly ready to rape or, alternatively, to run off with and marry. And what, finally, do you do with a granddaughter, former grandson, once you’ve disinherited the both of them, when she/he suddenly announces her love for grandpa’s male secretary Teddy (Jimmie Harrison)?

Clearly, Gilbert Pratt’s comedy is not just a run-of-the-mill cross-dressing comedy. With this movie it’s as if the cinema finally realized that there were possibly serious consequences about successfully pretending you were another gender, even if previously Zapata’s Gang, Mabel’s Blunder, and, most importantly, I Don’t Want To Be a Man had grasped that once the change had been made, it was not always so easy to return to whatever you previously thought was “normal.”

In short, exploring gender meant also exploring sexuality and society’s ideas about what gender and sex meant. One might almost say that the intentional outward confusion was suddenly perceived as leading to a kind of inner confusion that is more difficult to resolve.

The problem for Jean is that she is a spoiled rich girl who begins the film packing up several large trucks of her wardrobe before she commits her final assault against the hated establishment when she has spent her youthful days. Her trick is to replace the ancient Egyptian beehive which a guest lecturer is demonstrating to her classmates with a real beehive, so that when he throws his treasure down on the floor to prove its become as calcified as rock (the film doesn’t even try to explain why a scientist would want to hurl his prize treasure to the floor) opens up with a nest of real bees threatening to sting everyone sitting in the classroom. It works only too well, and the girl is sent home, only, as she is about to depart, to receive a letter disinheriting her for actions (Pratt  does not attempt to provide a logical answer as to how the grandfather has heard about her behavior so very quickly) and announcing his search for a new grandson. 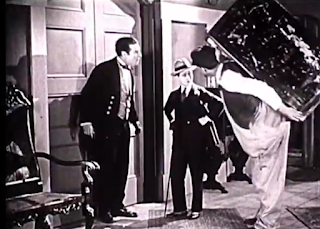 Showing up with the others applying for the job, she simply tells them that an applicant has already been accepted for the job. And Grandpa Bradley seems delighted with the new boy, Oswald, in his house, demanding that Teddy, his secretary, immediately take him upstairs and give him a bath. Although the new grandson insists upon his cleanliness, the Grandfather insists upon his male secretary washing him down, another inexplicable wrinkle in a plot that evidently doesn’t really matter to Pratt.

Besides, the director never follows up on what might have been a comic scene of delusion or  deception, since almost immediately after two Fortune Hunters, daughter and mother (Babe London and Lila Leslie) show up at Bradley’s door to court his young grandson. Even if the girl looks more like a hippopotamus than a potential lovely daughter-in-law, the old man is convinced that the girl’s absolutely perfect for his new grandson, who immediately discovers that his new fiancée is so overweight that when she slips to the floor there is no way that anyone can lift her back in upright position. Roscoe “Fatty” Arbuckle might have easily played this role, except that in drag he is far more feminine and daintier. 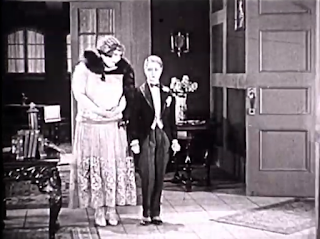 To celebrate the occasion of their upcoming nuptials,  the grandfather makes an appointment with the shady duo at the Café Royal for that very night.

In the meantime, Teddy sneaking a look at his new charge through a keyhole, discovers the boy applying makeup to his face and runs downstairs like a good little soldier to report the boy’s strange behavior to his boss. The grandfather also sneaking a view through the keyhole is shocked by what he sees, declaring “There will be no creampuffs [read: gay boys], in my family” and immediately calls for the biggest prizefighter to come and wallop the daylights out of him.

By this time already Teddy must have developed some affection for the boy since, we are told, he tips him off about his grandfather’s intentions, and we see the Oswald attempting to work out. But upon confronting the beefy prizefighter in the flesh, he immediately knows there is no hope. Yet when the sparring begins a series of accidents and literal comedic “slip-ups” suggest the boy has won the bout. But outside the door, not knowing what kind of beating Oswald is taking within, Teddy pleads for the boy’s safety while his grandfather grins in delight by the fact his grandson may soon have had the queerness beaten out of him. When the old man finally opens up the door he witnesses what appears to be Oswald’s final blow to the prizefighter’s mug, sending him sprawling to the floor knocked out.

Still unconvinced his grandson is “cured,” Grandpa Bradley himself puts on the gloves ready to spar with Oswald, but is hardly grazed before he hits the floor, Oswald and Teddy together attempting to fan him back to consciousness. 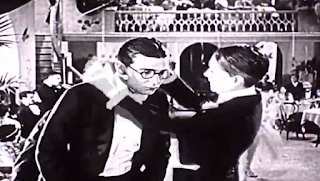 At the engagement party we see Oswald himself taking a liking to Teddy observing, “You look really spiffy tonight, Teddy,” as he briefly straightens up his friend’s hair.

Hardly are they seated before a gypsy dancer enters the floor, Oswald pretending great interest in her gyrations as his grandfather, declaring the boy is too young to flirt, demands they change chairs. It’s clear that despite his old age, grandma has lost none of his libido. “She’s a pippin,” he declares, almost jumping out of his seat with delight.

Fed up with the old man’s chauvinist attentions to the dancer and, just maybe, still sore at having him attempt to drive any feminine manners out of his male persona, Oswald quickly gets up and disappears. 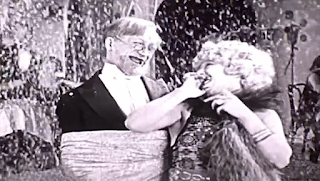 When the gypsy dancer finishes her number, the host announces a special guest for the evening, “an added attraction.” Out comes Oswald/Jean dressed as a vamp, with curly blonde hair, fan, and feathers. So aroused is the old man by her gyrations, the applauding crowd, and the shower of confetti that suddenly appears out of nowhere that he stands up and begins to dance with the femme fatale, unwinding her gauzy outer garment to reveal her in flapper shorts; Oswald, at the very moment when his grandfather his about to kiss him, pulling off his wig —Victor/Victoria style—greeting him “Hello, grandpa.”

Furious at the turn of events, clearly not only for the deception but that the boy has clearly not abandoned his feminine ways, Grandpa Bradley chases him around the cafe, several males following in an attempt to pull him away from to the kid, finally all throwing the old fool out onto the street. 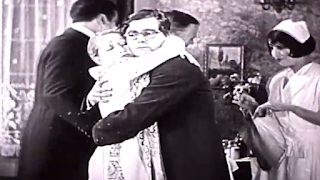 In the final scene the randy Grandpa is flat on his mattress, with nurses in attendance. Despite his condition, he rises up out of bed to personally throw Oswald out of the house, calling for his now “beloved” granddaughter. Teddy quickly shows her into his room as her grandfather greets her with open arms, telling her that he is through with grandsons. But while he isn’t looking Jean takes off her female wig once again to reveal Oswald underneath, the grandfather once more utterly rejecting his offspring. But this time Teddy speaks out, saying that if “You don’t want her, I want her,” the pair hugging with joy. By this time, quite obviously, we don’t know whether Teddy is in love with Oswald or Jean, but it doesn’t seem to matter. Besides, Teddy has almost playing the role of a neutered figure in the Bradley house all along, and perhaps he is unsure of his own sexual desires.