you can always go home again

Robert Rossen and A. I. Bezzerides (uncredited) (screenplay, based on a novel by Ramona Stewart), Lewis Allen (director) Desert Fury / 1947

Desert Fury (1947) is a hothouse of a movie comparable to Douglas Sirk’s later Written on the Wind (1956), this film shot in Technicolor by Edward Cronjager and Charles Lang with scenes of stunning desert landscape and intense melodramatic encounters within bedrooms, living rooms, and offices accompanied by the constantly swelling strains of a score of Miklós Rózsa. And indeed British-born director Lewis Allen’s credentials (The Uninvited, reviewed elsewhere in these pages, The Unseen, and The Imperfect Lady of the same year) with his film’s mix of soap-opera, mystery, and ghost film genres puts him very much into the same context with figures such Sirk, Nicolas Ray, and others. 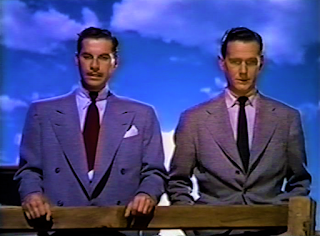 Indeed Desert Fury contains elements of all three genres, particularly the first. But it also quickly becomes a mystery when, without apparent reason, the film begins with the sudden return of two of the desert town Chuckawalla, Nevada’s natives, Paula Haller (Lizabeth Scott) and Eddie Bendix (John Hodiak), Paula seemingly in a hurry to get home and Eddie stopping by a bridge—where we later discover his wife was killed in an automobile accident—not sure whether he really wants to settle back into Chuckawalla life. But then neither is Paula sure she wants to return permanently to a town where most of the girls her age look down on her for her mother Fritzi’s activities as the owner of the Purple Sage, the local gambling establishment. 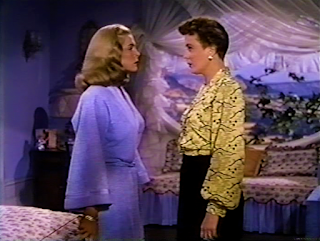 Paula has just left yet another school to which her mother has sent her to become a refined and educated young lady, but the beautiful woman wants nothing to do with refinement nor, apparently, with becoming wiser. If she misses the fresh air of the desert and, just perhaps, the company of the local sheriff Tom Hanson (Burt Lancaster), her real draw, whom she’d most love to escape, her mother Fritzi (Mary Astor), who is so powerful as a kind of amazon force that even she feels safe in the fact that her daughter will never truly be able to leave her. It is hardly coded if we feel we can describe her mother—who, we later discover, often slept with her daughter when she was a child—as having something close to a lesbian relationship with her daughter. Without a father (who has apparently died, perhaps murdered, when Paula was an infant) the daughter has been so overpowered by her mother’s love for and definition of her that the two have developed  love and hate relationships that go far beyond the confines of a mother-daughter affair.

Eddie also arrives with someone upon whom he is utterly dependent, his “friend” Johnny Ryan (Wendell Corey) who has been with him for most of his life and with whom he soon perceive that he is so intricately intertwined that once again you could hardly describe their relationship as coded. When Paula, later in the film asks Eddie how he met Johnny, the gangster replies:

It was in the automat off Times Square, about two o'clock in

the morning on a Saturday. I was broke, he had a couple of

dollars, we got to talking. He ended up paying for my ham

that night. We were together from then on.

You don’t describe “going home with someone” if you’re intending to sleep on their living room couch for a few days, and you don’t stay together with someone for most of your life if there isn’t something more than a relationship with a “best buddy” or “close advisor” going on. And when we later discover that even while he was married to the woman who everyone reports looked a lot like Paula, Johnny still lived with him I think we can safely report that the connection between Johnny and Eddie is homosexual.

The film, aired in 1947, is obviously not openly suggesting that mother and daughter or Johnny and Eddie are having “sex”—that would be impossible if you wanted to have your film screened, and this work, produced by Hal Wallis Productions and distributed by Paramount Pictures was a true Hollywood production, so there no escaping the Hays Code in the year I was born. But as Eddie Muller, San Francisco film critic who as authored several books on Hollywood cinema, particularly noir films, observes: "Desert Fury is the gayest movie ever produced in Hollywood's golden era. The film is saturated—with incredibly lush color, fast and furious dialogue dripping with innuendo, double entendres, dark secrets, outraged face-slappings, overwrought Miklos Rosza violins. How has this film escaped revival or cult status? It's Hollywood at its most gloriously berserk." 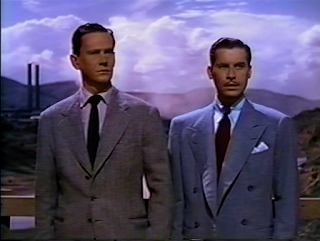 And yes, Johnny is a gangster who apparently hooked up for a while with Fritzi back in the old New Jersey days before she had to move West for her mysterious (the film never reveals its nature) illness. But why Robert Rossen and A. I. Bezzerides’ screenplay keeps suggesting that Paula has an uncanny resemblance to the former Mrs. Bendix is inexplicable. Are the writers somehow signaling that the relationship between Fritzi and Eddie was deeper that they want to outwardly proclaim, that the other woman was, preposterously, an older sister of Paula’s? Was incest also one of Eddie’s crimes?

All we can know from what Fritzi tells Paula and what her sheriff friend Tom hints is that Eddie is no good and dangerous for a pretty girl who is still “wet behind the ears”—and here we are entering Written on the Wind territory—which is, of course, why she immediately falls in love with him. 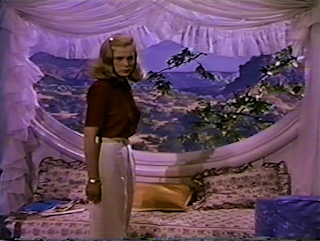 In movies like Allen’s and later, Sirk’s and Ray’s films, good girls never fall in love with the right man, which is what gets the pot of the plot into such a boiling frenzy. As bad and controlling as she is, as “too-good-to-be-believed” as he is, Fritzi and Tom cannot keep the rebel Paula locked away in her bedroom for long. As she keeps repeating, she’s got her mother’s bad behavior in her blood and she’s just naturally attracted to evil gay gangsters like Eddie.

Even Johnny’s abuse and open abhorrence of the potential home-breaker doesn’t give her pause, as she weaves the weak Eddie around her finger, demanding that he get rid of his “life-long friend.” When Eddie finally does get around to telling his lover to get lost, it is utterly clear that the idea is incomprehensible to Johnny. While realizing that Eddie may have romantically fallen for Paula, he insists he will still hang around. But when Eddie tells him he actually has to leave the premises, the look on Johnny’s face is one of utter confusion and terror at the same instant, a kind of sickness until death. 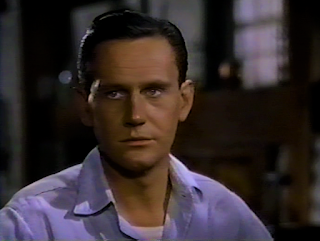 Finally when the true mystery is revealed, when Johnny, no longer caring enough to try to protect Eddie or himself, tells Paula the truth, that Eddie does not truly exist but is a weak puppet manipulated and given credibility as a human being entirely by Johnny, we feel almost as foolish as Paula for not having realized that the passive aggression we observed in Johnny’s demeanor defined the two men’s existence together.

Having now broken Hays code restrictions, revealing the true nature of the way the two men actually functioned as a couple, the script has to destroy the queers. There is no way around it: Eddie shoots Johnny dead and runs himself—in a pretend chase to bring back Paula—off the same bridge which he has previously forced the look-alike Paula’s car.

So now Paula no longer needs to leave her mamma. She can stay right in Chuckawalla, or at least nearby in the farm Tom Hanson has always wanted, with her as his forever happy wife. Order is returned without even having to cut the proverbial apron strings. And since Tom is well-liked by everyone in town, we can be certain that eventually Paula will become a scion of Chuckawalla society, just what her mother wanted for her, and even at one point in this fable, attempted to buy for her daughter.

Posted by greenintegerblog at 12:03 PM