Lowell Sherman | She Done Him Wrong

the hawk swoops to pray

One might have thought that the pre-code film She Done Him Wrong, starring Mae West—who wrote entire plays with male gay and lesbian characters and who herself always dressed in gowns and night wear with bangles of jewels hanging from all ten fingers and two wrists that seemed in her apparent discomfort to represent a kind of outrageous drag costume—would have a great deal of LGBTQ content. Even more so given the fact that her co-lead in this film was Cary Grant, the man I describe elsewhere in these pages as determined to lace nearly movie in which he appeared with coded queer dialogue and events.

But Lowell Sherman’s work basically stays stuck in the heterosexual rut that leaves West, playing Lady Lou, most vulnerable, in this case even before she appears demanding that every male member of the cast tout their lust over her undeniable beauty. By the time Lou shows up, having just returned from a shopping spree, she is hard put, given the purposeful artificiality of her posture, language, and attire to match the testimonies of her incomparable loveliness by the tough ward manipulators, drunkards, and hangers-on who inhabit Gus Jordan’s (Noah Beery, Sr.) grand drinking establishment in which she performs. 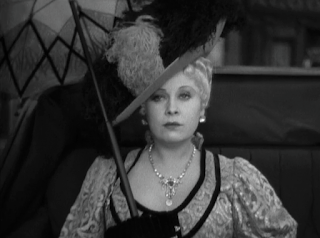 Despite the arrival of Jordan’s evil cohorts, Russian Rita (Rafaela Ottiano) and her pretty boy gigolo assistant Serge Stanieff (Gilbert Roland)—who, despite my attempts to squelch the image, kept reminding me throughout of the cartoon figures of Boris and Natasha in Jay Ward, Alex Anderson, and Bill Scott’s The Rocky and Bullwinkle Show—who help Jordan unload his counterfeit money, most of the film consists of West getting into and out of costume while delivering up her endless sexual innuendos that made her famous.

There are several good ones in this film, including her often repeated “Come up and see me sometime. I’m home every night.” When Serge expresses his delight in meeting her, adding “I’ve heard so much about you,” Lady Lou cracks, “Yeah, but you can’t prove it!”  When Rita describes Serge as her new assistant, Lou naturally asks, “Day or night work Rita?” At another moment the singer insists, “I haven’t always been rich. There was a time I didn’t know where my next husband was coming from.” Busy trying to rope in an interested male, when told by her maid Pearl (Louise Beavers) that her bath is ready, Lou shrugs, “You take it, I’m indisposed.”

The plot centers around the corrupt Dan Flynn’s (David Landau) attempt to regain control of the ward, stolen from him by his rival Jordan. With that power comes the grand prize of Lady Lou herself. Flynn has hired the undercover detective nicknamed “the Hawk” to help uncover the dirty doings of Jordan, without himself even knowing who the Hawk is and what he looks like.

Meanwhile, Lou’s previous boyfriend Chick Clark (Owen Moore) has just been sent up the river for his crimes, set up also by Flynn; and simultaneously, troubling Clark to no end, Lou has settled into an affair with Jordan. Despite Lou’s lack of knowledge of Jordan’s dirty doings, accordingly, she is boxed in by the men in her life, particularly when Clark escapes from prison. If Jordan is determined to keep her as his lover, Clark wants her to come back to him, while Flynn looks forward to the day—when he puts away Jordan and the police recapture Clark—that Lou will take up with him.

As if that weren’t enough, Serge can’t control his urge to make love to his new acquaintance, which ends, after the jealous Rita finds Lou and Serge in each other’s arms, in Lou accidently stabbing Jordon’s Russian cohort. 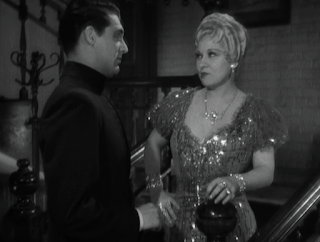 And finally, for reasons beyond explanation, Lou has taken an interest in the mission head next door, Captain Cummings (Grant), who intrigues her primarily because the lean and handsome young man is most certainly, as Lou puts it, “different.”

One might have imagined that that description alone might have given Grant his usual out from fully performing his required duties as the straight male hero, but in this film the director permits him little squirming room, as it turns out that our mission boy is really the Hawk, who discovers that Jordon and Russian Rita have been using young girls like Sally (Rochelle Hudson) by involving them somehow in their money schemes.

With one fell swoop Hawk gathers up Jordan and his gang and the escaped Chick, hauling them off to jail, while he expresses his own personal plans for Lady Lou, popping a wedding ring on her finger. A bit like the ending of Guys and Dolls, it’s hard to imagine the marriage between a convincing mission boy and a highly experienced “woman of the streets”—even if early in the film Lou describes herself as “one of the finest women who ever walked the streets!”—getting together in eternal bliss. As Lou has described the mission man earlier on to Jordon: “He’s the kind that women have to marry to get rid of!” If Lou hasn’t yet “done him wrong,” it appears she certainly intends to. And what about the missing corpse of Russian Rita? 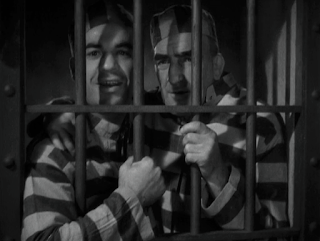 But unless you include all the campy, drag-queen-like posing West enacts throughout this movie—which is perhaps necessary if you want to truly comprehend West’s role in gay iconography, a position she earned, in part, because she performs femininity in the manner of a transvestite—there is only one truly LGBTQ moment in She Done Him Wrong. Convinced by her friend Spider Kane (Dewey Robinson) that it would be in her best interest for Lady Lou to visit Chick Clark in jail, she saunters down the hall to his cell where one after one the prisoners call out to her, recognizing her as a friend and former lover. At one point we see two men in one cell, their arms wound around each other, who Lou describes as the Cherry Sisters*—evidently two fruits who are bound to one another.

*In real life, the Cherry Sisters were 4-5 sisters from my hometown of Marion, Iowa, who in the early 20th century took to performing on stage, later becoming a famous vaudeville act. As National Public Radio’s Linton Weeks described them: 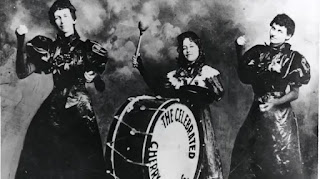 "People enjoyed tossing tomatoes and whatever at them," says David Soren, acting curator of the American Vaudeville Museum Collection at the University of Arizona. "The Cherry Sisters were generally regarded as the worst ever."

But the Cherry Sisters also signified something else in American comedy history. In the tradition of Tiny Tim, Andy Kaufman and certain other deadpan comics, the questions always hovered around them: Were they sincere? Were they in on the joke? Did they even care what people thought?

One day while my family riding through the streets of the nearby city of Cedar Rapids, we observed several fire trucks rushing to a large home near the old Van Vechten mansion. We stopped to watch the fire, my parents telling us that the burning house was the home of the notorious Cherry Sisters.

Posted by greenintegerblog at 9:52 AM