As Emilio Martí López noted in his insightful essay on Norman McLaren “McLaren’s Closet: Expressing and Hiding Homosexual Desire in Norman McLaren’s Filmography Through the Reinvention of the Body and Space,” the mostly abstract and animated films of the noted Canadian filmmaker were hidden and coded works since the author, working before gay liberation at the basically liberal NFB (National Film Board) of Canada which, accordingly, was carefully watched through the Cold War by the Royal Canadian Mounted Police. One’s dress and hairstyle or even a casual discussion opera might lead to one’s dismissal for being a homosexual. McLaren’s cinematic contributions were, accordingly, definitely part of what Vito Russo described as "The Celluloid Closet.”

Unfortunately, not all of McLaren’s films have yet been discussed in the LGBTQ context, but with the help of Martí López and others such as Thomas Waugh, I have been attempting to reconsider as many of his films as possible. Perhaps one of the easiest of these is his 1952 eight minute short Neighbours, a bit easier to “read” simply because it involves live human actors instead of animated animals and symbols. Even here, however, things often appear to represent the opposite of what they seem to be suggesting.

This film consists of two human cartoon-like men who, living next door, who obviously get on well, even if they read the same news from slightly opposite perspectives, one newspaper headline reading “Peace Certain If No War” and the other “War Certain If No Peace.” But it is clear, even from the shape and outline of their two cartoon houses in the background that they somehow are the mirror image of each other and would be better off if they could join forces, their seemingly “half” houses becoming a whole. 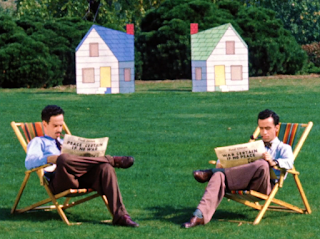 They sit with their bodies half directed toward in each other, both with Oxford shoes, brown-toned pants, and blue dress shirts with ties hooked round their necks, one a bowtie and the other a regular necktie. Both have black hair and both are smoking pipes. Given the perspective they seem to be sitting on the very edge of their property lines about as far away from their houses as they can get which might be saying something about whatever is within and their relationship to it. In any event, they seem comfortable at being mirror images of one another, suburban-living males who still can treasure the trees and grass growing around them. This reads almost as a Canadian version of Leonard Bernstein’s suburban opera fantasy, Trouble in Tahiti, without, at least in the few first sequences, any apparent “trouble” in their paradise.

That is until something strange happens. A small yellow flower, which from a distance might almost be identified as a dandelion, struggles into the sun popping up in the small distance between where they have placed their feet about half-way between where they sit and their houses. 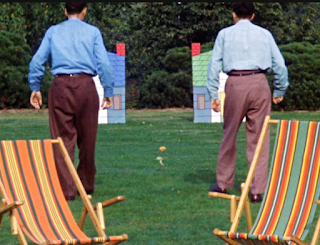 In unison, they both stand and walk toward it, the man on the right (I’ll call him the clean- shaven man, the other, the man with a moustache) demonstrates his delight in its sudden arrival. The flower itself seems to curtsey to each of them before bowing down for a second and standing erect once more.

You half expect the other one to be offended by such a weed growing on or so near to his property, but he too sniffs it, showing his utter pleasure of its existence. Clearly these are not quite your typical macho homeowners who might immediately pull out their pruning shears and snap it off or, at the very least, push out their lawnmowers and return their yards into a pure green expanse. 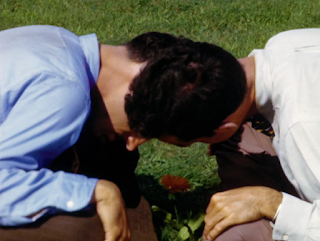 Indeed these men carry their joy a bit further, the man with the moustache rowing through the grass in joy on his buttocks, as he returns to the other when they both bend down again to smell the flower, wrapping their heads in union around it in opposite directions and shifting them in the opposite direction in almost what  might be interpreted, from a distance, as a mutual kiss.

They stand, look at one another, join hands and begin a series of seemingly animated balletic movements, leaping into the air and pirouetting through space, while spinning and reeling through the air in absolute terpsichorean delight. 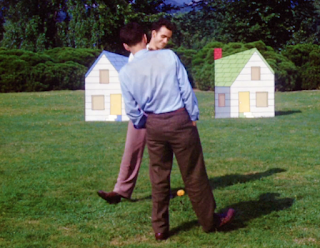 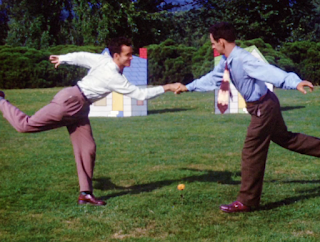 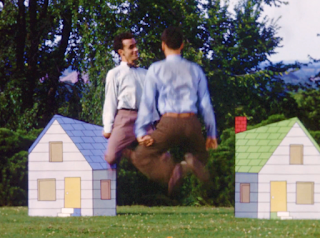 These are not at all your typical suburban male neighbors. In fact you can only say given their graceful maneuvers they are extraordinarily “queer” in the ordinary meaning of that word. These suburban dwellers have something more in common with Bugs Bunny and Wile E. Coyote or even the Roadrunner than your Sunday suburban family man. The East Texans have a word for folks who possibly cross over the sexual lines; these men are definitely “loose in their shoes.”

But the same wild energy they show in their pleasure remains buried within; and their obvious joy becomes something that both men have so longed for that they now desire to hold onto it, to possess as their very own, as if were something akin to their very identities.

The flower they might have easily shared becomes the source of a territorial fight, a battle of possession which they express by both insisting that the flower is growing on their property, not in that indeterminable area in-between. For if they admitted that the flower belonged to both of them it would also mean that they would have share themselves, at least regarding their own feelings about the flower and, just maybe, the physical bodies wherein those feelings reside—a total impossibility for the place and time in which they exist. To be good neighbors is one thing but to actually “love thy neighbor”—which becomes, in fact, the moral of this fable—is too dangerous of a concept to admit. 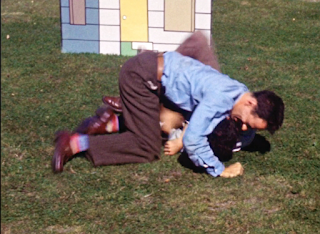 The only way these men know of how to truly touch —including expressing their true feelings for—one another is through contact sports, in which they soon engage. As they build a fence between them in order to protect their new prized treasure, the very word quickly leads to the idea of “fencing” and ultimately to wrestling, which ends in actual wounds and pain, the very opposite of the pleasure they are trying to protect.

Their “sport,” moreover, quickly turns into battle and spires out of control into the war of which the headlines warned them at the beginning of this film. As we know, war nearly always inevitably ends by involving and hurting the innocent who suffer the warriors’ increasing anger and frustration. 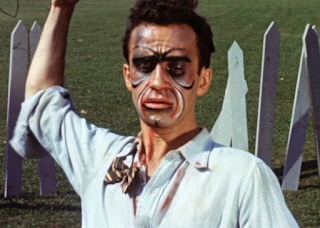 As Martí López argues, like Dorian Gray, their hidden violence suddenly becomes evident in their own faces, which is now revealed in the childlike war paint they suddenly wear. As they tear down their cartoon edifices to reveal behind them their wives and babies, they too are violated and destroyed as if their were mere mannikins or dolls.

The flower for which they are fighting has died in the battle, and at last both men fall on the battlefield of their respective territories, apparently dead.

Martí López summarizes what I have been saying from a more traditional psychological perspective:

The neighbours of this film, faced with the appearance of (homosexual)

pleasure that the flower represents, act with the violence of repression:

the very fence that is erected is a metaphor of their internal defences,

those defences that closeted homosexuals are specialists in

constructing in order to hide their feelings and sexuality from

the world and from themselves. Furthermore, this wooden barrier is

yet another of the film’s  phallic symbols: the way in which a

neighbour threatens the other with one of its vertical slats would

be a subconscious invitation to the sexual game with an erect penis.

Neighbours is thus a tirade against violence, but also a reflection on

between the men would, therefore, be a way of venting sexual

tension, a theory that is applied to “contact sports, extreme fighting”

but also precisely to “cinematic or videographic warfare”—safe

Having fought a symbolic sexual battle both within themselves and with each other in space, and in so doing having done away with any pretense of family ties, we see them in the last frames buried next to one another like a married couple. Yellow flowers creep upon the grass-carpeted rise of their graves, one on each, singular but matched as these two sexually repressed neighbors were forced to be throughout their active lives.

So does McLaren explore within his simple fable about waring neighbors a sublimated tale of homosexual desire repressed by the “pretend” society in which they exist. Just as in Bernstein’s suburban opera, “behind the front door of the little white houses” in.... “Scarsdale, Wellesley Hills, Ozone Park, Highland Park, Shaker Heights, Michigan Park, and Beverly Hills”...and yes, even Scarborough,  Etobicoke, and Vaughan is homosexuality, loneliness, and fear. “Ratty boo.”