R. E. Williamson and Joseph E. Zivelli | A Wanderer of the West

out with the boys

After a couple of years of trying to track down this film, mentioned by Vito Russo in his The Celluloid Closet, I determined to treat it more like a lost film, writing about it from other’s commentary. Even as this book goes to press, I am still seeking a copy, but some now list it as  “lost.”

Nonetheless, one can get a good idea about this film, which is perhaps not so very interesting except for its one major “gay” scene. 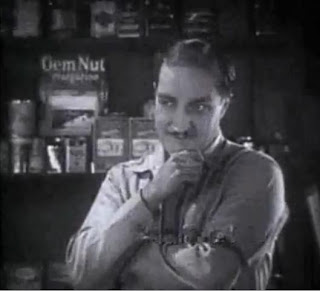 Overall, this movie apparently is not at all interested in LGBTQ themes. The central story involves the attempt of a local rancher to take control of the nearby Lazy Y Ranch, which, as in the Australian film Rangle River (1936), controls the water rights for the local area. In order to take over that ranch, that rancher kidnaps the daughter of the Lazy Y, but the ranch foreman (Kermit “Tex” Maynard) manages to foil the plot and win the girl. 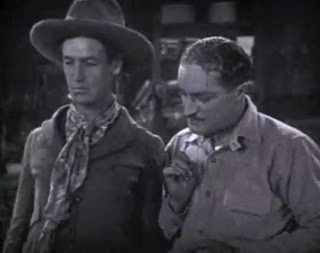 The reason this film is of interest to Russo and other LGBTQ commentators such as me is one scene in which he meets Clarence (Al Rogers) in a bar. Clarence—a name often assigned to gay figures*—is described in an intertitle card as “One of Nature’s mistakes in a country where Men were Men,” assuring that the audience will be quickly able to interpret his reactions to the lanky ranch foreman. Clarence amply ogles the cowboy, prissily brushes some lint from his shirt, and, leaning on the cowboy’s shoulder asks, according to the title card, “I wonder if you’re going out with the boys tonight?” 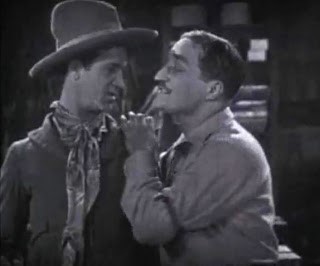 The foreman, after a quick double-take, pushes the annoying sissy away with irritation.

Without seeing the entire film one, obviously, cannot know whether this is simply a normative put-down, or whether it represents a more exuberant acceptance of “nature’s mistakes.” But the very fact that the authors and directors chose to include such a figure, presenting him through a series of frames, demonstrates, if nothing else, their interest in the “other.”

The available pictures say more than words can express.

*According the to blogger of the British website “Streetlaugher: A Gay Calvacade Comic Stereotypes,” Clarence and Leonard were names that signified gay characters in early film history. You might recall that in North by Northwest the villain’s devoted male secretary in Alfred Hitchcock’s North by Northwest was named Leonard (the character played by Martin Landau, clearly in love with his employer Phillip Vandamm (James Mason).