Director Richard Thorpe worked for years on silent and early sound films that were known for their extremely low budgets. Since he had so little money for his productions, Thorpe generally filmed only one take of each scene, thus assuring the low quality of his movies. In the industry he became known as “Mr. One Take,” and it was not until later in his career, when he directed several of the Tarzan and Lassie films and musicals and comedies of the 1950s and  1960s such as Follow the Boys, The Horizonal Lieutenant, Ten Thousand Rooms, Jailhouse Rock, Three Little Words, and The Great Caruso that he received any significant credit for his talents, yet even these were often grade B movies.

Most of the critics hint that his 1930 early talkie, The Dude Wrangler was also a poorly made movie, although it stared some notables such as Francis X. Bushman and Clyde Cook, the later of whom was the director and actor in What’s the World Coming To? of 1926.

The author of  gay film guide Screened Out, Richard Barrios tells us that no print of this film now exists. But the story is a rather familiar one, repeating elements of Harry Schenck, Edward Warren, and Alice Guy Blaché’s Algie the Miner (1912), Buster Keaton and John G. Blystone’s Our Hospitility (1923), and Fred Niblo’s film of the very same year, Way Out West (1930).

In all these films either an effeminate male or, in Keaton’s case, a “city slicker” is forced to come to terms with a more rough and rugged world than to that to which he is accustomed. In the The Dude Wrangler’s case, the hero Wally McCann (Tom Keene) is described outrightly as a homosexual, one of the film’s fliers announcing the work as being “The Story of a ‘Pansy’ Cowboy—Oh Dear!” 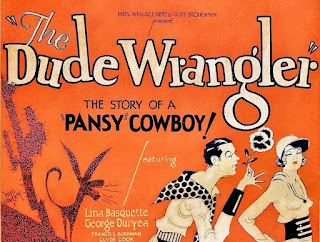 One photograph from the movie depicts Helen dressed in a manly suite with a cigar in her hand while Wally sits nearby on a couch holding a skunk on his lap.

To put it more subtly, the tale involves Wally, an effeminate young man who spends his time creating embroidery patterns for his Aunt Mary (Margaret Seddon). Helen Dale (Lina Basquette), who breeds ponies for polo games. She becomes infatuated with Wally, but is furious with his inability to stand up for himself and be a man. In an attempt to please Helen, Wally buys land in Wyoming, near Helen’s farm, intending to become a good farmer. When he finally buys the ranch, he celebrates by throwing a party. But another neighbor Canby (Francis X. Bushman) who also is love with Helen, plots with Wong (Sôjin Kamiyama) to arrange for a stampede of the cattle herd,  from which he intends to save Helen and win the girl.  But having heard of Canby’s plans, Wally fights it out with Canby, winning the battle and Helen’s love. 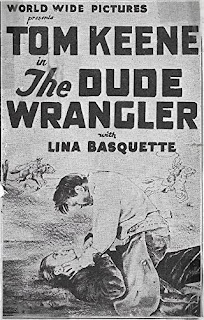 Since I was unable to see the film, I don’t know how comedically these scenes were portrayed. But from the posters they look as if Wally had taken some wrestling lessons. Or perhaps he just enjoyed “wrangling the dude.” This is a lost film I truly wish I might have been able to have watched, despite its low production values.