Beginning in 1942, Robert Henry Mizer began to make photographs and films of musical male models, describing his work as representing body building and matters relating to the male physique. And by 1945 he had established his renowned Athletic Model Guild (AMG), that paid hundreds of young male amateurs, many of them over the years becoming movie stars or other celebrities, which he feature in his magazine Physique Pictorial. Over the years he made more that 3,000 short and feature films posing as works about muscular development but in fact quite clearly developing the US version, in a highly restricted era, of male gay porno pictures and films. 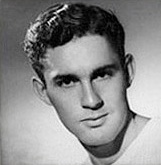 In order to escape censorship—although he was targeted several times by governmental officials and imprisoned on at least two occasions—his models of the 1950s and 1960s wore small posing straps which hid their genitals while revealing everything else including their buttocks which were on heavy display throughout his works. Models spent a great deal of type posing as body builders, and in most of his early works the models were able to make physical contact through wrestling and other forms of athletic like combat.

Soon a substantial number of other photographs had begun creating such “beefcake” like photographs and movies, among them Alonzo Hanagan (Lon of New York), Bruce Bellas (Bruce of Los Angeles), Douglas Juleff (Douglas of Detroit), Don Whitman of the Western Photograph Guild in Denver, Russ Warner in Oakland and Dave Martin in San Francisco.

For a hungry homosexual audience who could not easily get hold of the far more revealing male and boy pornography of Europe, Mizer and these other photographs (to whom Mizer often loaned out models) offered a kind of sanitized version of male images which, given the dearth of more revelatory material, helped to satisfy the sexual urges of thousands of gay and bisexual men during these decades. Only in the 1970s were Mizer and others able to show full male nudity, but even then he limited their sexual activity to kissing, wrestling, cuddling, and rubbing, generally refusing to permit his models to enter into full sexual acts. In a sense, it was a bit like burlesque, giving his audiences a big glimpse of what they desired without providing then with the actual sexual engagement, and some argue, it was all the more arousing for that very reason.

From my viewpoint, there is little visual artistry—even in his early complex “epic” works such as his Aztec Sacrifice and Boy Slaves for Sale, the mini-spectaculars of the 1950s—and even less “acting” talent displayed by his early silent posers in their straps. The narrative was minimal, usually involving an encounter with two popular gay “types,” a greaser and a cop, college boys and Tijuana bandit, fraternity boys and their pledges, cowboys and Indians, sailor boys and Marine Corps recruiters, yard workers and their employers, etc. The plots consisted of the two “types” meeting up, unwillingly or willingly stripping one another, and fighting or wrestling for dominance, sometimes moving off together into the sunset. The standard hierarchal figure of the day would usually “win” over the rebels. The actions are carried out in a near symbolic, what I shall describe, as “American porn-Kabuki” manner. Although violence is the central mode of behavior, it is never truly expressed but simply indicated by gestures and bodily leaps and maneuvers. The guns and knives used to prod the “other(s)” in action might as well have been sticks, and some cases actually were.

Consequently, it would be utterly meaningless and unworthy of the vast effort to attempt to write about all or even many of his films. I have, accordingly, chosen a few examples, mostly works well known at the time, that represent his standard tropes.

The one considered here, the first of the selected works with will ultimately include films previous to this one and after, is his 1957, 10 minute short, 42nd Street Hood. 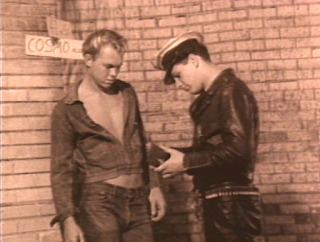 In this work Doug Scott as a greaser “hood” stands near an alley on 42nd Street, grabbing any cute boy that passes by to rough up and rob. After we watch him rob one such victim we see a policemen (Rick Spencer) dressed entirely in leather walks up to him and demand his identification. A pat-down ends in the discovery of four billfolds, which obviously requires a thorough strip-down. 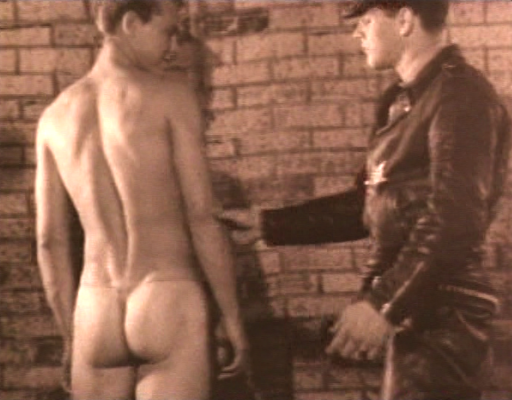 The hood is slow getting his boots off so the cop pulls them off tripping the boy up and sending him to the sidewalk. But soon he’s got him stripped down to his posing strap (it’s odd that none of these boys seems to have ever encountered a jockstrap).

But the minute the cop turns his attention to the boy’s jeans, the hood grabs his gun and points it at the cop, demanding that he now strip as well, a request to which cop, seemingly casually and almost joyfully, obliges. But once more, impatience wins out as the hood grabs the pants off the cop, sending him also to ground. 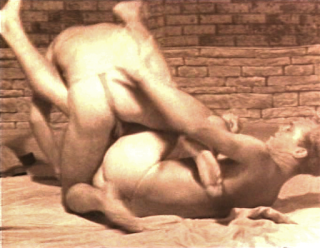 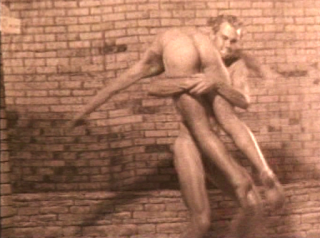 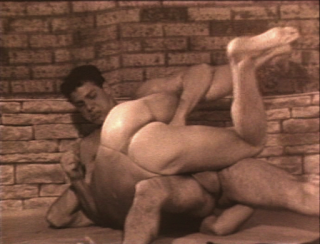 Before long the two are wrestling or, as we might better describe it, choreographing movements which reveal their muscles and butts, almost always ending up with one lifting the other high into the air as if in a sexual act, before returning to the ground to maneuver their bodies into positions for which the camera might want to get a close up.

Eventually good (the cop) ends up winning out over evil (the hood), and all ends well, as the two walk off apparently to the police station, still undressed. We have only to imagine what might happen at the station and within the jail.