Bob Mizer’s mini-epic Aztec Sacrifice released in 1959 mocks the 1950s and 1960s religious spectacles such as The Ten Commandments (1956), Ben Hur of the same year, and Spartacus (1960), paving the way for such later underground camp versions of DeMille and other such directors’ works in Jack Smith’s Flaming Creatures (1963) and Ron Rice’s Chumlum (1964). 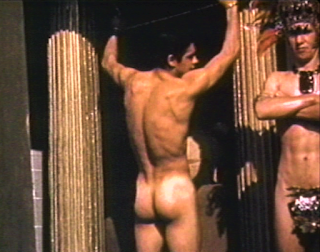 In this costumed and color-film movie, Everett Lee Jackson is an archeological student who goes to bed one night after reading his pictorial text book to have a terrifying nightmare where he finds himself suddenly chained, Hercules style, between two pillars by Aztec chieftains who ritualistically provide him with a presumably sedative drink before laying him down and strapping him into place—in a brilliantly absurd moment—with Mylar tape before placing a “poisonous viper” on his chest, its tongue flicking out onto his face. He is surely about die, but suddenly awakens in his own bed, his roommate returning home to find him sprawled out on the bed with their pet snake Jimmy having escaped. 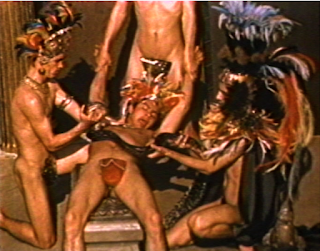 Despite some seconds of pretend horror, it’s all done with a good sense of humor, particularly since we see Jackson smiling, almost with plea-sure, as Physique magazine regulars Jimmy Wilson and George Savage lay him out for the sacrifice. The campy costumes of feathers, beads, and baubles, extravagantly point out the groins of the Aztec chieftains who are understandably attracted to their victim’s pectorals and buttocks.

I would, of course, like to have known more about the relationship between the archeological student and his friend.