Slave Market of 1960 (also known as “Boy Slaves for Sale”) stars one of Mizer’s most beautiful models, Ray Fowle, who plays a Bagdad slave up for sale, his first appearance in Mizer’s photographs and films. 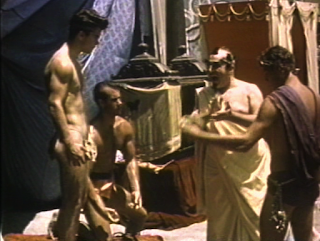 A lascivious old man bids for him, as also does a handsome prince (Don McConnell). Like the previous Aztec Sacrifice the work was filmed in an epic-manner in color. But this time around the plot is slightly more complex and the acting, at moments, far more sophisticated, particularly when the prince attempts to outbid the old man, and eventually loses to him, having emptied his money bag in the attempt to buy the young boy for sale.

The old man starts to lead off his prize, but before he leaves, the young slave bends down to the prince telling him not to worry, that we will take care of the old man by tricking him.

Hardly to they get out of the slave market but the new purchase begins to show signs of what appears to be epilepsy, shaking, and nodding his head to one side. The old man turns back to observe him in anger, trying to lead him away. But suddenly the slave falls to the ground, white froth foaming out of his mouth. 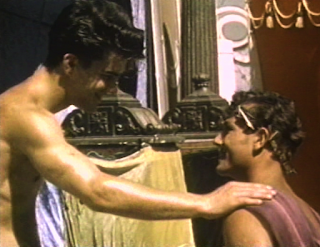 The purchaser takes out his recent agreement, turns the boy around, and immediately returns him to the slave driver, demanding he get his money back in return for the failed “product,” but evidently the seller does accept the return of his “merchandise.” Turning to the prince, the scoundrel asks if he might still be willing to pay the amount he originally bid for the boy. Pretending to be somewhat skeptical and observing the slave still showing signs of epilepsy, he pauses before finally agreeing to buy to slave from the elder.

As the boy moves off with the prince, he still shows some signs of ill health, but the moment they are out of sight, the two hug, the slave assuring his beautiful prince that all is now well. The two hold hands and walk off into the sunset of a thousand and one nights.

Posted by greenintegerblog at 10:31 AM