Animators Shamus Culhane and Al Eugster, in particular, were pernicious in their apparently near-homophobic attitudes toward effeminate males figures and gay men in general. Not only were their part of a larger team of Ub Iwerks cartoonists that worked on the Flip the Frog sequence Soda Squirt which I describe above, but in 1935 inked the nursey rhyme-inspired animated short Mary’s Little Lamb which satirized not only the idea of a lamb—the true hero of this cartoon skit—for following Mary, clearly a rule-abiding teacher’s pet (she plays the piano for a couple of the last day of school performances, including the teacher’s strange gyrations) but for desiring to go to school, where the poor students serve merely as bobble-heads to the teacher’s empty-headed antics. It is only the lamb (voiced by Jack Mercer) that shows any humility and embarrassment for the perverse classroom antics—he blushes twice—and Mary’s little lamb not only gives the best of the musical/dancing performances but ultimately gets the better of the straw-headed authoritarian by transferring all the coal-dust it has acquired in hiding in the school’s coal stove onto the teacher and, in what surely might be interpreted as a racist ending, turning the schoolteacher black, one of many cartoon comedies’ depictions of blackface performers. 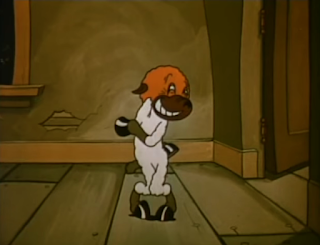 Just as obscene, moreover, is their capricious introduction into the school performances of another of the schoolteacher’s student “pets,” Little Percy, who saunters out like a swish and proceeds for 37 seconds, an eternity in cartoon time, to wave and flutter his hands about in the air, to curtsey and bow and generally turn his effeminate manners into a dance so engaging that even the cows, peeking in through the windows, swish up a short dance and the students at his meaningless performance’s end, all dip and dive in imitation of his pansy manners. 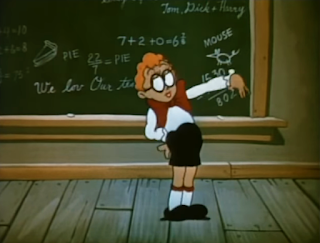 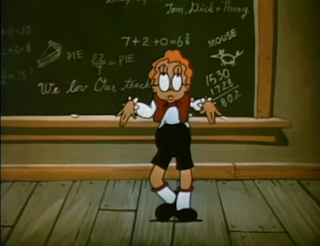 This is an incredibly strange put down of an effeminate young boy given the fact that it means the animators had to spend long hours in drawing hundreds of images simply to bring him to life in a scene that even if one thought mocking youthful effeminacy were absolutely hilarious isn’t actually very funny after the first few seconds. If you can ignore its mean intentions, Percy’s hand dance is rather rhythmically charming, a bit like a conductor becoming the focus of the score he is leading which others to perform, in this case the cows and the final mockery of his fellow students.

It almost appears, given their work here and in the earlier Flip the Frog film, that these two animators are obsessed by effeminate males and homosexuality in general. One wonders why both of these married men—Eugster married to his wife “Chick” (Hazel) for 61 years, and Culhane married 4 times, having two sons with his third wife, Maxine Marx (daughter of Chico)—were so utterly fixated on “sissies.”

Soon after this work Culhane, who also went by the first name of Jimmy, served as the lead animator for the Walt Disney production of the animated classic Snow White and the Seven Dwarves (1937), which became a seminal work for the gay British codebreaker and computer creator Alan Turing, who near his death told friends that he always imagined himself as Snow White, falling into the sleep called death to someday be awakened by Prince Charming, which now we might imagine as disguised in the mask of the not-so-always-charming computer industry which he imagined and longed for. Even later, working for the Walter Lantz company, Culhane helmed the group that created the ground-breaking Woody Woodpecker cartoon The Barber of Seville (1944). Eugster also worked on Snow White and was one of the creators of one of my favorite cartoon figures, Felix the Cat. It is simply inexplicable, accordingly, that these two brilliant creators so utterly enraged by the gay sissy stereotype that they would devote so many sketches to their creation and mockery.

As Harvey Fierstein commented in the film The Celluloid Closet, he actually likes these sissy portrayals, suggesting that it’s better to portray gays in some form than in none. And we all know that it was the drag queens and transsexual figures who were at the center of the 1969 Stonewall Riots which helped to transform LGBTQ politics providing a new openness and sexual acceptance. 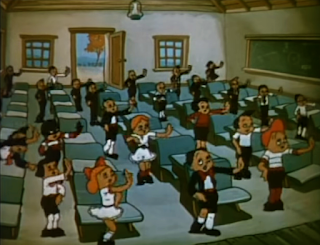 An elderly figure interviewed in Albert J. Bressan’s important film of 1977, Gay USA commented on cross-dressers and the effeminate gay figures of his day on the anniversary of the first Stonewall march: “There were always those among us who stood out as being what people describe as outrageously gay. We’d always say “So and so was not for ‘streetwear.’ You couldn’t be seen walking with them down the street. They’ve always been there and,” he admits, “gave us cover. We could stand on the side and say that’s what a gay person looks like. But today we can join them, march with them, and hold hands.”

Ironically, the applause his fellow students grant Percy at the end of his fluttering hand dance may be truly deserved if not genuine in the minds of the creators of this cartoon. Imitation is, just perhaps, one of the highest of compliments from this perspective, and the entire classroom’s imitation of Little Percy is just maybe the answer to the bigotry with which the same cartoon may have been created.

Posted by greenintegerblog at 9:44 AM