the arrow strikes its sender

Critic Tom Waugh describes Toronto filmmaker Wrik Mead’s over twenty animated miniature narratives as “perverted pixilations,” based on a process he uses to make real actors appear as animated figures moving in an artificial manner that suggests they might be robots or slightly out of sync representations rather than realist figures in a naturalist narrative.

And indeed the central figure of his 1998, 3-minute work Cupid, for example, does appear, in the older definition of that word, to be slightly confused and out of place. 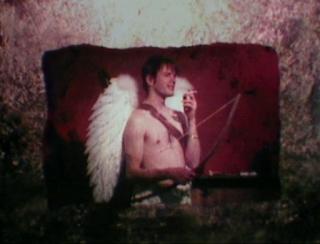 The beautiful young boy flanked by feathery white wings is obviously in a bar, drinking along with the other customers. He moves in choppy, short motions, picking up and putting down his stein of beer and he looks around the room for victims. We see a young woman quickly pass in the foreground and, quite explicably, he pulls one of his arrows out of quiver and shoots it into the air. We do not see where it lands or even if it has hit its target, we only vaguely hear the thud of its hit, presumably into flesh.

Another person passes, and again Cupid shoots an arrow he has pulled from his quiver. And once more we have no way of knowing whether it has resulted in any love-making event. But then love in a bar, and this appears to be a gay or, at least, a sex bar, is always such an “iffy” thing. Even when the heart leaps with joy at the visage of another, the sensation of love is not always, in fact may seldom be returned.

After a few more sips of a beer and the passing of a rather large man whom our Cupid also determines is worthy of one of his arrows, he shoots once again. Only this time, apparently, the victim is having nothing to do with the affair. He pulls it from his body, and lobs it back at its sender, the arrow striking just above Cupid’s heart. 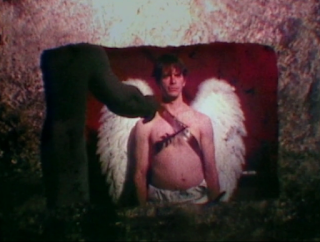 A few drops of blood appear and drip down his chest. Cupid’s eyes grow bleary, a sweet smile appearing his face. Yes, he has obviously been smitten—but with whom? 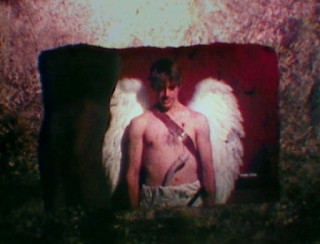 Slowly from his crotch a large appendage appears jutting up from his pants. What appears to be a very large erection, however, does stop there, but grows and grows, twining itself like an anaconda snake around his mid-riff, appearing to constrict him so intensely that he falls out of sight, apparently knocked down by a kind of narcissistic love or simply by an arousal so exceptional—he has, after all, presumably never before been struck down by love—that he is immobilized, a victim of his own medicine.

And suddenly we realize something we might never before have thought about. The beautiful boy Cupid has never been allowed to be struck down by love, but now perhaps, having had it withheld for so very many centuries, may be destroyed by its embrace: his own now impossibly long tube of endless desires linking him to those in love from the very beginning of time.  Like Narcissus, pretty boy Cupid, is struck down finally by his own pent up desires for sexual release.

And finally, we must ask, does this represent the end of traditional love?

Posted by greenintegerblog at 4:16 AM