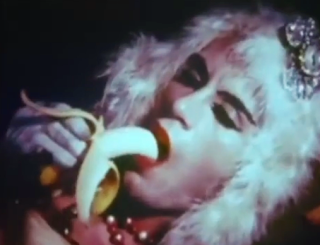 Both parts #1 and #2 consist of her slowly peeling and eating a banana, playing with the fruit’s reference to the male penis. In #1, dressed in a white wig that looks something like the hair of an Afghan dog, with a large circular rhinestone brooch attached her locks, wearing white gloves, beads, and bright red lipstick, Maria, after peeling the banana, slowly puts it to her lips, licks it, places it on her tongue, and bites down hard suggesting both the process of a blow job and the fact that she not only “eats” her men but in her powerful allure and control over them, devours them as well.

Every time she puts a new bite to her lips, she pauses as if to suck its essence before it passes through the engine-red tunnel, biting off another bit, eyelashes fluttering with delight. 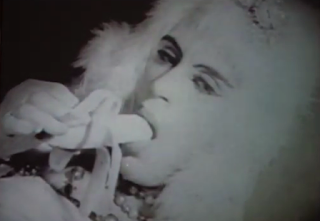 These short films put her front and center of the drag queen camp performances of the 1960s that critic Susan Sontag made famous with her essay of the same year, 1964, in which Montez performed in these videos as well as Ron Rice’s Chumlum, and Warhol’s  Mario Montez Dances and Harlot, as well as working on Jack Smith’s Normal Love—clearly one of the most prolific periods of her career.