Except for it’s special 1249 feet of 2-strip Technicolor footage for the big song and dance numbers by composer Milton Ager and lyricist Jack Yellen—footage that is now lost being only summarized in the black and white segments of the film still available—Chasing Rainbows of 1930 had nothing special to offer its audiences. Headed by the mild-mannered and, as his cast members describe him, kind and respectful Jack Benny as the stage manager Eddie Rock, the characters of this traveling musical are basically a mean bunch of cynics, with a few notable exceptions. 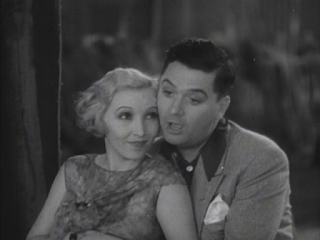 The poor tenor lead, Terry Fay (Charles King) keeps falling in love with the wrong women who lead him on and abuse him (he evidently has a rich father who controls New York theaters) before they leave, each time the romantic fool going into to a deep funk and threatening suicide. Early on in the film the wonderful Marie Dressler figure Bonnie comments “It’s his sixth threat of suicide this year!” His so-called “partner,” the loyal and indomitable Carlie Seymour (Bessie Love) with whom he first joined up to create an act which has brought them into theater, is called in to talk him out of his depression and get him on stage for the next matinee despite his suicidal threats.

Carlie succeeds because, as she puts it, she completely knows him, and unbeknownst to this blockhead, deeply loves him despite being forced to watch all the other women go in and out of his life. Despite the warnings of Bonnie and other cast members, she basically cleans up his room, dresses him, and wipes up his messes without so much of as flicker of sincere appreciation. It’s hard to like such a narcissitic clunk, and if, in the end, if we do give him some leeway it’s only because Carlie cares so much.

But that’s just the trouble with this fairly whiny musical in which Fay keeps repeating his errors and following up with complaints, Bonnie constantly battles with the ridiculously clutzy promp woman Polly (Polly Moran), and the sleazy Don Cordova (Eddie Phillips) stands in the background ready to join up with the insincere women who pretend to fall in love with Fay. As Eddie summarizes the situation as the company is about the break up at the end of their tour:

Just think of it, 42 weeks together and only one fight. It started

the opening night and it’s still on. You know this company should

never have had really had a stage manager. What they really needed 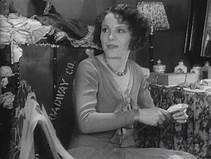 Given the truth of his comments, it’s hard to like this hard-hearted Depression film, particularly when, after the former leading lady leaves Fay and the company, they hire on the gold-digging Daphne Wayne (Nita Martan) whose major talent seems to be insincerely batting her eyelashes at Fay and singing as if she were trying out for the role of Betty Boop. At one point when Fay, after momentarily paying attention to Carlie and actually inviting her out for dinner soon after announces he just married Daphne, the devastated girl, always trying to take the punches as they come, begins to laugh with a sense of false hilarity that goes on so interminably long that we desperately wish someone like Dressler, who is the witness, would give her a good punch so that she might break out in the sobs she’s holding inside. At times like these, we truly wish the plot called for her to go home with Benny to his beloved mother and binge on the canned preserves he keeps gushing over.

When a film scholar mentions this film in connection with LGBTQ moments such as Richard Barrios briefly does, it’s generally concerning the existence of Benny’s assistant Lester, performed by the great pansy actor George K. Authur—the burbling, snippy, “sissified and funny” Madame Irene of the 1926 musical—who here speaks his few lines as close to straight as was possible given his effiminate voice. In fact, one might not even notice him in this role were it not for the fact that after Benny has lectured “the quarrelling pair”—to steal the title of a miniature puppet play by writer Jane Bowles—about their unnecessary argumentation, Lester finds Bonnie and Polly both nearly passed out drunk hidden behind a standing rack of costumes, reporting it to his boss in near hysteria. 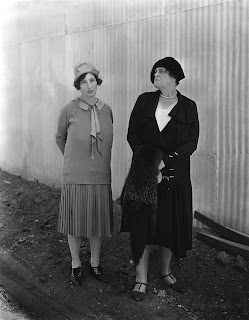 We soon discover, mid-play, that the two women have spent most of their lives together, Polly having even worked hard for a year, as Bonnie fondly reminds her, to pay for the elder’s surgery years earlier. And we are forced quickly to conclude that these two women who previous to this have done nothing but insulted one another, are in actuality not only long-time friends but a lesbian couple, the reason perhaps for their constant arguing now made quite evident. Nothing more is particularly made of this discovery. Dresler merely attempts to administer a bromide to her completely drunken companion without being able to successfully open the bottle top. Declaring, “In five minutes, I'll have you as sober as I am,” Dressler nearly crashes to the floor before accidentally ripping the sink out of the wall in her attempt to snap off the cap of the precious liquid that might restore her friend to sobriety. It’s never explained how she’s able to perform her final number on stage, which we’re told by the film restoration’s credits was “My Dynamic Personality.”

Apparently after Eddie announces to the audience that “Since the leading lady has broken her leg, we had to shoot her,” Carlie goes on in Daphne’s place, making a hit of the third act and finally getting her man to see her as the one he truly loves, the cast merrily intoning the musical’s major number, “Happy Days Are Here Again.” After his divorce, I presume, Terry and Carlie will live relatively happy forever. If nothing else, we’re happy that we’ve made it through this basically joyless movie to its end.

Posted by greenintegerblog at 10:06 AM