the detective arrives on the case

Curtis Harrington arrives at the gate of the white stucco complex wherein he will proceed with his search dressed, in a raincoat and oversized classes, as a kind of comical undercover detective, his shadow projected ahead of his body, a presence foretelling of almost terrifying secrets he may soon uncover. 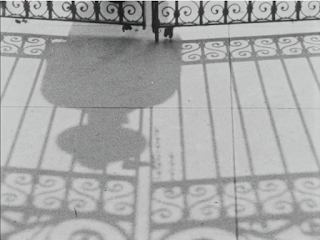 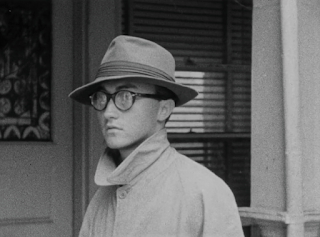 So begins the director’s short 14-minute Fragment of Seeking from 1946, as a somewhat comic work but one we also immediately recognize is based on a serious analysis of what our figure detects “on the scene” that might help him find what he’s seeking.

What he quickly perceives is a blonde woman who appears forebodingly in various places around the buildings, sometimes on the roof, at other times in windows, later in halls, garden pathways, on the stairs, almost seeming to stalk our “detective” while at the same time, as in noir films, attempting to attract him and lure him into her arms.

Our somewhat standoffish “hero” seems at times to be interested, even following her again and again—although we don’t know if he’s actually seeking her company or attempting to discover  where she might lead him, or, perhaps, even attempting to find out why she is so suddenly and erratically moving about the space. But as in almost noirs, our young man seems to be fascinated by her, even perhaps sexually drawn to her. 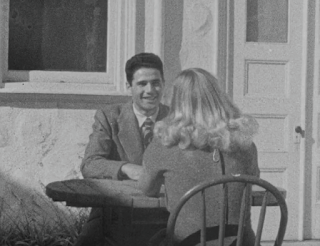 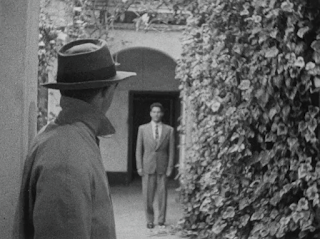 Yet the camera, giving us a clue of the detective’s true focus, seems far more interested in a handsome young man on the outside terrace having lunch with another blonde woman who we see only from the back. Time and again the director’s camera focuses in on the good-looking stranger as if the detective were attending equally or even more to him. And at one point when the woman meets up with the  detective, he perhaps ready to reach out and touch her face, the sudden appearance of the young man walking toward him forces him to quickly pull back from the blonde and move off in the direction the male stranger has taken.

When finally, soon after, the detective decides to explore the building’s inner stairways and halls, eventually entering one room, removing his coat and glasses to reveal himself as a rather handsome, curly haired youth, we wonder whether or not he awaiting an encounter with the male or the female. 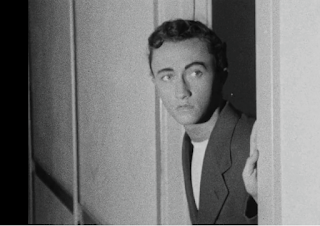 The female knocks on his door, but does not enter, and when the young director, now freed of his detective disguise, opens it, he discovers she has walked off, necessitating a further chase after her down long hallways as she moves ever further away from him. Does he truly want to reach her or is only intrigues about her interest him and constant presence? 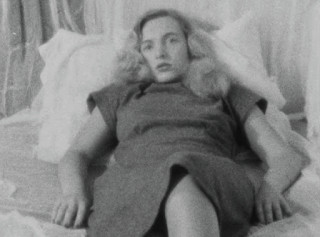 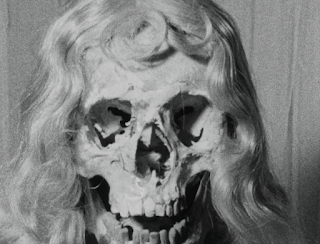 When the two, female and our hero, finally do meet up face to face, he finally leans in to kiss her again only to discover she has become a horrific skeleton which reminds one, seeing this film today, as critic Chuck Stephens has noted, of a vision out of Alfred Hitchcock’s Psycho “foretold.”

Racing away from the scene, he returns to the terrace—en route observing other such skeletons standing and sitting where she has previously appeared—he discovers the man with head having fallen upon the table, apparently dead. 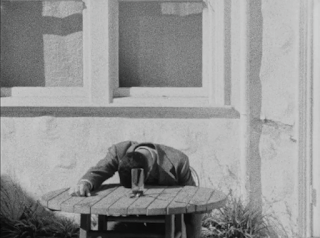 His search now becomes an attempt to discover who has done the deed and why? Cartoon-like footsteps point in the direction of a doorway through which he has previously never entered. He opens the double doors, his shadow again proceeding his gaze into the room where he sees what appears to be a woman, dressed as a man, who when she turns to look at him we perceive is himself in a long blonde wig. The end. 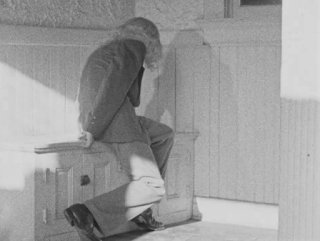 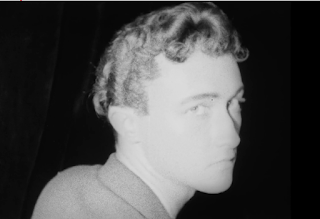 What we have just witnessed, obviously, is a search for something he was previously simply not sure of: his own sexuality. And what he has discovered is, just as apparently, dependent upon how the film’s witnesses interpret what they have observed. But I think we can say, generally, that any relationship he might have sought out with women has failed horribly. Either in reality, or in his own way of seeing, the woman—serving as a symbol for all women, the ones in various positions about this dream-like space—offer him only images of death and decay. It is clearly the man who intrigues him with his living smile. But his own reticence to explore any communication or love with the boy—and all the others whom he represents—has destroyed any opportunity for love to survive, the search for himself having killed it off by his own confusion, his own sexual unsureness and inability to present himself as he truly is. As Stephens summarizes it: “death is a wig.”

This work, created just previous to Harrington’s friend Kenneth Anger’s far more confident celebration of male/male relationships in Fireworks (1947), was perhaps the first gay “coming out film” ever made. In its dreamlike elements, its rather negative analysis of the situation, and the central figure’s confusion of sexual identity and desire, Harrington’s work definitely belongs to the pattern of that genre which I describe throughout these essays as the “CO-1” variation which we also see played out in several of Harrington’s later works and in movies by Anger, Gregory J. Markopoulos, James Broughton, Willard Maas, John Schmitz, François Reichenbach, Ron Rice, A. J. Rose, and Jacques Demy, among others. And as such. it stands as one of the most important early works of LGBTQ cinema. Here we see, finally, the gay detective, only 20 years of age, arriving to seek out clues to a case which no one ever before had openly announced as an issue even needing to be solved.