David Kartch | Zen and the Art of Landscaping

David Kartch (screenwriter and director) Zen and the Art of Landscaping / 2000, 2001 general release

David Kartch’s film Zen and the Art of Landscaping won several festival awards in 2000 and 2001 before its general release in 2001. It is, in fact, a truly well directed satire of the numerous daytime soap operas of the 1950s and 1960s which calls up, in a somewhat more contemporary context, the life of US suburbia that restates some of the impossible coincidences of soap opera plots, although in this case just making them plausible enough that Kartch’s film successfully skewers small town conventions and class distinctions simultaneously. 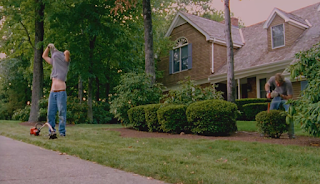 The gardener Greg Daniels (Greg Haberny) has arrived at the lovely suburban home of Jean and Richard (Kathleen Garrett and Mark Blum), mowed the lawn, trimmed the hedges, and raked up the trimmings and grass into a garbage can, while stripping off his shirt in the hot sun, before Jean arrives home from shopping. Strangely, as she is ready to remove her grocery bag from the back of her station wagon, she begins pounding down the sack as if to destroy all its contents. After observing her doing this for some time, Greg calls out, “Are you all right?” She pretends to ignore him, but soon moves over to apologize, suggesting she just realized that she has missed out in on a big sale at the Stopper Shop.

She introduces herself—her husband makes all the arrangements with the lawn services—and he introduces himself as Greg, suggesting that all of his friends call him Zen, and before he knows it she’s invited him for something to drink. We all know what’s in store of course—unless you’ve never seen a comedy of the suburban wealthy like The Graduate before. He hardly gets the chance to recognize that there’s more than a little vodka in the orange juice she serves him and to observe from a refrigerator-posed photo that he thinks he went to high school with her son before she pulls him in for a deep slurpy kiss, despite his unintentional reminder that she’s old enough to be his mother. 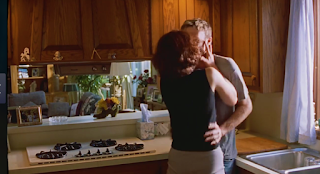 While seducing the lean hunk of flesh, she eyes the clock registering 5:30, obviously close to time when her hubby returns home. We can guess what happened, that she’s caught him cheating on her and is using Zen to get even. Indeed we see a car pull up and park in front of the house. 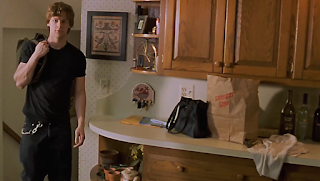 The door opens, and in walks....Andy, her son who’s been away at college. The couple quickly break away and each attempting to readjust his or her clothing. Zen insists he should return to his work, but she insists on introducing the two. The son has seen way to much and won’t believe a word of her explanation that Greg Daniels has come in to fix the sink. Indeed Andy has some other memories of “Zen.” “Remember all those times when I came home from school all bruised and beat up and I just told you I was playing football with the guys?”

“No, I hate football,” Andy screams out. “Mom, this guy was the Grim Reaper of Glendale High. He made my life miserable.”

“And look at you now,” Andy digs in. “How is the lawnmowing business?” For Andy, who clearly is still is really a jerk, he is just a “poor, white trash, mother fucker!”

When Zen observes that Andy’s choice of words is strange given the situation, Jean slaps her brief lover’s face, while at the very same moment, stage left, enters her husband, Richard. Hearing his voice, Jean grabs Greg, pulls him to her and kisses him intensely once again, pretending shock her husband witnessing their action.

When asked why she is kissing the lawnmower, she responds, well, “it’s not just the lawn he’s doing,” Andy responding “Oh, God!”

Wait, it gets worse. It seems Andy has driven all the way home to tell his parents that he’s gay. His father, as have so many other father’s, declares his son is not gay, and his mother immediately insists—after wondering why he couldn’t wait until after dinner—declares it’s just college. “Everybody thinks they’re gay in college,” Zen privately musing “Really?” 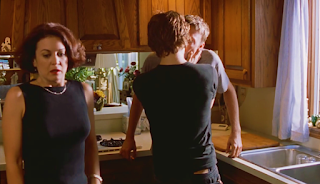 As his parents continue their denial while simultaneously blaming of one another, Andy rushes over the Zen and abuses him just as has his mother: kissing him deeply on the lips.

Startled by the act, Richard asks “You banging my son too?”

“I’m not banging anybody,” answers Zen.

“Except me,” Jean returns, moving it to take over by planting kisses on the “landscaper’s” lips. After Zen pushes her away and accidentally hits Andy in the process, the three get back into a pattern of blaming one another as they obviously have every day they’re lived together.

“You don’t know what it’s like to wake up every day and feel that you’re different,” Andy interrupts.

Another revelation. Which, of course, turns into further revelations, most importantly, that Jean had not wanted to have a child, afraid she might lose her attractive “girlish” figure.

Jean hauls off and hits him in the face with a frying pan, explaining that what she was really afraid of was that if she didn’t remain beautiful her husband might cheat on her, as he has, apparently, with the check out girl at Stopper Shop, Candy Miller—who just happens to be, we immediately discover, Zen’s girlfriend. 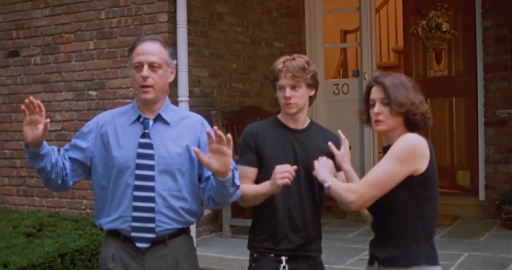 Andy had a big crush on her all his senior year, he gasps, as Jean suddenly registers shock that Zen was going to cheat on his girlfriend. Before he knows it, the family made in hell all turn on the lawnmower-boy, coming after him like ghouls from The Night of the Living Dead, he keeping them away through the use of Weedwhacker as his backs away in his truck and drives off.

Too bad such a clever writer/director did not continue in those roles; he became an editor of several documentaries and a travel TV series, The Coolest Places on Earth.

Posted by greenintegerblog at 2:44 PM