Edmund Goulding | Reaching for the Moon

Edmund Goulding (screenplay, based on a story by Irving Berlin), Edmund Golding (director) Reaching for the Moon / 1930

For the first 25 minutes of Edmund Goulding’s 1930 film Reaching for the Moon its characters spend their time establishing their credentials for possibly becoming figures who have no intention of marriage, in part due to their sexual and lack of sexual interests.

In the same hotel, Vivien Benton (Bebe Daniels) is meeting with her women friends, all apparently aviators gathered in a woman’s only event and casually clustered around one another that suggests, particularly with one girl laying her head on the another’s chest, that they may possibly be lesbians. Evidently they are planning for a big change, a move from New York to England, and Vivien exhorts her girls to prepare for that event in a series of airplane metaphors:  “I want you girls to keep you tanks clean, your landing gear close to the ground, and no tailspins.” 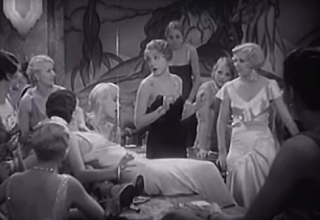 Presumably she’s speaking of their possible relationship to men, but we can’t be certain, and whatever she’s telling them seems to be somewhat lost since some of the women appear to be rather drunk.

Their room is guarded, incidentally, by Sir Horace Patington Chelmsford (Claud Allister) a prissy, monocled mileqetoast who is convinced that he is engaged to be married to Benton despite the fact she hasn’t yet let him know of the date and utterly ignores him. Soon after, he observes to her father James (Walter Walker): “Do you realize that I’ve been secretly engaged to your daughter for months, madly in love with each other and all that sort of thing, and I haven’t been kissed once.” “We’ll soon fix that,” replies Benton Sr., kissing him on the forehead.

In another hotel meeting room, a group of rather pompous men have gathered to celebrate the financial achievements of a young American financial wiz, Larry Day (Douglas Fairbanks) who has not yet arrived at the party, a rather pompous and boring figure attempting to speak about the missing celebrant. Larry arrives, immediately changes his dinner steak order to corn flakes, and energetically paces around the room, like a contemporary deal-maker, making an international telephone call in the middle of the poor flustered man’s speech.

When the two meetings break up almost simultaneously, a party breaks out between the women and the men. Yet Benton seems disinterested even in her supposed boyfriend, Jimmy Carrington (Jack Mulhall) and far more fascinated by Day for whom Jimmy works.

Day meanwhile refuses to join in the party, insisting that he has to go home and get to be for his early days at the office the next morning. The financial wiz seems to be interested only in money, obviously knowing very little about women. Indeed, Jimmy hints at Day’s disinterest in the opposite sex, commenting, “I don’t think there’s a girl in this town that can get him,” to which Denton quips, “Well, of course, there’s always the river.” Presumably referring to “Ole man river,” which she and her audience would immediately know as being the popular song of Jerome Kern’s and Oscar Hammerstein’s Showboat, which had been a Broadway hit a few years previous (1927), or referencing his tossing his body into the river from loneliness—in either case hinting that Day is definitely no “ladies’ man.”

Nonetheless, she bets Jimmy that she will be able to make him fall in love with her immediately.

When Day arrives home to his penthouse, his conversation with his manservant, Roger (Edward Everett Horton) further confuses the sexual situation. Roger, who we first observe looking at a young woman through his binoculars, is a voyeuristic “observer” of love, as he describes himself to his employer, a man who “studies the methods of making love by observation.” Worried about Day’s lack of attention to the other sex, he is afraid that someday soon he’s going to meet someone and will simply go (snapping his fingers) “poof.”

Day laughs, “So you think I’m liable to go poof?”

Roger counters: “Napoleon was a very general and then little Josephine came traipsing into his life and Napoleon went “poof.”

Indeed, the puns go even further when Roger suggests, “Well, there’s a vast difference, Sir, from the art of making money and the art of making a lady.” Even Day comments on Roger’s odd expression of elocution, to “make a lady,” which might suggest not only having sex with a woman but possibly making oneself over into one, another version of “going poof,” or becoming as the word suggests, a homosexual.

When, after a few failed attempts, Benton actually makes contact with Day, he immediately— as the plot requires—falls in love with her and invites her for dinner at his penthouse, which brings about a further comical interchange between Day and his manservant. 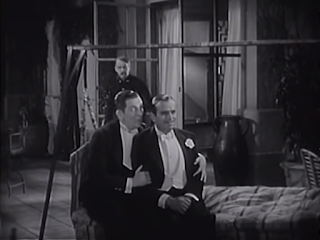 Attempting to teach him how to court the young aviator, Roger sits down on the terrace couch with his employer, places his arms around Day and recites the appropriate words of love: “From the moment we met, I knew this had to happen.” Of course, the electrician he’s order to help make the lighting just right, appears at that very moment, overhearing their conversation, interpreting it for the real thing. When the workman is finally recognized, Roger attempts to show him what needs fixing, “Come with me, my man, and I’ll show you what’s what!” The electrician, presumably like the audience, answers, “I ain’t your man...and I know what’s what!” So ends any truly clever portions of this otherwise rather bleak “musical.”

Benton, to intrigue him further, stands him up, about to board for her overseas voyage.

But Day, decreed by plot to be intrigued, follows on the same ship, playing first a steward who enters her suite, like the electrician in his own penthouse, to fix her “lights,” and later, as a lovesick puppy, begs her for a meeting. Like he was back in New York, she seems to be booked up for the entire voyage. But finally finds a moment for him on the very night before they enter port, for cocktails.

Finally, Roger re-enters the story to stir up some vicious love potion that, at very times, stirs up Sir Horace—remember him?—to challenge his spousal intruder, turns Benton into a kind of absurd money—primarily, it appears, to simply give Fairbanks a chance to show how his athletic talents at jumping and leaping—and makes Benton mean.

After singing a couple of Irving Berlin tunes—one, “Reaching the Moon,” sung by a young Bing Crosby—the two meet up and confess their love, he in front of he entire squadron of women who are hiding out in a life-saving boat.

By this time, however, the movie reveals that the Great Depression—perhaps the very first film to telegraph the news of the day—has wiped him out, convincing him that he now has no way to win the love of the still wealthy Benton. Turns out she’s a real woman after all, ready to cheer him on to the new possibilities of the future, permitting them to marry and leave poor Sir Horace just like that—poof!