invitation to a party

Ester Krumbachová and Jan Němec (screenplay), Jan Němec (director) O slavnosti a hostech (A Report on the Party and Guests) / 1968

Perhaps better translated simply as “The Party and the Guests,” since the word “report” does not really exist in the Czech title, O slavnosti a hostech, Jan Němec’s 1966 film, A Report on the Party and Guests, is an allegorical work with truly Kafkaesque elements, leading the Czech Communist government to ban the work. It was released in 1968 during the brief Czech period of freedom, but was again banned “forever” in 1973. It was released on DVD by Criterion three years ago, and I watched it yesterday in memorium of Němec’s recent death.

On the sly, so to speak, the film asks its viewers “how to believe.” But only one guest attending the titular party, performed by Czech film director Evald Schorm — whose own works had already been banned — actually seems to know the answer to that, thus becoming the only party attendee to leave the affair behind, an act for which is he horribly punished. 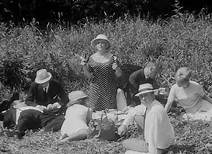 The film begins with a group of seven apparently bourgeois city-dwellers celebrating a day the country, much like the characters in Jean Renoir’s Partie de campagne. After picnicking, they spot a group of what appear to be wedding-goers and whistle for them stop presumably to congratulate them, but these party celebrants just as quickly disappear.

The three women decide to bathe in a nearby stream, but as they return, a group of thuggish-looking young men surrounds the men and women, ordering them to separate by sex. One of the thugs draws a circle in the dirt, insisting that they must remain within it. The group’s head, Rudolf (Jan Klusák) sets up a desk in front of picnickers and interrogates them in the manner of K’s interrogators in The Trial. When one of the picnic-goers breaks their rules by crossing over the designated circle, he is grabbed by the henchmen.

A sudden explosion stops these abuses, as a man, looking a bit like Lenin, appears and scolds Rudolf — his adopted son, so he reports — and the other men for their behavior, explaining that it was all an elaborate joke. Being the father of the bride from the wedding party, he invites everyone to a party nearby, at which he is also celebrating his birthday.

Confused and a little taken aback, the four men and three women follow the “host” (Ivan Vyskočil) and discover in a nearby river cove, beautifully set tables piled high with food and wine; inexplicably even place cards with their names upon them appear beside the plates. Several conversations of little consequence follow: toasts, empty platitudes, etc. And gradually we realize just how empty-headed the picnickers really are, awed so easily by the bounty of the food and party presents. 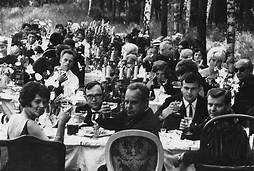 After the meal, the host asks each of the guests whether are happy, and one by one they admit they have been won over, despite the confusing situation — that is, all but one, who has silently departed, fed up with the meaningless gibberish and imposed behavior.

Quickly, the host commands his henchmen to fetch his mastiff and guns, and they move into the woods to track down the missing guest who has refused to be happy with the situation. The  other original picnic-goers quietly remain behind, sipping their wine without seeming to comprehend the consequences of their passivity. 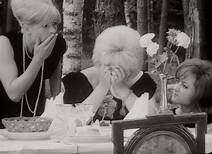 Although Němec himself argued that the work was not a political statement as much as a kind of allegorical fable about the society at large, it is hard not to read A Report on the Party as an actual “report,” as in its English title, on the behavior of the Communist Party or any totalitarian regime wherein original thinking and disagreement are outlawed, and wherein a pretense of happiness is paramount.

Long seen as the “enfant terrible” of Czech cinema, Němec constantly found himself in trouble with Czech government authorities, and was almost arrested for making this film. Almost all of his Czech films were banned, and when he finally moved to Paris, other European cities, and later to the United States, where he lived for 11 years, he found himself unable to work as a filmmaker under the Hollywood studio stipulations. He returned to the Czech Republic when the Communist government fell, but resented his country’s admiration so late in his life, returning metals awarded him by then Czech president Vaclav Havel.

Nemec died on March 18th of 2016 in Prague at the age of 79. If there was ever a profound artist whose work was nearly censored out of existence, it is Jan Němec. A Report on the Party is not only a testament to his genius, but has now again become a highly relevant film.