La revue des revues, directed in 1927 by Joe Francis exists today, I should imagine, only because it features in two short dances, Josephine Baker.

Despite the dozens of performances, along with the hundreds of bolts of cloth, the piles of sequins and spangles, and the bins of feathers needed to bring this film to the screen, to say nothing the lines and lines of chorus girls who spin in and out costume faster than curtains of Paris’ Palais and Folies Bergère can be hefted up and down, this film is otherwise a bore.

To describe a plot would be highly misleading, although the film begins with one before it quickly forgets it, having to throw everything together again in a few moments near the work’s end. Gabrielle Derisau (Hélène Hallier) works as an ironer for the French fashion house of Paquin, but is fired on the first day of the movie for being too interested in a local news item—which the other girls read with equanimity—that announces a contest for the woman who can fit in a small sized shoe, awarding her 10,000 fracs and a job in the chorus at the Palais.

Gabrielle attempts to enter the contest, but like Cinderella is prevented from even trying—not by her evil step-mother in this case, but by the creators of the contest themselves who, taking a long look at her frizzy hair and her working-class outfit, won’t even let her in to try on the magic shoe. 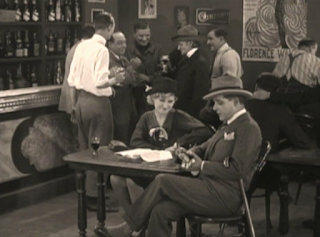 Having just been fired from her job, however, our Cinderella determines to find a bar where the theater folk hang out, and assumes she found it with a group of arguing men discussing something of seeming importance. Actually, she may have just discovered a group of stage managers or back-stage theater underlings, but accidentally shares her table with a lesser known actor, Georges Barsac (André Luguet), who, when she explains her desire to get into theater, offers her a box-office seat for a production in which he is featured. 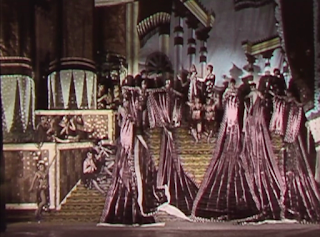 She attends with a borrowed Paquin gown, watching several of the film’s early acts which consist mostly of chorus girls dressed in various exotic and revealing costumes (although not at all as revealing as they actually were in the day) who flutter and flail in lines up and down the steps of each set and move in and out of the wings in lateral motions. Occasionally, the chorus numbers squeeze in noted dancers and characters of the day such as Erna Carise, Jeanne de Balzac, Nikolska (Jelizaveta Nikolská), Stanisława Welska, and acrobatic acts such as the Ludovics. 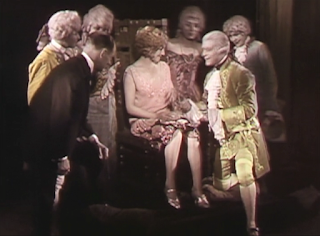 During what was to have been her theatrical premiere, the woman who has won the Cinderella contest, when they attempt to place the shoe on tiny feet, discovers it no longer fits, her foot  obviously having swollen—as well as her head. When the actors ask if any audience member might want to try on the shoe, Gabrielle finally gets a chance, proving that it’s a perfect fit for her foot as well as she being perfect as a theater star.

By chance again, she has been seated in the box to the famous Impresario, Edmond Castel who invites her first to perform at the Palais and later at the Folies, irritating Barsac in his attentions to her, but which  winds up getting him a job at the Folies as well.

At this point the plot is stored backstage with the sets and the endless parade of numbers, nicely tinted in their frames, begins. Most of them are so similar and choreographically indistinguishable that you easily might fall asleep if it weren’t for the two appearances of Baker, whose numbers “Plantation” and the up-dated version of “Tango under the Moon” bring life to the screen and present unforgettable dance performances. 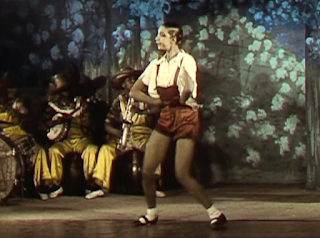 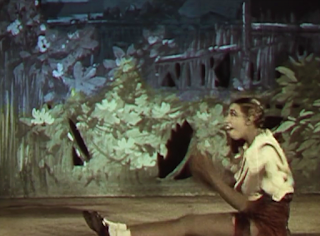 Although truly quite a beautiful woman, Baker’s body seems somehow out of proportion and her movements seemingly awkward, but it is how she uses these very elements to create a breathtaking series of fluid movements, often leaning into the dance as if she were pure locomotion itself, kicking out a leg only to turn and spin after to balance it perfectly with another kick that make it clear she is utterly in control. Her lateral movements, emphasizing her hips and ass, are so smoothly accomplished that they appear, at moments, almost to predate Michael Jackson’s moonwalk. Baker mixes elements of ragtime with tap and the shimmy of Charleston but in her emotive expression takes them into the realm of modern ballet movements, dragging herself across the floor as if in the midst of a dance apache, but with a flick of the eye springing back to her feet.  There’s no way to describe her movements but to combine them in the words “awkward grace.”

To get back to the plot, director Francis has a publicist whisper into Gabrielle—now Gaby Derys’s ear an idea of how to bring her into the public attention. He plans to have her robbed, late that night, of an inexpensive pearl necklace, which when she reports the theft to the police the next day will have been a necklace worth 500,000 francs, making the event and her front page headlines.

Overhearing the plot, Barsac ends up being the robber. But when the news never is reported, Gaby having evidently decided against such a crude publicity skit, he is about to give her back her necklace along with a wedding ring, but finds Castel now making himself at home in her dressing room. Furious with the producer and Gaby is well, he is almost ready to break off his relationship with the rising star, until Castel shows him a letter making it clear that Barsac’s job at the Folies was result of Gaby having put it into her contract that he must be hired.

Apologizing for his behavior, Barsac repeats his love, and the couple ends the film together again and on their way to a wedding ceremony. All we look forward to are the words “The End.”

The numerous performances are made worse by the fact that the score has been terribly redubbed with a contemporary work by Taranta-babu, who pretend to create a dissonant jazz score that goes haywire with the introduction of Russian, Spanish, and even Yiddish musical themes that seem only slightly appropriate to the action. Instead of hearing this group’s weak imitation of jazz with banjo, I might have far preferred the original accompaniment by the Thompson Jazz Orchestra.

But if the film, in general, is forgettable, any opportunity to see Josephine Baker in motion is worth the viewing.

Posted by greenintegerblog at 5:20 PM