Although Stan Laurel and Ollie Hardy have been far more involved in domestic relationships in other films such as That’s My Wife (1929) and Their First Mistake (1932), playing husband and wife in the former and fathers to a newborn child in the latter, and they share the same bed in numerous of their comedies, they have perhaps never been as physically intimate as they are in the film Liberty of 1929, written and directed by Leo McCarey.

The film begins with them escaping from prison, obviously having been jailed for one of their numerous crimes that have brought them to the attention of authorities. With the prison guard chasing them with a shotgun, they run toward a getaway car where a friend throws them their clothes he’s removed from their apartment, as they proceed to disrobe, tossing away their prison garb from the back seat.

They finally elude the chasing guard by standing outside an automobile in their street clothes as the police car speeds past. But just as suddenly they discover that they are wearing one another’s pants, Stan barely able to hold up Ollie’s britches, while it’s a wonder that Ollie has even been able to fit into Stan’s breeches. For the next 8 ½ minutes they attempt to change pants in alleyways, behind a basement storage lift, in the back seat of a waiting taxi, at the back door of a fish shop—when a crab sneaks into Stan’s trousers and continues to nip him in the butt from time to time, sending him into an involuntary leap of motion—and finally in a construction elevator site. At each location they are interrupted by window-viewing neighbors (in one case the woman who leans out her window is a young Jean Harlow), shop owners, and various other passersby, including the suspicious policeman who’s on their case. To anyone who catches their act, one might imagine they are a new phenomenon of a duo of flashers. 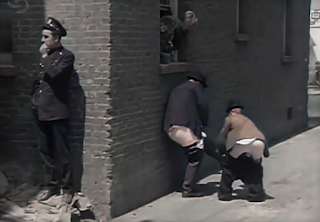 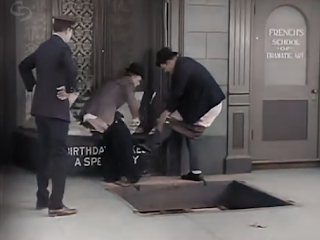 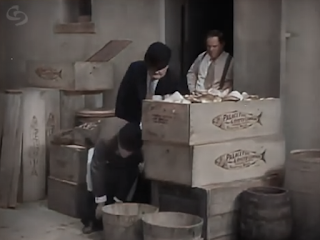 While changing clothes in the elevator they accidentally push the lever which sends the car up to the top floor of the unfinished 20-story building, where for the remainder of the film they attempt to make their way across the narrow girders to a ladder, holding on to each other’s legs, feet, arms, and other body parts and, at times, undressing each other in the process all over again. Now in his own pants again, Ollie is convinced that the crab whose claws grab him are Stan’s hands “nipping” him (“This is no time for nipping”) presumably suggesting that he imagines his friend is pinching his ass? 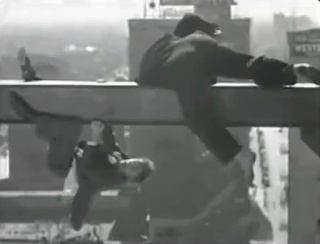 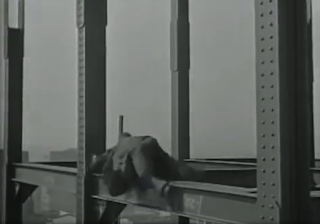 Their acrobatics are astounding, matching almost anything that Harold Lloyd did in his many high-wire building ascents and descents.

But the important thing here that what saves them is simply one another’s bodies, who push, pull, lean-to and away from each other as if performing a highly abstract sexual act. Eddie Cantor briefly performs just such an intimate investigation of another man’s body a year later in his film, Whoopee!, but his and the other gentleman’s activities are performed mostly as bravado, an attempt to show off the various scars of their hospital operations; but here—given that they literally attempt to get into one another’s pants and save one another from falling to their deaths—their bodily maneuvers come as close to male on male sex as possible while pretending it is nothing more than silly physical slapstick. The liberties here taken are definitely just as seriously as those who fought for the cause—as the story suggests with its beginning narrative, Washington, Lincoln, and...even “Black Jack” Pershing (whose military actions led to the death of over 11,000 American soldiers in World War I). Liberty represents physical comedy at its very best.

Posted by greenintegerblog at 12:35 PM