Lloyd Bacon’s Manhattan Parade was originally to be a musical, in which the musical numbers, Harold Arlen’s and Ted Koehler’s “I Love a Parade,” “Temporarily Blue,” and “I’m Happy When You’re Jealous” along with any dance numbers that had been planned were erased. Musicals had suddenly worn out their welcome with early Depression audiences.

The film which at the time of it’s release was noted for its newly improved Technicolor which Variety described as "easy on the eye and never harsh or confusing as the early color pictures were." Yet the version that remains is in black and white, although the University of California Los Angeles film collection does still hold a 16mm safety color print.

And, finally, what was originally to have been a musical comedy turned out to be a rather biting, at times even sour satire on musicals, their producers, the theater in general, and the treatment of working women by their husbands in the marketplace. 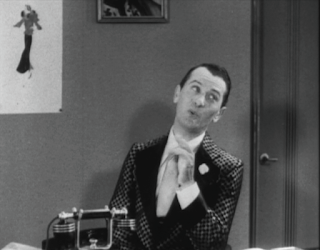 Although it’s fascinating for its odd viewpoint—that of a large costume manufacturing company that provides outfits for many Broadway plays—its characters get lost in the difficulties of the early Depression years and the betrayal of friends and lovers. Even the comic “panze,” the head designer Paisley (Bobby Watson who also played the fashionable dressmaker in the original Broadway musical Irene and the diction coach in Singing in the Rain) from whom you might expect a few clever bon mots appears to be on the constant edge of a nervous breakdown over a director’s demand for cerise brocaded dresses instead of maroon and another lunatic director’s attempt to costume elephants and ostriches.

And in order to save the company which she created with her husband, executive head Doris Roberts (Winnie Lightner) has to put her best customers, the production team of the every-arguing Lou and Jake Delman (the comedy team of Joe Smith and Charles Dale) out of business and threaten to sue her husband (Walter Miller) for alienation of affections through her secretary with whom he ran off to Europe after financially bankrupting the business.

In short, without any music, dance, color, or upbeat humor it’s not a pretty picture. 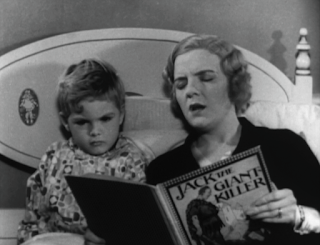 Still, there are a few elements that at least provide the film with some fascinating moments. Working so devotedly and professionally that you truly believe that she might change the course of Depression-era theater, Lightner is engaging and even charming as a female executive that makes her husband seem like a fatuous male  chauvinist, a man who uses even her devotion to her near-perfect son (the famed child actor Dickie Moore) against her, convincing her that falling asleep while reading her son Jack the Giant Killer that she is not spending enough quality time with him and, accordingly, should abandon all the hard work she’s put it making The John Roberts Costume Company a success.

The real reason, of course, is that if he pretends to work long nights in the office, he can spend his time romancing her former secretary, Charlotte Evans (Greta Granstedt). That Doris believes him and heeds his advance suggests she’s not quite as clever as she has seemed to be in the previous scenes when she outwitted a pair of arguing producers who want to cancel their order for dozens of pirate costumes,  calmed down her peevish designer Paisley, and assured her bookworm information specialist that he will not be beaten at 5:00 by the husband of a wife whom he has informed that Lady Godiva wore no costume whatsoever if he leaves the office by 4:30.

Even the brief time when she’s off screen caring for Junior, we so miss her that when he hear her husband’s gone to Europe on a sexual tryst and in order to save the business she must return to the office, we breath a little easier and hope the film can get its wandering plot back on track.

Unfortunately, it’s already too late. Instead of clever repartee Paisley has thrown another cissy-fit, threatening to go home and decorate his own apartment. It’s apparent that writers Houston Branch and Robert Lord, although both noted for their numerous later contributions to film writing, didn’t know how to present a gay character who could do anything but stomp his feet and flap his wrists. Executive Doris Roberts calms him down eventually by offering new drapes for his office. 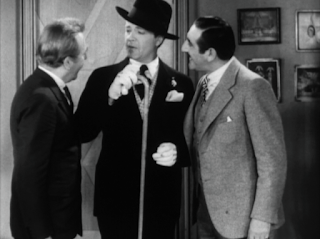 The film, moreover, offers up another effete male, the actor Frank Herman who demands “etchings” in his dressing room and, already being paid $5,000 a month as an actor who evidently is not bringing in his promised audience, wants $2,000 a month more from his confused producers Smith and Dale. If he pretends to dress a bit like a dandy or a 1930s version of Oscar Wilde, his lines reveal nothing whatsoever of Wilde’s wit, and we wish he might sail off on his yacht and remove himself from the screen as soon as possible.

But first we have to sit through Smith and Dale’s abysmal shtick. With their success in vaudeville (Neil Simon modeled his Sunshine Boys duo on Smith and Dale) it might have seemed a good idea to bring the endlessly arguing brothers skit to the silver screen, and the first time round of their interruptive attempts to each claim the credit for anything of momentary success and to deny everything when it fails—which given these former cheese merchants’ lunatic Broadway productions is most of the time—is somewhat amusing; but when they repeat the skit and repeat it yet again without so much as a single funny line behind it we begin to dread listening in to their long discussions of Broadway’s Depression woes, even if they are willing to lay down in the street with their overpaid actor if he’ll only give them a break. 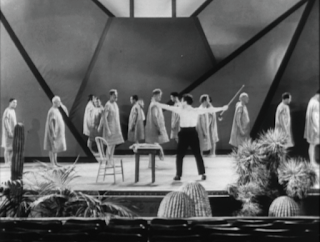 At least when a true loon, the arrogant self-created Russian-born direct Vassily Vassiloff (Luis Alberni) shows up at their door determined to create a revolutionary new high-brow play, things seem to momentarily perk up, particularly when we see the prologue of his imaginary play, which consists of several men of varying heights dressed in sack cloth beating their chests as they make their way across the footlights and into the orchestra pit. Before the Delman’s have even paid off the $18,000 their new director has expended just for costumes, Vassiloff demands the audience seats be removed so that he can fill the theater with water as if it were suddenly the Hippodrome before he just as suddenly decides to replace it with desert sand. The elephants go, and ostriches replace them, and finally the ostriches are also out. A theater wall is torn down despite the Shubert's’ threats to sue, and eventually the mad director decides that his cast will wear no costumes whatsoever and requests the theater lights also be disassembled.

If his purchases save Doris’ costume company, Vassiloff’s play bankrupts the Delman’s who end up back in the cheese business with no Depression customers even interested in what originally made them rich.

And before we might even be able to crack a smile about the film’s satire of serious drama, Doris’ husband returns to try to take over the revived business once more from his now justifiably fed-up wife. As I suggested above she manages to involve her husband’s mistress in a scheme which puts her boring husband out of the picture, but having been responsible for the Delman brothers’ failure we wonder who will buy her costumes of the future and why anyone might want to do business with a woman who kills off the source of her own income. By film’s end Broadway looks as dark as if the Covid virus has shut it down. We don’t even find out if Doris makes it back home to Junior. And by film’s end, there’s nothing left to do but to throw the former director out the window.

Fortunately, the real director of this horror, Lloyd Bacon, went on to direct several hits when movie musicals almost immediately came back into style again, including 42nd Street, Footlight Parade, and Wonder Bar.

Posted by greenintegerblog at 6:53 AM