Marc Heustis’s seven minute film Miracle on Sunset Boulevard advertises itself as a sped-up version of Sunset Boulevard, but in fact has almost nothing to do with Billy Wilder’s film except that it features an aging actress shopping in Beverly Hills on Wilshire Blvd. where unexpectedly she is greeted by a fan wanting her autograph. So horrified is she in being reminded of her long ago career that she lets the wind whip the piece of paper which she attempting to sign out of her hand as she goes on the run. 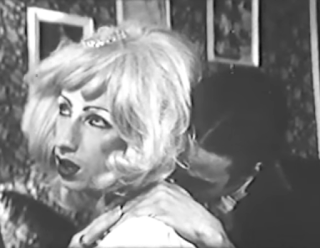 Late at night, a bit like Norma Desmond, she watches her old movies, but once again grows terrified by the process of re-living passionate love scenes from decades earlier and cries out several times (silently of course) “STOP!”

Utterly devastated to be so continually reminded of her age, she is suddenly visited by the vision of a lovely woman who, a bit like a cartoon vision of a figure just escaped from a Maxfield Parrish painting shows up and evidently serves as a sort of mother-confident, campily reintroducing our troubled movie star to the four elements of earth, air, wind, and fire. And suddenly she materializes a young female child which the actress takes into her arms. Either the mysterious seer is pimping as a provider to agèd pedophiles or reintroducing our elderly wunderkind to her younger self, but the result is a true miracle as the actress seems suddenly entirely content as she walks off into the woods with her new child. 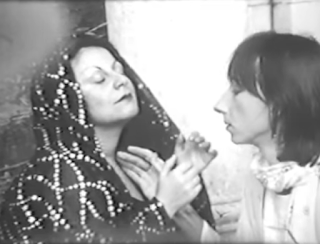 Starring Gregory Cruickshank, Viva DeLuxe and Marzipan with a background mix of music by Mahler and Prokofiev, Heustis’ film is simply silly, its redeeming quality providing seconds of bearable camp. We are told it captures the spirit of the early films, of which Heustis was a founder, of the San Francisco Frameline Festival.

Posted by greenintegerblog at 10:09 AM