Marcel Perez | Lend Me Your Wife || A Scrambled Honeymoon

the difficulties of marriage

Marcel Perez (screenwriter and director) Lend Me Your Wife / 1916; A Scrambled Honeymoon / 1916

Although often better dressed than either Charles Chaplin’s Little Tramp and even Harold Lloyd’s business-suited nerds, Marcel Perez’ Tweedeldees, Tweedledums, and Twede-Dans are somehow more savvy and able heroes than their comedic contemporaries. If Perez’s characters are often fools, they also represent a great deal more cleverness than Chaplin’s Tramp, Keaton’s bewildered innocents, or Lloyd’s mamma’s boys and the women to whom his characters are attracted, although often needing to save them from the melodramatic situations right out of 19th century stage plays and early film stock adventure series, they are also primarily strong, independent, and quite capable women who shoot guns, fly planes, navigate ships, and get Perez’s figures arrested, imprisoned, and married. None of the comic figures of the early cinema were married as often as were Perez' variations of his Tweedy, and although the actor sometimes appeared in drag and cross-dressed to get nearer to the feminine beauties, Twede has more in common with Harpo Marx than the far more loyal suitors such as were Chaplin’s, Keaton’s, and Lloyd’s heroes. Like Harpo, his tweedles would flirt with, chase after, wink, fondle, and steal a kiss from nearly female he encountered—except for the black women he often stumbled across whom he immediately shuns, which might surely be seen as racist but for the fact that his films actually chose to cast black women even if they were just bit parts, and miscegenation was unthinkable to the audiences of the day.

From 1910-1923 Perez appeared in hundreds of short and longer films as various figures based on variations of his characters names in different languages, Robinet and Bungles as well performing as the central figure in the 18-episode Le avventure straordinarissime di Saturnino Farandola, a science-fiction, travel adventure he directed based on the novel by Albert Robida. In 1923 his leg was amputated due to cancer, which ended his acting career; but he continued to write and direct films until the year before his death in 1929.

I should add, perhaps, that Perez was a fairly innovative director, in his popular The Near-Sighted Cyclist (1907) slightly blurring the images to match the vision of the cyclist who undergoes a series of terrible mishaps because of his problems with vision on his way to deliver a message. In several films Perez represented pain and electric-shocks by hand-drawing abstract radiating images on the individual frames. In another popular film, the 1914 melodrama Amor Pedestre (Pedestrian Love), Perez did not show any body part of his leading actor and actress except their feet, a gimmick he used again in his short Tweedy film of 1921, Pinched. Hitchcock later stole the idea for the early scenes of his Strangers on a Train (1951).

The films that I discuss here reveal the character's difficulties in marrying, the first out of necessity and the second out of love in which his step-mother constantly interferes—are typical of the dilemmas Perez faced in his works.

Lend Me Your Wife begins one morning when Tweedledum’s landlady (Louise Carver) fondly arrives in his room with breakfast, which apparently our hero does not appreciate, showing his disinterest in her obvious attentions by throwing the bread and jam in her face, which she wears throughout the following scenes almost as a badge of honor. 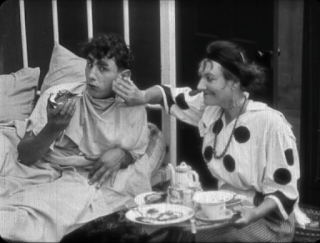 In response to his offensive behavior, the Landlady writes up a bill of the board and food charges, delivering it to her tenant, who makes it clear, pulling his empty pockets out of his pants, that he has no money.

Suitcase in hand, our figure sadly walks the local waterfront, determining to dive in and end it all, but at the same time taking up a long pole to determine whether the water is deep enough to cover his entire body. Apparently the place he first tests is, and he walks a little further, finding a spot where the water comes up only to his waist.

But meanwhile, a line electrician (J. Melvin Andrews), hanging high above on an electric wire pole, observes the unhappy figure and quickly slides down to the ground, unlooses his body harness and feet straps and runs to stop the man as he is about to dive in; indeed Perez shows the two of them hitting the water but through reverse projection, both of the returning immediately to the pier, the frustrated Tweedledum kicking his would-be savior into the river only to discover that his would-be lifesaver can’t swim. With a long fishing pole, he hooks the drowning man’s pants and, after a couple of tries, hoists him to safety.

So appreciative is the electric lineman that he takes his new friend home with him, explaining what has happened to his wife. But since Tweedledum proves a voracious eater who has an appetite for the wife  as well, both can hardly wait until the meal is finished and they can be rid of him. 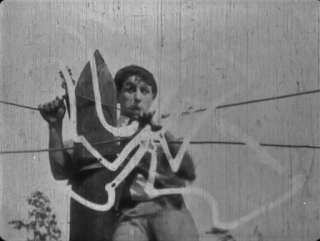 The lineman takes Tweedledum to his boss, who immediately hires him and provides his new man with the proper uniform. After some difficulty, our hero finally suits up, climbs the pole, and feels the shock of the electric current. But he is soon brought back to earth again when he receives a note that his wealthy uncle is arriving soon on a grand passenger liner, noting that if he grandson is not married he will write him out of his will. Since the intertitles have been lost, we are not told how or the uncle has suddenly gone away in order to arrive back in the same city where evidently his nephew had met him earlier in the plot.

It is interesting to note that this same situation where an elder demands his offspring be married before he’ll leave his money to him occurs in the Laurel and Hardy comedy of 1929, the Lloyd French film That’s My Wife, of note since Perez worked with Oliver Hardy as his co-star in the Bungles films.

In this instance, Tweedledum attempts unsuccessfully to hook up with the first two women he sees, both of which end in his being shunned and beaten. But suddenly he recalls the beautiful wife of his new friend and quickly rushes over to their home, pleading that the lineman loan him his wife in order to convince his uncle that he is married.

The couple hesitatingly agree, the wife a bit more interested in the phenomenon than the husband. Tweedledum rushes to the ship pier, picks up his uncle (Thomas Murray) and takes him “home” to meet his spouse; but before he can even warn his friends of this arrival, the uncle rushes in only to find his nephew’s wife sitting in the kitchen on what appears to be the servant’s lap. Shocked by what is going on, he calls attention to the situation to his nephew, Tweedledum having to act accordingly, which understandably causes a great of tension between the two, as the intruder is forced to send the homeowner into his own kitchen, where he burns himself and floods the floor. 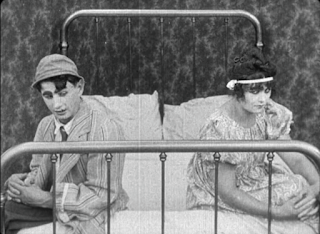 By the time they bed down for the night, the busybody uncle putting everyone into what he perceives as their proper room, things are more than a little tense as Tweedledum and Tweedledee (actress Nilde Baracchi, who played under various names in many Perez films) sit across each other on the bed, trying to pass the time but also beginning to feel slightly romantically inclined until Tweedledee sneaks out to join her husband. And when, later seeking out a pitcher of water, the old man discovers his nephew in bed alone and the servant in bed with his nephew’s wife, he is infuriated by the situation as it becomes apparent that he and Tweedledum are the guests in a household that been forced to accept their presence simply by an accident of kindness.

The uncle returns to the boat, apparently ready to forget about leaving any money to his nephew, but Tweedledum suddenly realizes how to save the day, hurrying back to the boarding house and finally asking, as she has long hoped, for his landlady to marry him.

In their nearly impossible attempt to hurry back to the pier from which his uncle’s ship is soon to depart, the couple find a preacher on another pier and convince him to marry them; but at the very last moment, the fishing rod still in his hand, he’s pulled into the water, the couple jumping in after. There the three tread water as he marries them, the uncle spotting them off his boat, as he too jumps into the water to join and congratulate the “happy” couple, Tweedledum and the Landlady with whom, if he does not enjoy a happy marriage, will at least possibly enjoy a rich life

A Scrambled Honeymoon of the same year survives with only one of its two reels, but the one surviving reel is still worth watching, even if the true humor of the film probably is revealed in the missing section.

On an outing evidently in Echo Park in Los Angeles the preoccupied Tweedledum sits on a park bench reading the newspaper when he vaguely registers the sound of two screaming women who a short while before had been enjoying a ride in a small boat. When he spies the mother (Louise Carver) he turns back to his newspaper, but upon hearing the cry once more he turns to see the beautiful daughter, Tweedledee (again played by Nilde Baracchi) and rushes out to save her, carrying her back to the bank, while utterly ignoring her screeching mother. 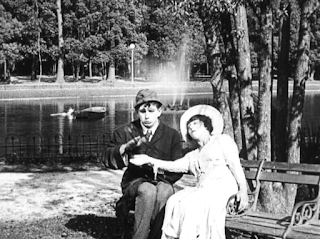 He places the beauty on the bench and proceeds to look after her as she returns to consciousness. When she perceives the situation, Tweedledee demands that he now save her mother, but he insists he’s afraid of sharks. Finally he suggests they make a telephone call to the police, stopping in a nearby drugstore for an ice cream soda. They make the call, but the police, playing games and musical instruments to pass the time, notice the phone is ringing only after the two T’s have hung up. But when the Tweedles phone back the head officer sends out the entire team who promptly put on inflatable innertubes and dive in to retrieve her.

Given his life-saving efforts, Tweedledum is now to be awarded Tweedledee in marriage, despite the best efforts of her mother to end their relationship. On the day of the marriage, she barges into his room as he is shaving to insist it’s time to join the marriage party, dragging him out for the ceremony with shaving cream still on his face. 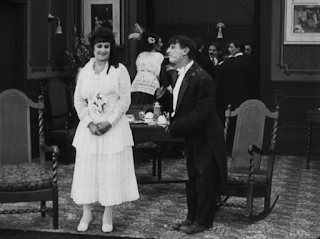 The couple quickly repeat the wedding vows, and the moment the guests have departed, she locks her daughter away in one room and her new son-in-law in another tying the two doorknobs together with a rope so that they are permanently pulled apart—that is until the mother finishes packing, fully intending to join them on their honeymoon. When she finally cuts the rope and the two, now dressed for travel, fly back into each other’s presence, she stands between them, hurling the three heavy suitcases upon Tweedledum’s back as she and her daughter Tweedledee rush off in the automobile, leaving the new husband to run after them on foot.

Obiously, the second reel would reveal her further interventions and perhaps their success or failure to free themselves from her domination over their relationship, but we shall presumably never know. 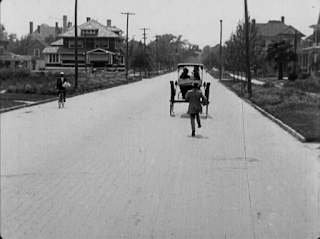