both sides of the bed

Given the fact that Marcel Perez acted in and/or directed more than 200 films, several of which have been lost or we have left only in fragmentary form, the film I describe below probably represents others of interest to the LGBT community as well. In an even earlier 1912 film, La signorina Robinet, one of his Robinet characters dresses as his lover’s female friend in order escape her jealous husband and ends up attracting a rather large male following on his way home.

By the time of Chickens in Turkey (1919), Twede-Dan, as he’s now called*, has decamped to foreign shores where, apparently, he has turned into a beach bum alcoholic, where we are told “Twede rocks himself to dreamland with a few bottles of high alcohol percentage hair restorer, shoe polish, etc, etc., etc....” While previously popular with all, he is now shunned, popular as “poison ivy.” 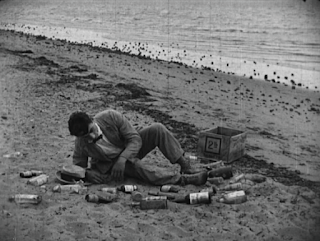 Meanwhile offshore sits the S. S. Flying Skirt cruiser, manned by a crew of “man-hating, hand-picked ‘chickens.’” Flo (Flo Bailey), the skipper hasn’t seen a man since Washington was president so the intertitle card reports. While her crew of women play leapfrog around her, Flo imagines a man seated at her knee.

A bit like Flo, Dan imagines a trio of “chickens” dancing in a ring around him before they sit on the sand to playfully tease one another. But they just as suddenly also disappear into thin air.

Finally, he spots the swimming beauties of The Flying Skirt and swims out to get a closer look, with his eye particularly attuned to a woman the intertitles describe as Dorothy (apparently played by Dorothy Earle, Perez’ real-time wife). But evidently Flo is also attracted to him, so to hide him the girls dress him up, as intertitles put it “like and ad in a magazine,” presumably, given the remainder of the story, as a female model.

The footage for this portion of the film is missing, but evidently overnight the cruiser is attacked by Turkish pirates and all the woman, save Dorothy hiding in the hatch, are captured and taken ashore, Twede-Dan among them. 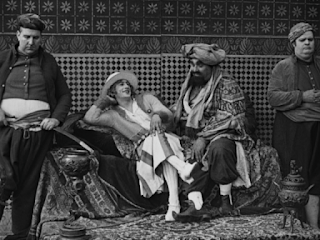 The movie picks up in the harem of Hassan Ramleh Murad (Pierre Collose) to whom the new catch of women are presented. In further missing footage he eyes them each carefully, all of the younger girls, Flo, and then Twede-Dan, inspecting for their beauty. After bartering for a bit, he finally selects Twede, who shows her delight as she is directed to the sultan’s personal couch.

In the time being Dorothy has been discovered, but dressed as a man she is sentenced to death and thrown into a cell. 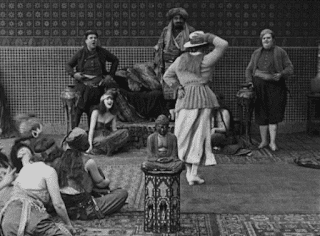 At that same moment the sultan commands his newly purchased beauty to dance. For a few moments Twede attempts to escape the demand, but when the sultan lifts his sword as a prod, she agrees to perform even without any experience with the belly dance.

What follows is a rather charming, if somewhat awkward version of what the intertitles describe as the “Turkish Tremble” combined with a Fox Trot, Twede evidently charming the sultan enough that he rises to join the dancer in what quickly becomes a kind of broad mimic of the kicks and sways of any Broadway theater dance number, as the sultan and Twede spin round and about each other, running toward and away from what is surely meant to become a deep embrace.

Simultaneously, we observe the actions of Dorothy after the others have been captured. Dressing up as a sailor she arrives at the sultan’s palace making her way past the guard into the confines of his compound only to be caught by one of the sultan’s personal guards. 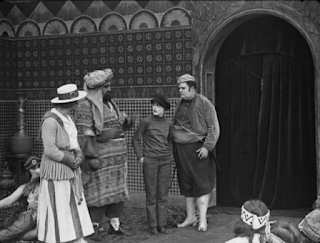 In anger and frustration, Twede throws off his wig, the entire harem rushing him when they recognize that he is, in fact, a handsome young man.

The sultan returns, Twede suddenly again donning his wig and hat, but seeing the entire harem gathered round his new bride the sultan is intrigued how this woman is able to bring his harem to ruin in only a few moments. Knocking out the sultan, Twede commands all the women to redress since they are returning to the yacht, while he goes on the prowl to free Dorothy.

Just as suddenly, the women disappear as Twede, dressed up in the sultan’s costume escapes the compound chased down the beach by the sultan himself and one of his guards, who come close to capturing him again—except at that very moment the drunken Twede-Dan wakes up on the beach where is has fallen asleep, very much alone, with three crabs pinching his pant-leg.

But what a dream! Not only did his fantasies take him into a world surrounded by women, but he had himself become a popular figure of the same sex. Obviously, this version of the Tweddles character discovers his sexual pleasures on both sides of the bed.

*See my earlier essay on Marcel Perez as Tweedledum in two films from 1916 on my World Cinema Review site. Perez played numerous figures in different languages beginning with the Robinet character named above, followed by Bundles before he became Tweddledum, Tweddles, Tweedy, and Twede Dan, as he was named in this film. Some attribute Perez’ inability to develop a reputation the equal of Chaplin, Keaton, and other comedic figures of the day to the fact that he played so many various characters in several languages.

Posted by greenintegerblog at 3:24 AM