No one might logically argue that Nagisa Ōshima’s Shinjuku dorobō nikki (Diary of a Shinjuku Thief) is uninteresting; if anything this kaleidoscopic piece of cinema is overlaid with so many expressions of its central themes of revolution and sexual freedom that it becomes almost muddled and murky in its complexity. Although there certainly are numerous “oppositions” portrayed in Diary, one might more precisely characterize its structure as being based as a series of contradictions or structural reversals: the bookstore employee, Umeko Suzuki (Rie Yokoyama) who arrests the book thief Birdey Hilltop (Japanese pop artist Tadanori Yokoo) and turns him in to the head of the Kinokuniya bookstore (played by the chain’s president, essayist Moichi Tanabe) later herself becomes a thief, experiencing what Birdey describes as a sexual orgasm up stealing as a kind of intellectual orgasm of words, each stolen piled-up book broadcasting the revolutionary words within. Later, after being scolded for having even brought the thief in for punishment, we discover that she is not even an employee but has used the occasion to develop a relationship with the boy. 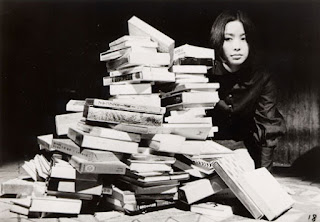 Even that relationship between this young woman and boy is quickly reversed as we come perceive Birdey as a slightly effeminate, passive mate to the possibly lesbian and certainly more sexually dominate Umeko. 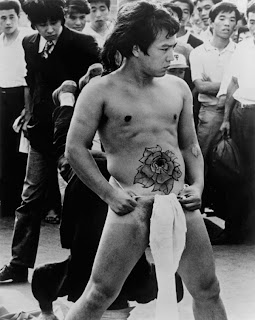 The disheveled man seemingly being chased by attackers is, in fact, the real Japanese folk singer, Juro Kara, who is in fact performing a stunt with his fellow players to advertise his street theater group, and several times throughout the film performing his folk songs while dressed in his underwear and a white thong.

The campy, transvestite-dominated street versions of Kabuki theater of Juro Kara’s company have more political force than the several documentations of student protests and demonstrations we are shown throughout. Sex is replaced by ritual, ritual transformed into naturalistic encounters. Even the dominant black-and-white images of Ōshima’s film are, in several  instances, reversed into brightly lit color clips. Nothing, in short, is what it pretends to be in Diary of a Shihjuku Thief; from the very first instant of the work, time is destroyed, the hands of the clock stolen, yet throughout the film we are reminded, again and again, of the exact time, not only in Tokyo, but  throughout the world. What pretends to be a “diary” is an outpouring of unnaturalistic scenes; the thief of the title bears the gift of freedom to all he encounters.

One might even question whether this “film” is what it claims to be, a series of narrative images: for much of the narrative is buried in symbolic stances and performances; characters become masked figures performing contradictory roles; dialogue and conversation is replaced by written text.

Critic David Phelps has argued, rather incoherently I feel, that Diary is a work wherein everyone desires to control; contrarily, I’d suggest that it is a work in which nearly everyone gives up any sense of ability to predetermine or dominate events.  Ōshima’s work, ultimately, is less a piece about revolutionary acts and stances, but is itself a shape-shifting beast that wrests power from any one theatrical, literary, or cinematic form. Written words talk. Moving images are slowed down to become static friezes or tableaux vivants; theatrical gestures become moving realistic acts, such as the Umeko’s final smear of her menstrual blood across her mid-riff. All things we might define as “real” become fantasy, fantasies turn into coarse realities. 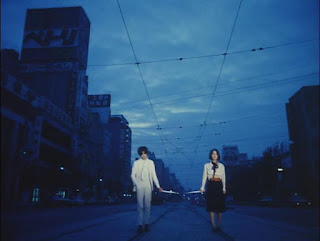 Yet for all that, I can’t truly pronounce this pastiche as a successful work of art. Like a jewel-studded sabre—or better yet, putting it in context, like an overwrought, drug-induced hippie art poster—Diary of a Shihjuku Thief seems too embellished, too preoccupied with its own layered illusions to emotionally involve and affect its viewers’ lives. While Ōshima has certainly summarized the tone and feelings of the latter half of the 1960’s decade, it leaves us with a sense of being simply confounded. And while that puzzlement is, perhaps, just what one might have expected from an historical perspective of an era of such contradictions, I felt dizzier as I left the theater than I felt freed or personally liberated. But then even living through 1960s I felt the same thing nearly every day. So it may be that Ōshima accomplished just what he had set out to do. Such self-congratulatory justifications, however, all too often lay behind that decade’s rhetoric, which I have always felt revealed the deep failure of that decade's exhilaration.

Reprinted from World Cinema Review (May 2012).

Posted by greenintegerblog at 4:48 PM