One of the very best of Roscoe “Fatty” Arbuckle’s films in which he performed in drag, Coney Island (1917) is filled with men and women escaping their lover’s arms, being picked up by passing others, and finding their way into new and more fulfilling relationships. This is also one of the most significant of the Arbuckle works in which Buster Keaton was learning the cinematic art he soon after perfected, and in this work he has a larger role than in any previous Arbuckle-Keaton collaborations.

The movie begins with Keaton and his pretty girlfriend (Alice Mann) enjoying the sights of Coney Island, Luna Park at night and the Mardi Gras Parade by day, which nicely serves as a document of the popular playground of the period. 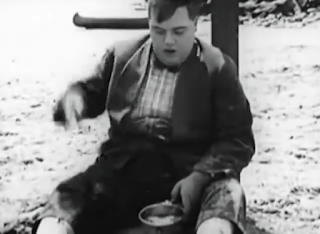 Meanwhile, Arbuckle sits on the beach with his wife (Agnes Neilson) petulantly playing in the sand with a small shovel and bucket like a child, clearly not at all happy that he’s missing out on the other Island sights. His wife reads a magazine, trying to ignore her ornery boy-hubby, but insisting that he remain at her side. Cleverly he throws his hat further off, and gradually rolls toward it, temporarily escaping her domain. Suddenly seeing a dog (the famous Arbuckle regular Luke) digging a hole into the sand, he gets a clever idea and follows its example, digging his own spot and finally, as he his wife reads and dozes off, burying himself while using a small pipe as a periscope. His wife soon realizes she’s lost sight of him, jumps up and goes on the search.

Throwing the sand off his heavy girth, he suddenly reappears a free man.

His wife, in the time being, running along the surf in search of her husband amazingly meets up with an old friend (Al St. John), a beau from the past, explaining to him her situation: “I’ve lost my husband.”

Arbuckle arrives at Luna Park and pays the fee to enter its attractions. His wife also enters separately, slugging out the guard who demands she pay before she goes through the turnstile. Outside the gate, Keaton and his girlfriend also stand, he searching his pockets, obviously empty, for money to take them into the paradise of adventures the park offers. When the wife’s “old friend” shows up and spots the pretty girl, he takes her in his arm and enters with her, leaving Keaton standing all alone. Keaton’s character finally hides in a rubbish bin which a park worker returns to the inside, permitting him entry. So begins a series of adventures that will eventually bring all these characters together, bit by bit, and pull them apart once more.

The “old friend” and Keaton’s former girl take in “The Witching Waves,” a kind of bumper ride which forces its travelers sitting in a cart over a floating floor of bumps. Keaton decides to explore the same adventure, which, of course, ends in his crashing into their cart and spilling out both men, while the pretty girl lies deep within, sick to her stomach from the choppy ride.

The girl and her new beau sit for a while as she recovers, he going off to buy her an ice cream cone. Seated nearby Arbuckle spots the lovely sufferer and quickly scoots over to be seated next to her, and when the man returns with two cones, he appreciatively accepts them, handing one to the girl and devouring the other himself. When the angry St. John figure attempts to slug Arbuckle in the stomach, he receives a face full of freshly swallowed ice cream in his face. And soon a brief food throwing altercation, involving the angry “old friend,” Arbuckle, and Keaton, as the last attempts to test his strength with a hammer and bell, transpires, ending only when Arbuckle kicks a cop in his ass and quickly moves the “old friend” into place so that that figure gets arrested and hauled off, taking him for a while out of the picture. 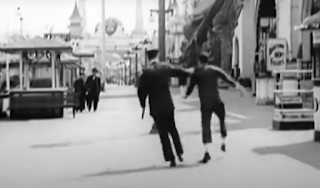 Our dear young beauty, accordingly, is now on her third man in the movie time of about five minutes.

Just as suddenly Arbuckle and his new friend decide to take a boat ride which begins with the boat riding down a long chute into the lake, which in this case moves so quickly that it dislodges both its riders upon impact, the pretty girl and Arbuckle struggling to save themselves from drowning.

Keaton comes to the rescue, saving his former girlfriend and attempting to pull Arbuckle out of the water, but due to the latter’s weight manages only to be pulled himself into the water, while Arbuckle scrambles out. The couple, Arbuckle and the pretty girl, decide to try out the bathhouse, but they have no outfits to fit Arbuckle’s girth. To solve the dilemma, Arbuckle steals the swimming attire of a heavy-set woman and retreats with his new gal into the dressing rooms. 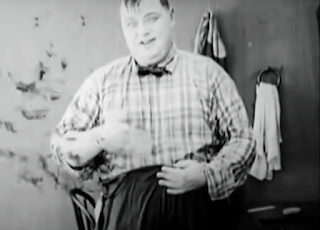 As Arbuckle begins to undress, he suddenly faces the camera and, in one marvelously post-modern instant, shyly signals the camera and the audience to move their eyes away from his privates while he continues to disrobe. The camera obligingly shifts up to his upper chest, shoulders, and head.

Perhaps for the very first time a character has called attention to his behavior as being related to artifice, a world of art, accepting it as a performative gesture but disallowing it to record his private life. And at the same time he has separated certain parts of his body as being so private that that they should not be witnessed upon the screen. This is an even more fascinating moment when we realize that only four years later private events involving his sexual involvement with actress Virginia Rappe would take away all any privacy he had left, as the press leered for several long years into his private affairs, ultimately destroying his career.

Keaton now shows up to the same bathhouse seeking a job as a lifeguard; he is just as quickly hired. When he goes to change into his swimming suit he discovers Arbuckle, without his wig, dressed in female attire, laughing at the sight, while the pretty girl brings her gigantean lover his wig, the now ready lifeguard falling into a faint at the sight of his former girlfriend’s beauty—or perhaps in shock by her interest in Arbuckle. 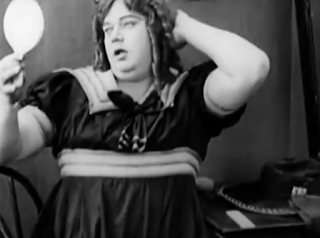 Dressed as a woman, Arbuckle faces some of the same difficulties that today transgender individuals must. When he mindlessly enters the men’s shower, the men are terrified by the sight a woman in their midst and order her out. She is greeted more friendly by the women, but when, again without thinking, Arbuckle grows warm and momentarily removes her wig, he gets a strong glare from one of the women’s room habitués.

The wife’s “old friend” in the meantime is locked away in jail, and Arbuckle’s wife returns to the film still seeking her missing husband. Reporting the incident to the police, she shows them a picture of her husband without them recognizing his image. But at the very moment, her “old friend” is brought out from his cell, she stunned to find him there. She pays his bail and he is released, she also showing him the locket in which she keeps her husband’s photograph. “That’s the guy who stole my girl,” he declares, and they both move forward joining forces to catch the culprit.

Arbuckle and his pretty girlfriend are now skipping, along with Mike the dog, on the beach that previously, with his wife, Arbuckle hated. Tired out from his frolics, he sits on a bench where nearby, he suddenly recognizes, on another bench his wife and her “old friend” are seated. At first he is terrified, but realizing he is now disguised, he returns the “old friend’s” wink as the man, ignoring the continued litany of woes expressed by Arbuckle’s wife, slips over to the other bench to be near the lusty beauty, the two continuing to flirt.

When the wife discovers her companion gone she looks over, vaguely recognizing the woman, taking out her locket again to compare the features. The lifeguard wanders buy, and she asks him who is that lady? “That’s no lady, she’s a man,” he laughs, pulling off Arbuckle’s wig with a fishing pole he happens to be holding.

Suddenly seeing Arbuckle for who he is, the “old friend” goes into a fit and a full battle erupts between Arbuckle and him, in and out of water. Keaton’s lifeguard runs off only to discover his original girlfriend still on the beach; grabbing hold of one another, the two run off together. In horror, the wife rings up the police. This film’s version of the Keystone Cops eventually arrive, arresting the both of them. 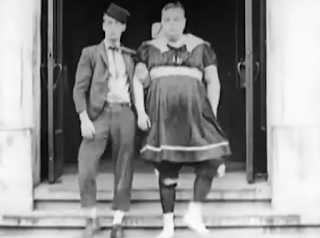 At the police station, Arbuckle begs the captain to put him in the same cell with the “old friend,” which, against all reason, they do. The two duke it out intensely, alternating in their kicks and hits upon the other’s body. Finally the police, one by one, attempt to subdue the couple, but each time one enters the cell, the “old friend” distracts him while Arbuckle knocks him out with a stolen police baton. Eventually, they’ve laid the entire force out flat, the wife insisting that she be let in to deal with them. Once the door is opened, the “old friend,” taking a look at the woman he used to know, quickly sneaks out, while Arbuckle, now forced to again confront his wife, slowly backs out and locks her up in the cell, skipping like a little girl in his freedom as the couple, Arbuckle and his rival leave the station arm in arm, resolving: “That women were the cause of all our trouble. From now on we cut them off. We stand one for all, and all for one.” These two musketeers’ new camaraderie, however, does not last long, as the “old friend” suddenly spots a girl in passing and runs after, Arbuckle, still half a woman in his costume, walking off in the other direction.

This is about as close as the great comedian could possibly get to actually committing his drag character to take up a full relationship with another man.

Posted by greenintegerblog at 11:13 AM