Roy Del Ruth | The Life of the Party

Critic Richard Barrios includes the 1930 film The Life of the Party directed by Roy Del Ruth on his list of LGBTQ-related films simply because its central character, Flo (Winnie Lightner) momentarily refers to her and Dot’s (Irene Delroy) employer at the ACME music company as a “pansy”: “Here comes the pansy,” she warns her friend. The actor playing that role does not precisely fit the “pansy” type, although he is a bit persnickety and is certainly not fond of his women employees. But nothing is particularly made of the moniker, and the film doesn’t explore any gay affectations or traits. He fires Flo mostly for her foul mouth and Dot for her inability to properly convey the songs through her piano playing through which he sells the scores. Moreover, the good-looking Dot is attracting men who simply have no desire to buy sheet music; they hang around her rather to see if they can get a date. 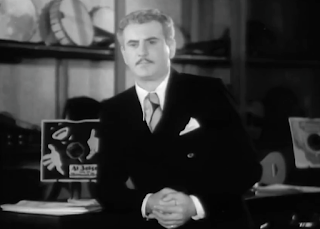 Flo’s line is one of the first in the film, and I was ready to abandon watching the rest of it, finding so little of importance regarding my focus on LGBTQ filmmaking.

But I had enjoyed Del Ruth’s first version of The Maltese Falcon and his Broadway Melody of 1936, and although the film’s plot shares the genre of the gold-digging girls of films such as Gentlemen Prefer Friends (1953) and How to Marry a Millionaire of the same year—a genre of which I’m not very fond—there was something immediately off-kilter in this film, from Flo’s manic singing of “Poison Ivy” in the very scene and everything going forward. Flo sings:

When he asks for coffee

I fill it iodine.

He got a poison ivy

instead of a clinging vine.

And it is clear that she most certainly will have difficulty finding the right man, particularly one who might deal her fast-talking coarse demeanor and her street savvy behavior. The utter innocent Dot is unfortunately highly influenced by her friend, and when she discovers that her longtime boyfriend Bob has just married a wealthy elderly matron—one of the many inexplicable oddities of this film—she’s ready to join Flo on a quest to find a rich man. This was also intended to be a musical from which, because of the perceived disinterest in musicals, the songs were later cut. Although the songs were retained in the international versions, today it is believed that no copy exists containing Earle Crooker and Sidney D. Mitchell’s original music.

The girls first begin their journey by joining up as models for the fashion designer who has been pestering Dot, Monsieur LeMaire (Charles Judels) who more fully does fit the stereotype of the pansy. Not only is he a fashion designer, always a pansy character, but gushes with sweet joy at seeing his dress hanging upon Dot’s lean frame. Yet, Darryl F. Zanuck and Arthur Caesar’s script purposely confuses matters by also making Monsieur LeMaire seem to be a womanizer, as he immediately arranges for the two girls to borrow his beautiful dresses for a evening dinner foursome to which he has also invite a close male friend.

Even in offering up their evening attire he appears to be quite gay, announcing “This one was made for the Princess....and this one the Prince wants to wear.” Still he insists they immediately take the key to his suite, dress up for the evening and await his and his friend’s arrival.

Of course, sisses in these early films were often seemingly interested in the opposite sex, and were sometimes even married. Consider Horace Hardwick’s (Edward Everett Horton) marriage to Madge (Helen Broderick) in Top Hat or, in that same film, dress designer Alberto Beddini’s (Erik Rhodes) attempt to marry Dale Tremont (Ginger Rodgers). And certainly LeMaire has the vast swings of emotional behavior, from a child-like leap for joy when he is pleased to his violent fits of destruction when someone goes against him, and you might imagine the chipper nattering pansy suddenly throwing a conniption fit. 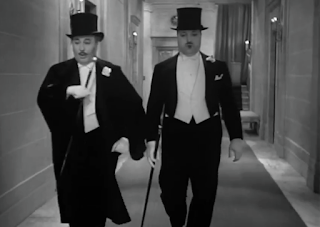 Moreover, LeMaire’s verbal expression of his pleasure, with loud shouts of “Yoohoo” match the standard cry of the pansy, comparable with the chorus line members in the 1932 film Tenderfoot of “Whooooo.” The fact that the friend he has invited for dinner, who looks somewhat like him, only speaks throughout the film with shouts of “Yoohoo” further suggests that these two gentlemen are more than casual acquaintances, perhaps long-time companions who simply enjoy toying with young women.

It doesn’t matter since Flo and Dot, now dressed in stunning gowns, decamp for Havana where they hope to discover far richer suckers. In this case Flo discovers that the wealthy creator of the popular drink Rush, A. J. Smith, is staying at the same hotel, and mistakes a handsome gigolo, also going under that name, as the perfect man to marry Dot, who she has now reconfigured into wealthy widow (she’s sent a telegram declaring that millions of dollars have just been transferred into her account since the death of Dorothy’s husband), all of which further complicates things.

The real “Jerry” A. J. Smith (Jack Whiting) is a perfectly nice everyday guy with whom Dot hits it off immediately; yet Flo won’t let that romance even get started in her attempts to link her friend up to the fake she believes is the real McCoy (John Davidson). 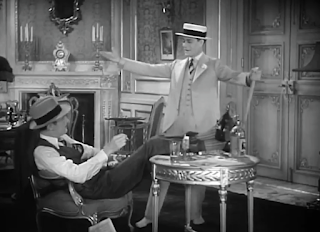 Here also we observe things that are never quite explained or even explored more than for a couple of frames. Why does the gigolo who they’re courting just as he courts them have a young man stashed back in his hotel room? And why is he also the near perfect fit to a well-cultured, slightly effeminate gay boy who also throws little persnickety fits when he’s crossed?

More importantly, and even more inexplicable, is the question of how and why he knows Monsieur LeMaire—who shows up in Havana to reclaim the stolen dresses and demand payment for the destruction the girls left in their wake. Evidently, they are long-time friends. Certainly there is utterly no logic for the plot to suddenly reveal such a strange friendship except to suggest that the fake A. J. Smith is also a gay man who was involved in LeMaire’s circle of friends.

Del Ruth’s film makes no attempt whatsoever to explain these oddities in the story. And in the end it doesn’t matter since Dot and the real Jerry fall in love, he paying $5,000 for the girl’s damages, while Flo gets engaged to the strangest figure of all in this odd film, the eccentric Colonel Joy (Charles Butterworth) who loves horses and invents a toupee that is cut away in the middle to reveal its wearer’s baldness and a lantern that doesn’t light. The lantern, he explains, is to be kept by your bed so that if a burglar comes into your house you can grab your lantern and sneak up on him. Perhaps his creation sheds light on this film’s may gay mysteries about which we, as viewers, are kept in the dark.

Posted by greenintegerblog at 5:00 PM