Harold Lloyd’s For Heaven’s Sake (1926) is a film one might describe as representing a series of felicitous accidents, the kind that Lloyd and Buster Keaton were known for. While the worlds of Chaplin’s the Tramp often collapsed upon him resulting in his constant adventures on the road and near endless hunger while being chased by bullies and police who eventually put him away in jail, the whole world might fall down upon Keaton’s sad figures without brushing a hair on his head. A bit like superman, Lloyd was able to leap tall buildings, turn the police on the run with a simple look in the other direction, and survive a beating without even knowing it was taking place. 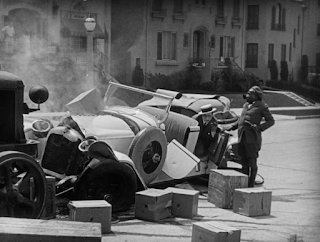 In Sam Taylor’s film his character Harold Manners, who has just purchased a new car to match his white pants, totals two new autos in the same day, the first simply by a fluke of chance, the second through its being usurped by the police in chase of a vicious gang on the run, and, finally, a locomotive charging into it as Manners gets out to check on the damage the bullets have caused. Of course, if one had, like Manners, an “unlimited” income perhaps the world would be cease to be troublesome too.

In fact, Manners proceeds throughout the rest of this film to move smoothly from his mansion and club in the best part of town into the depths of skid row without a blink, unintentionally setting fire to Brother Paul’s and daughter Hope’s coffee and doughnut stand from where they spread the word of God through deeds, buying them a new mission by the stroke of a pen upon his checkbook. 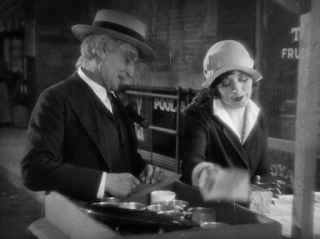 Horrified that his name might be associated with a good deed, he hurries back to the slums to insist they remove his name from his unintentional gift, only to once again, through the evil intentions of a pool hang gang, slip and sail into the face of the beautiful Hope, with whom he immediately falls in love.

Before you can say “Hallelujah,” he and Hope have been put in charge of a special mission celebration, for which the love-smitten Manners gathers up the neighborhood pool-hall sinners in a way that even Damon Runyon’s Sky Masterson could not even have imagined in Guys and Dolls. The calm-headed Manners simply gets every red-blooded brute in the territory so mad at him that they chase him and down the streets as he gathers up more and more of them on his way back to the mission house. Once in, Hope serves ups coffee and newly baked cakes while he promises them stories that are better than anything the daily news has to offer, and they’re hooked. 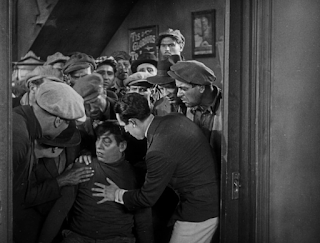 The one pool-hall hold out, Bull, arrives to battle it out with him. But once again, while trying to rustle up some further hymnals, Manners manages with prat-fall timing to tame the beast with flipping chalk-boards, loose planks of a table, and swinging light figures that forces even the meanest man in the bunch to pronounce: “Fellers, if this guy can preach like he can hit, it’s gonna be tough season for Satan.”

In no time at all, he develops a regular congregation, finds jobs for some of his followers, and generally makes new friends of these toughs while courting the beautiful Hope, finally asking her to marry him as they lay on a tar beach under a crescent (laundry) moon. 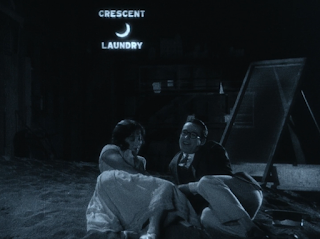 Uptown, however, his all-male club members worry about his sanity in giving up their company for a lowly mission girl, and determine to kidnap him in order to bring him back to his senses. Clearly, this all-male shrine doesn’t take well to Manners’ heterosexual bent along with the he-men company he keeps.

Yet it is precisely the rude mechanicals, now all functionaries to his wedding, who remain the most loyal to him. Shocked by seeing him driving away in their car, they track him down in his old club hoping to retrieve him. But in the meantime, in their utter disappointment for his seeming abandonment, they have spent the morning drinking, and are now too drunk to do anything but save him by causing mayhem in a world of pristine order.

To get them back to the wedding on time, Manners must shepherd his irascible flock through various hilarious adventures via taxi, trolley, bus, and auto back to the mission house showing up just in time to say “I do” and drop his bride’s ring onto the tail of the mission cat.

Throughout all of this Manners has acted as a perfectly effete and myopic being who seems to be blind to everything by Hope’s pretty face. Except for his focus on returning his wedding party to the celebration, he seems not to have registered a single being or event among the numerous comic encounters the film catalogues. If he’s made a grand transformation in his voyage from the very best part of town to the world on the wrong side of the tracks—the dichotomy posed by the narrative itself—we’ve been privy to very little evidence of it. When and how did such a seemingly effeminate elite suddenly become an everyday man? Or, to put it another way, when did the series of “accidents” he encounters become intentions.

For evidence of that we must recall, I argue, a very seemingly inconsequential event early on in this story, another kind of accident but of the very least importance despite the fact that the narrative spends a rather long time on it, particularly given the almost ceaseless forward rhythm of most of the rest of the film. 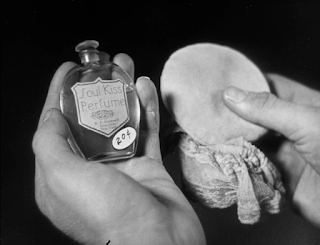 When he first arrives at the mission, a thief having just emptied the contents of a women’s purse is left with a power puff and a small vial of perfume. To rid himself of these meaningless pieces of evidence he slips them into Manners’ pocket as our “hero” enters the mission. As he sits down next to a skid row denizen so that Hope might serve her newly cooked doughnuts and cakes, we notice that the vial of perfume breaks.

Slowly, both men get a whiff the perfume, assuming that its fragrance is coming from the body of the other. In the only LGBTQ moment of this film, we see both men attempt to weigh the meaning of their olfactory sensation, checking each other out with some sense of curiosity, almost as if the perfume might naturally draw them sexually to the other, and if so, what that might mean. Both coyly smile as they ponder the implications. Finally, seeing the broken vial dripping from his pocket to the floor, Manners also discovers the power puff, which, when he pulls it out of his pocket, the other notices it also with a sort of recognition of inevitability on his face as if to say “it stands to reason that a man so well dressed and groomed might be of that kind.” 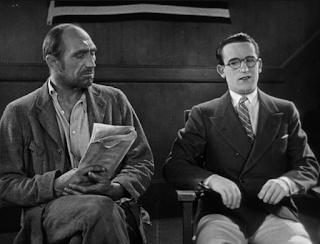 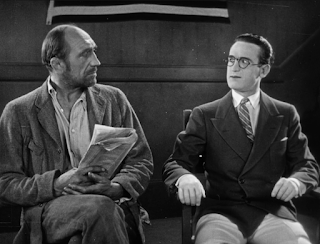 Manners tosses the powder puff away, but it lands, so we observe, on the plate of Hope’s freshly baked cakes, which, when she offers them to Manners, he takes up the puff now mistaking it as a cake and begins to chew.

It’s not only distasteful, but quite inedible, and you can see on his face the possibility that his newly beloved female might not be such a very good cook if he were to make her his wife. Yet despite the inedible thing stuffed into his mouth, Manners politely repeats his attempt to chew. 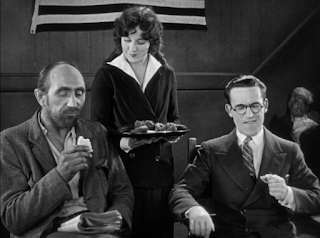 It is almost as if he is eating up that inedible something in his past, determinedly swallowing that for which he no longer has an appetite. Love has strangely found a way to his heart with the rejection of his stomach. All the metaphors usually applied to heterosexual love have been reversed as Manners purposely rids himself of his apparently feminized past, almost playing out a battle between his sexual identifications, past and present.

It’s a subtle scene, and seemingly out of place in this fast-moving mostly physical comic work, a piece of cinema more about machines and bodies than about the inner workings of the mind and heart. But it’s crucial if you want to make sense of how the milquetoast Manners might survive in the frames after the film goes dark.