Eddie Cantor’s cinema musical, Whoopee!, fresh off the Broadway stage, closing in 1929 after 407 performances was also a hit in the movie theaters. The songs are quite wonderful, including from the original production Gus Kahn and Walter Donaldson’s, “Making Whoopee,” "Yes, Sir, That's My Baby" (not in the movie), and “My Baby Just Cares for Me”; and despite the kitsch parade of the Goldwyn Girls (which included Virginia Bruce, Paulette Godard, and Betty Grable) choreographer Busby Berkeley, in his first movie outing, had already established some of his wondrous aerial-viewed numbers that created remarkable kaleidoscope effects never before seen on film. 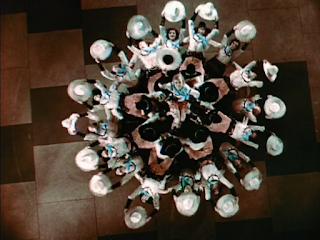 But then there’s Eddie Cantor (as Henry Williams), Ethel Shutta (as Mary Custer), Paul Gregory (Wanenis), Eleanor Hunt (Sally Morgan), Spencer Charters (Jerome Underwood), Chief Caupolican (Black Eagle) and a whole crew of cowboys and cowgirls, many of whom can’t act, who play out a script determined to demean nearly everything it touches: Native Americans, Jewish businessmen, blacks, women, and in particular, queers which throughout Eddie Cantor’s character keeps claiming as his default personality. Racial and sexual stereotypes in the late 1920s and 1930s were obviously seen as something so funny that it drew audiences in droves to the theater, since, except for the music, that’s primarily what this equal opportunity offender of a work delivers up for your delectation.

You have to give Cantor some credit simply for his audaciousness of playing a hypochondriac weakling who, as he himself keeps repeating, is simply too “delicate” to get married. Besides at any moment he may die of one of his dozens of ailments which, to protect him against, his nurse Mary Custer keeps spooning out liquid medicines and doling out pills.

Actually, the same kind of figure also made Hollywood a great deal of money in Rock Hudson’s 1964 film Send Me No Flowers, Rock playing a figure who also assumes he’s about to die and, accordingly, begins to look for a new husband for his wife, Doris Day, attending only throughout the film to the look and sexual appeal of other males and, eventually, even sharing a bed with his next door neighbor, Tony Randall.

And like Rock’s perverse take on things, in Whoopee! he have entered into a very strange universe. Sally is about to be married, and a whole contingent of cowboys and cowwoman have descended upon at the Morgan ranch to celebrate. Unexpectedly, her former lover Wanenis also returns from working in the mines in Montana. He’s definitely not made welcome back in his childhood stomping ground, and is told to stay away from Sally and the wedding. 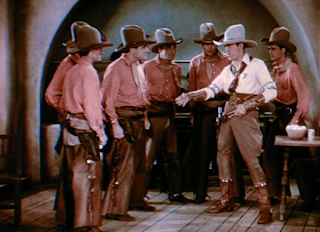 And why the asthmatic, nervous, terrified pansy Henry is hanging out on their ranch in the American Southwest is never explained; perhaps he has traveled there simply for his health. But what he does otherwise or did prior to his endless kvetching, we’re never told. Somehow this strange fish out of water keeps getting hooked by women who make his life quite difficult.

In Whoopee! Cantor mostly spends his time running away from the caresses of his nurse (as he explains to her: “Why do you keep pestering me with your overtures when what I need is an intermission?”) and—when Sally Morgan, about to be wedded to Sherriff Bob Wells (John Rutherford), gets cold feet and runs off with Henry, lying that she and he are about to elope—attracting the attentions of nearly everyone else in the work who chase after the couple determined bring back Sally and to do away with Henry.

You see Sally is really in love with the local half-breed Wanenis (Gregory) who can’t marry her because of his part-Indian blood. Both Sally’s father and Wanenis’ dad Black Eagle refuse to even discuss the possibility; but then due the miscegenation laws of the time it was also a felony. So what’s a poor girl like Sally to do but grab onto the underdog weakling Henry and catch a ride to the nearest ranch where she hopes to escape. On their way he sings of his one “girlfriend who turned out to be a friend of a boyfriend of mine.”

To describe the plot that follows would be bit like trying to chart out in a few paragraphs a trip from Texico, New Mexico to Wayne, Maine. And I’m not about to attempt it. It’s better to focus on just a few views along the route.

They run out of gas and steal a gallon by gunpoint from a passing auto. They arrive at a ranch where Henry is immediately put to work as a chef (although he’s never cooked nor hardly eaten a full meal in his life), and there he encounters the man whom he robbed, also, it turns out, a very “nervous nellie.” Together the two talk about their operations and attempt to show one another their scars, peering into one another pants and lifting up each other’s pant legs before tumbling over and over one another in attempt to see just each bodily scar is and observe its full length and width. When Canton finally gets a good look and is told the outrageous prince Underwood had to pay for the operation, Cantor quips: “Oh well no wonder, you got hemstitching!” Obviously, it’s one of the most blatantly gayest scenes ever put to film before a couple of gay men and lesbians laid down together with one another on the screen to have sex. 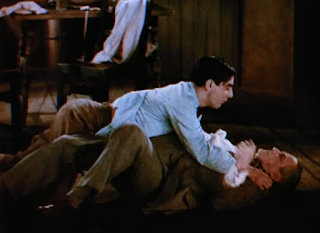 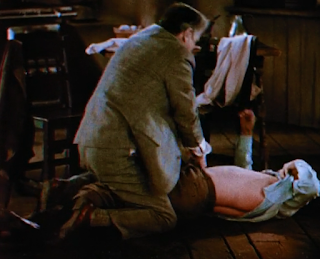 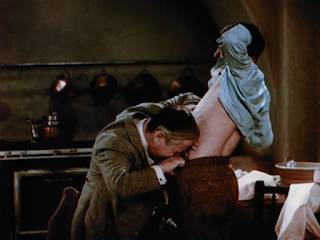 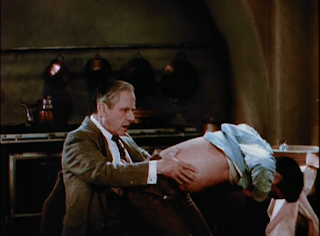 While pretending to be chef he hides in the oven which, as expected, explodes, turning him into a blackface character which serves as another cover and gives him the opportunity for a few more distasteful racial jokes, as well as a few jibes at Al Jolson. Fortunately, he does attempt a “darkie” accent although the situation obviously requires him to do a song and dance number in the style of Bojangles.

For a long, awfully unfunny vaudevillian-like skit that is clearly meant to satirize modern-day psychiatry they all call in the ranch owner’s bratty college-educated son who, requiring all the suspects to hold plates in both hands, requires them to free associate with the words he tosses out, presumably forcing them to tremble and drop the dishware to their feet. They don’t, but Henry cheats.

For the next episode he and Sally return to the road, running off to the nearby reservation (“I called ahead to get a reservation”), the whole gang on their tail. Meeting up with Black Eagle again, he’s forces to smoke a peace pipe and is inexplicably made a member of the tribe. And there, after a truly abysmal Indian fashion show with Goldwyn Girls as models, Henry meets up with his friend Wanenis and, seeing him for the first time naked from the waist up, spends several moments commenting on and stroking his pectoral muscles and lean chest. As Richard Barrios observes, it may represent “only a wee moment of shtick, but nevertheless would hardly have been acceptable by a ‘regular’ leading man instead of a comic”—or, more specifically, by a comic playing a sissy.

Sally finally catches up with her lover, who—after they restate and re-sing their love for one another—is about to walk away from her once more knowing they can never be married. Miracle of miracles, Black Eagle reveals the truth: Wanenis is a white boy he pulled from a ranch whose father and mother had died, raising him as his own son. Blessed be the saints, he’s of pure blood and can marry his white squaw. Sorry folks, but that’s all!

That’s the way this film works, creating such a comic disaster, that against all odds the nurse gets her Henry, even if why she wants him cannot be explained. As the song goes:

I wonder what's wrong with baby

My baby just cares for me

Looking at this movie today, with its vision of any “others” who don’t fit the all-American white heterosexual standard as being simply targets of vaudevillian humor, it’s hard for anyone to like this bawling bigoted baby.

Posted by greenintegerblog at 3:53 PM