Wesley Ruggles | Too Many Husbands

Claude Binyon (screenplay, based on a play by W. Somerset Maugham), Wesley Ruggles (director) Too Many Husbands / 1940

In his book Screen Out: Playing Gay in Hollywood from Edison to Stonewall, Richard Barrios summarizes the LGBTQ Charles Ruggles’ 1940 comedy Too Many Husbands in a couple of dismissive paragraphs:

"Columbia’s Too Many Husbands (1940) was the typical bauble of the kind that will likely never be seen again—insignificant, devastatingly professional, and indifferent setting for stars to show off with nonchalant ease. ...It had a primeval plot unworthy of its creator [Somerset Maugham]: the one about the widow who has remarried and finds out that the husband she thought dead has been marooned on a desert island. Jean Arthur was the unwitting bigamist, and Fred MacMurray and Melvyn Douglas were spouses one and two. Amidst the expected ‘What am I going to do with two husbands?’ bedroom farce complications, there were contained some unmistakable gay allusions.”

Barrios goes on to site the major “gay” scene in which, the two ex-husbands forced to share a bedroom, begin to describe one another with the standard husband and wife familiarities of comedy writing: “you wonderful thing,” “darling,” “sweetheart,” etc. deflating the ego of one another by suggesting that the other has become his feminine, therefore gay, partner, rendering him meaningless with regard to the decision their mutual wife must make about who she will ditch and which one she will keep. It helps that the two, before the MacMurray character (Bill Cardew) went missing in a boating adventure, were close friends, the plot hinting that such a friendship may necessarily have to be transformed into something even deeper if the two are both to survive.

Shuffled off into a room which Arthur’s (Vicky Lowndes) current husband Henry designed for the event of a female offspring, the macho MacMurray—who throughout the film shows off his athletic abilities and profile like some high school teenager—turns the very contents of the room into an expression of his friend Henry’s queer decorating abilities: 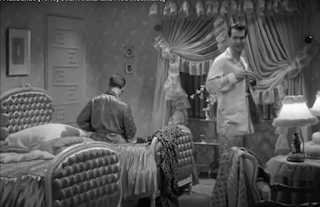 bill:  I guess when you decorated it you made if just what you wanted

for your very own room.

henry: Rave on, you wonderful thing!

bill: (looking at the draperies) What’s this stuff—mosquito netting?

bill: (with sibilant mockery) “Dotted swiss. You even look pretty when

you say it! (Going to the vanity table and picking up

two power puffs.) Hmmmmm...which one is mine?

As Barrios concludes: “The equation is ‘decorating abililty=fussiness=unmasculine=gay.’ ...It helps to have a smirkingly macho actor like Fred MacMurray, plus a Breen Office so worried about the script’s bigamy that it doesn’t comprehend the undercurrents.”

Yet, that isn’t where the LGBTQ issues end in this not so totally “insignificant” movie. Because she cannot chose among them, the two are forced to spend even more time together, including one entire night “on the town”—in actuality, so we observe, simply sharing a bench to feed the pigeons—in order to punish Vicky for leaving them both hanging without her full commitment to one or the other’s love. But as any red-blooded English-speaking adolescent knows “feeding the pigeons” linguistically calls up the act of masturbation, an activity which evidently these boys, in their utter loneliness, were sharing. Is it any wonder that they continue their exaggerated words of endearment for one another into a later scene. 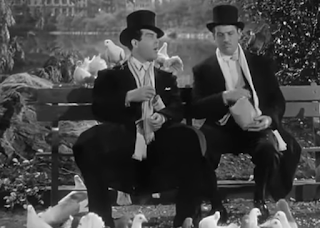 Moreover, although the structure of this story is certainly as hackneyed as they get—we last encountered it, as you may recall, in Michael Curtiz’ 1930 film The Matrimonial Bed—it was used to great comic effect the very same year as Too Many Husbands by director Garson Kanin when the adventuresome wife, Irene Dunne, was also stranded on an island, with Randolph Scott, before returning home to her just remarried husband, Cary Grant. The fireworks between real life gay lovers Scott and Grant, obviously more obsessed with one another than with either Dunne or Grant’s second wife played by Gail Patrick, makes this work one of the most memorable not only of its genre of pre-1960s LGBTQ films. 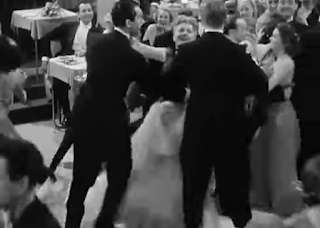 And interestingly, Vicky in Ruggles’ film likes the attention she’s now receiving from both men so much that she finally is forced to let the court make the choice of which husband to whom she will remain married. Inexplicably, the court chooses her first beau, Bill, supposedly leaving her current and more caring hubby in the cold. Yet Vicky arranges that while she’s married to Bill, Henry should feel free to continue to court her, all three meeting up that very night at their mutual favorite dining spot, Frank’s, where they dance out in public as a trio, suggesting that the future may entail the kind of continental configuration that Noel Coward proposes in Ernst Lubitsch’s cinematic version of his play Design for Living, a ménage à trois that hints that they might better learn how to rephrase their endearments for one another—unless the MacMurray character truly does decide, as Henry has proposed to him, to once again take up his wanderlust by traveling to Siam or Greece. I surely wouldn’t describe this film as “indifferent.”* 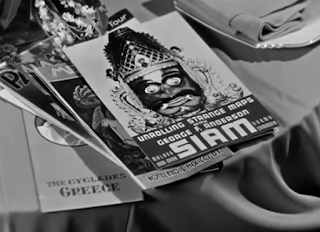 *Ruggles’ film even posits a kinkier alternative as Henry’s secretary early in the work describes to Vicky how, loving both of Vicky’s husbands, she has imaginatively shared both they honeymoons with them, partially fulfilling her “impossible” love.