A man stands at the counter to a bakery shop.

Man: (Rapping impatiently on the counter with a gloved hand) Young

lady! I’d like to order a cake. I must have it in twenty-four hours.

Clerk: What kind of cake would you prefer?

Man: A five-dollar one. A birthday cake. Chocolate. All chocolate. (Stares

into space mooningly) I love chocolate!

Clerk: Would you like a little rose on top?

Man: No...make it a pansy! (He widens his eyes and bares his teen in a

“You know what I mean” smile, then hurries off). 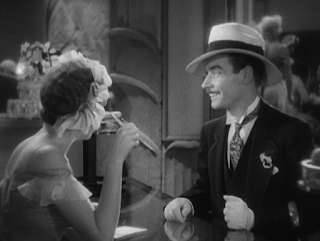 The clerk just happens to be Betty Grable before she became a star. The man is not mentioned in any list of credits I’ve seen, and the incident and role is completely incidental to anything else about the movie; yet, as film historian Richard Barrios argues, while it is clearly a caricature, it is also evidence of how in so many of the early 1930s films before the Hays Code got serious about banning any reference to homosexuality that gay men co-existed in “a milieu where they might mingle with straights, are accepted at face value, and are neither punished nor censured.”

If you thought, coming at the beginning of the film, it might serve as a clue to the rest of work, you’d be much mistaken. For this Eddie Cantor vehicle, although from time to time hinting at LGBTQ issues, characterizes the hero as far more heterosexually inclined than in his film of the previous year, Whoopee!, allowing him to court a young beauty, Joan Clark (Barbara Weeks), the daughter of the boss, while having him chased, much like the nurse in his 1930 film, by the bakery’s physical coach, Helen Martin (the always wonderful Charlotte Greenwood). 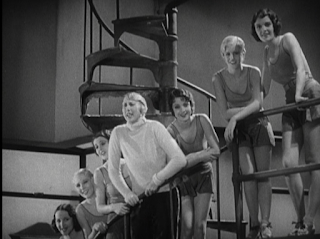 As head of the surreal workout exercises of the all-female staff of the Clark bakery, it is even hinted that Martin may be an old dyke delighted to have a daily regimen of Sapphic beauties traipse before her. And indeed Busby Berkeley’s choreography of their work-outs as they sing songs such as “Bend Down, Sister” (by Con Conrad, Ballard MacDonald, and Dave Silverstein) in which that mad coordinator of terpsichorean beauties demands each of the scantily clad Goldwyn Girls bend before their coach—and more importantly for the male moviegoers’ eyes—to reveal her cleavage. And the way she sizes up each of her trainees, literally defining them by their height, curves, and other bodily features surely suggests that she has an eye for the sweet doughnut makers she been asked to batter into good shape. 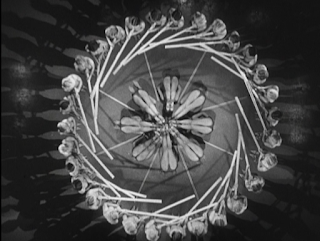 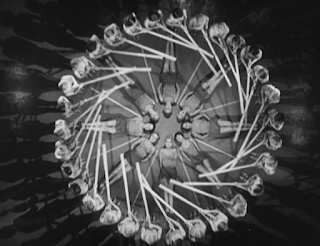 But Martin, who is also interested in the supernatural, is convinced that it’s finally time that she finds a husband. And poor Eddie Simpson (Cantor) is sent forth by his imperious and crooked employer, the spiritualist Yolando (Charles Middleton) to offer him up as a sacrifice for the possibility of having an ally implanted in Mr. Clark’s (Spencer Charters) highly successful business. Once she gets her hands on him, she not only carries him away, but rides, batters, and beats him into a shape that looks more like a pretzel than a straight man. 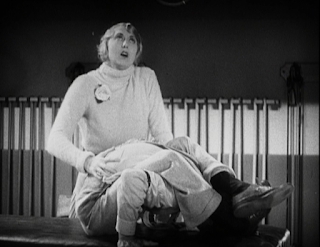 Eddie escapes her pummels of love by entering the boss’s office at the very moment when has been promised, also by the scheming Yolando, a new efficiency expert. Cantor has always had a way with older men—indeed a great deal of his humor has to do with aging, ailing, and dying. A typical standup joke which he trots out in this film: “I wanted to kill myself, so I stood in front of an approaching taxicab. But it was yellow.” And before you know it, the two have almost gotten into the physical comic routine rolled out in Whoopee! of showing each other their hospital operation scars, fortunately cutting it short. He spends far more time, inexplicably, helping to teach his new friend how to quack like a duck.

A few frames later Eddie has fallen for the boss’s daughter, mistaking her love interest for her father’s assistant Steve (Paul Page) to be meant for himself. And in interviewing some of the women servers, he is served back his patronizing comments—“You don’t drink. You don’t smoke. You don’t stay out late at night? You’re a nice girl”—with the girl asking the same questions of him, and coming to very same conclusion, “You’re a nice girl too.”

Halfway into the movie for utterly no logical reason Cantor, as Eddie Simpson, appears in blackface—a racist habit I wish he might have been able to overcome—and by the film’s third quarter he’s reduced to drag in order to get enough laughs to counter the terrible acting and illogical plot contrivances of Yolando and his henchman. Interestingly enough it’s George Raft’s threats that encourages him to shift genders, the same influence he had on Jack Lemmon and Tony Curtis in Some Like It Hot 28 years later.

There’s a great deal of running about to find the money Eddie has taken from Clark’s safe and baked into bread for safekeeping, and the mistaken belief that his marriage to Clark’s daughter is about to be announced at a party everyone in the film is required to attend; but all ends just as it should, the money is found in the first loaf he breaks open, Joan becomes Steve’s fiancée, and Eddie discovers, after all, that he really loves Helen Martin, as they quack happily into marital bliss. 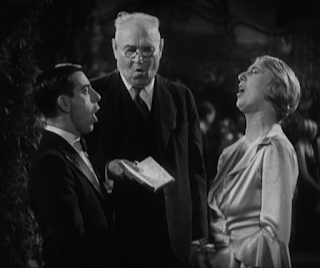 Strangely, for its utter balminess, Palmy Days isn’t the worst hour you might spend at the movies. And, as Barrios suggests, in this film you at least know that gay boys and lesbians live in the same surreal universe in which such a concept of nice girls still exists.