Although Alfred Schirokauer’s Heaven on Earth is apparently still available, and was recently restored and shown for competition in the Berlin Film Festival Teddy Awards, this 97 minute silent film has not quickly made its way to the US; at least I was unable to find a copy to view.

The story however is fairly transparent. Petty politician Traugott Bellmann (played by the co-writer Schünzel) is a strong critic of the moral decline of society in general, and, in particular, the local notorious nightclub “Heaven on Earth.” On the day in which the film takes place, which happens also to be his wedding day, he is appointed the president of the Moral Decency League.

The same day he receives an inheritance from his deceased stepbrother, along with the very nightclub which he has taken on as the representation of societal evil. Not only does he now own the club but is promised a sizeable sum of money if he spends every night from 10:00 to 3:00 a.m. in the morning in his newly acquired “den of iniquity.” 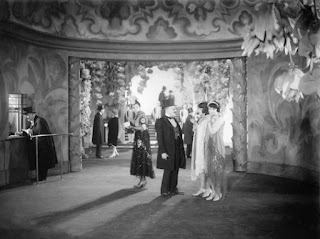 Suddenly his is forced to escape his seemingly endless wedding reception, deposit his new bride in their bedroom without so much as a kiss, and rush off to “Heaven” to keep the required deadline. Over the next few days, he must sustain his new “shame” in secret, keeping any evidence of involvement from both his bride and his reformer friends who keep calling at his flat in between visits from the club’s hot Negro jazz band, a bevy of Ziegfeld-like showgirls, and a performing monkey.

Despite the film’s representation of the art deco designed club filled with the kind of faces that populate the art of the Weimar painters such as George Groz and Max Beckmann, the members of the club are apparently mostly heterosexual and the club’s activities are relatively innocent compared with the legendary general Weimar goings-on.

The film’s LGBTQ credentials are centered primarily around Bellmann’s attempt to escape being seen in the club. To succeed he is forced—somewhat like the politician in Édouard Molinaro’s La Cage aux Folles (1978)—to dress in drag, during which he is continually propositioned by his lascivious father-in-law who is also the head of a major liquor distillery. One commentator describes Schünzel as “a chic female impersonator” in a film that functions as “a jazz age gender bend.”

The film’s actors, other than Schünzel, include Charlotte Ander, Adele Sandrock, and Otto Wallburg.

Posted by greenintegerblog at 5:47 AM