waste not, want not

One of the most charming and unexpected of films that involve LGBTQ behavior is Polish director Andrzej Wajda’s early experimental short from 1968, Przekładaniec, translated as Roly Poly or Layer Cake.

By this time Wajda had already made major commercial films and would go on to direct in the 1970s his far more naturalistically based testimonies to Polish history. But in 1967 his great thespian discovery who performed in masterwork Ashes and Diamonds (1958), Zbigniew Cybulski—generally described as the James Dean of Polish cinema—was killed in a train accident. Wajda’s reaction was immediate and profound, almost a detour from the direction most of his films of the 1970s would take. His general grief was first expressed in his very personal work, Wszystko na sprzedaż (Everything for Sale) of 1968 which, for Poles read as an homage to Cybulski, concerning a director who attempts to make a movie with a young rising star, very much like Cybulski, who never shows up for filming.

Wajda’s next work, Hunting Flies was a highly ironic satire, as was Roly Poly, the 34 minute short produced on Polish television based on a story “Czy Pan istnieje, Mr. Jones,” by Stanisław Lem. In fact, Lem wrote the screenplay for this film, and long after testified that he felt it was the most successful of film adaptations of his work.

In this short Lem and Wajda explore a world in which individuals themselves become amalgamated pieces of other beings in much the same way reconstructed and retooled autos and other home-constructed gadgets often were. But in this case it is part of the socialist society, in which one shares with all, or vice versa, the science of transplanting human parts being taken to a new level by an almost rock star-like Doctor Burton (Jerzy Zelnik). 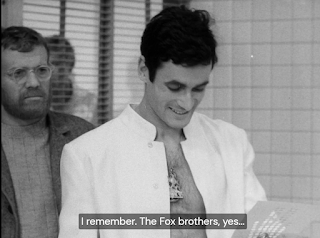 The film begins with the rather hyena-like giggling sports car driver, declaring himself much like Steve Martin and Dan Aykroyd in “Two Wild and Crazy Guys” to be a “bunch of loonies,” Richard Fox (Bogumił Kobiela) who suits up with his brother Thomas (Marek Kobiela) to speed off from Thomas’ wife (Anna Prucnal) and child on a rally which they are assured to win. Somewhere along the way, however, their car crashes, killing Thomas. But no matter for Richard, who survives, most of his brother’s bodies being implanted within Richard’s frame, including evidently the man’s penis.

He recovers and the stitches are finally removed, but finds that the insurance policy his brother has long ago purchased, which upon his death leaves half of his estate to his wife and the other half to his brother, has not been paid.

Richard hires a lawyer (Ryszard Filipski) to look into the matter, who in turn discovers that since 46% of Thomas’ body parts continue to live on in the form of his brother he is not officially dead. Yes, he has died, and his wife is a widow, but not “actually” so since Richard carries much of his brother’s body within him alive. Indeed, although he is his brother’s kid’s uncle he is, legally put, he is also still its progenitor since he now bears his brother’s penis. And although he cannot legally marry Thomas’ widow, since the husband is formally not yet dead, he is now responsible for the woman who cannot describe herself as fully widowed.

The ridiculous exceptions go on and on as if in some absurd version of the Monty Python show. But, in sum, Richard having run out of money without the insurance payment, is now being sued by his sister-in-law, and cannot pay his lawyer.

He has no choice, accordingly, but enter another sports car rally, sure to win the 100,000 that this one offers to the winner. He hires a new driver, who he admits is quite handsome, and again is seen off by his sister-in-law who wishes him good luck with hopes that he will pay her support.

Once again, the race begins well, but eventually Richard and his new partner crash, this time into individuals in the crowd, a woman Salomea Tintel and a man with a dog on his leash, who are killed in the crash. Once more Richard Fox is saved with the brilliant intervention of Dr. Burton who implants much of Salomea, the man with the dog, and even the dog itself into Richard’s body. 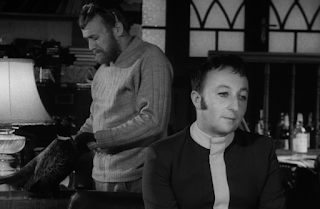 This time when the sports car driver shows up to the lawyer, there are several litigants, including Salomea’s fiancé, a dentist who has implanted her teeth with gold crowns as a gift he now wants back. Moreover, the man who was Richard now looks far more like a woman, attired in a dress and sporting breasts. Speaking and behaving far more effeminately than previously, he describes himself as a man who in the inside feels more like a woman—a phrase which today reminds of the many transgender males who transition to the female gender. He ends the scene by pulling out a powder puff and mirror to fix himself up. We now understand why he has described as his new driver as “rather handsome.”

And suddenly an earlier scene in which several people were waiting outside the hospital, a couple of them male crossdressers and others trying to sell their own body parts, makes sense.  Clearly these folk, former patients of Dr. Burton no longer need certain things, like a penis, or another man with apparently three sets of eyes. Like Richard Fox, they surely now need the money. And the ghoulish scene cannot help but remind us, in turn, of Stephen Frears’ 2002 film Dirty Pretty Things about immigrants who offer up their body parts and sex acts to pay for passports and jobs. 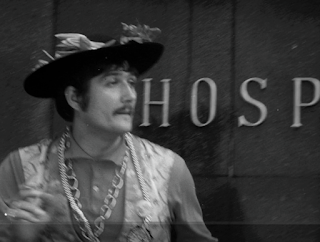 Confused by his client’s multiple changes, the lawyer visits Richard’ psychoanalyst—surely a necessary being with Richard’s now multi-existing identities—who puts him through a series of association tests consisting of sexually-suggestive words which the patient has previously compared only with multiple auto parts and now associates with mainly menopausal women’s problems. When the psychoanalyst pushes him too far, he growls and begins to bite him, obviously effects of the small element of his being made up from the dog. The psychoanalyst asks the lawyer whether he thinks he ought get vaccinated, the lawyer incredulously asking, “Do you think Fox has rabies?” he responding, “Not Fox, the dog.”

Now more than ever, however, Richard needs one last race to bail him out of his multiple debts. In the last scene his “rather handsome” co-driver shows up at lawyer’s office, having been referred to him by Richard, he having been saved from yet another crash with his driver’s amalgamated body parts.

In a world in which we blithely replace our livers, kidneys, hearts, and other vital parts with those of others in order to survive, is it any wonder that we might define ourselves as a collective, not only of male and female individuals, but of individuals who no longer need distinguish between gender but can’t forget the bodies in which they functioned?

Posted by greenintegerblog at 12:59 PM