Let me begin my discussion of Ed Wood’s 1953 film Glen or Glenda by asserting that it is not in any way, as Richard Barrios and many others have described it, “funny.” Because of its atrociously bad script and acting, it is certainly, at moments, laughable, something that might make one even giggle while rolling his or her eyes. But Wood’s work is utterly serious in subject and intent, and to describe it as merely “funny” is to miss the occasion of seriously discussing one of the very first US films to actually attempt to tackle of the subject of transvestitism and transgender sexual orientation—two very different issues—both.

Neither is this a work consist of what might be described as a “camp” sensibility. There is no irony in Wood’s narrative about the heterosexual man, Glen (Ed Wood) who loves to wear women’s clothing. Camp depends upon portraying or saying something that we know to be an overstatement or an outrageous presentation of a real situation. Camp winks at its audience, asking for its conspiracy in pretending to be serious while it satirizes or exaggeratedly portrays events. At the heart of camp is an agreed upon disbelief, a lie which when blown out of all proportion reveals a truth or several related issues surrounding it. Camp is artifice performed for the love of theater, not an attempt to explore or study what we believe to be real—although it certainly might poke at truth or reveal its buried remnants. Tim Burton’s wonderful film based on the life and career of Ed Wood is filled with camp incidents and imbued with camp sensibility. But Wood’s own work, particularly Glen or Glenda, is the director’s attempt to speak as honesty as he can, even if in so doing he reveals his naivete and outright ignorance and, most appallingly, his complete lack of rhetorical and dramatic writing talents. 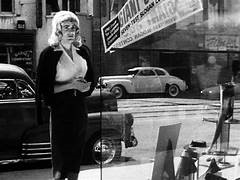 As Danny Peary argues in Cult Movies 3, Glen or Glenda is truly radical, despite its utter ineptness, a personal revelation that far more revelatory and important to the society as a whole than exists in many of the most respected auteurs’ films. Although it is difficult to keep a straight face while Glen as Glenda strolls up and down the Los Angeles boulevards in her beloved angora sweater, he’s telling you a story that the narrational structure demands you attend to as a “truthful telling,” as the early credits shout. Unlike most films which provide a disclaimer that their story has anything to do with real life, Wood’s film declares the opposite from the very start. This is a true story that its viewer need to attend to. The people you are about to see are real human beings who suffer from being rejected by those they love and arrested by the authorities for something they feel is utterly out of their control.

Contrary to the film’s refusal to disclaim its association from true life experiences, I must begin with a disclaimer, admitting that I am no first-hand experience about subjects I am about to discuss. As a cis- gender homosexual, I have never suffered any of the obsessions or bodily dysphoria that Wood’s characters express. I have no psychological education, although I feel I am fairly perceptive when it comes to some forms of what has been long described as “sexually deviant behavior.” Certainly by watching the thousands of films I have and written about them as intelligently as I’m able I have learned a great deal about various aspects of LGBTQ behavior. But my evaluation of Wood’s psychologist Dr. Alton’s (Timothy Farrell) explanations for his various character’s behavior consists mere speculation. It appears to me that when it comes to an individual’s relationship to gender, we still have a great deal to learn. 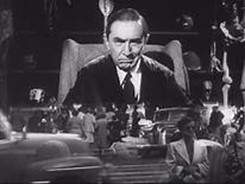 But before we can get to the real substance of this film, we perhaps must trim away the truly absurd melodramatic flourishes which Wood added to his movie, apparently to provide the serious narrative at its heart with cinema-world credence through the mad fatalistic gesturing of actor Bella Lugosi as the embodiment of the scientific spirit. Some of the very worst scripted lines ever put to paper are his ramblings about how the masses are controlled by forces outside of themselves, Lugosi shouting “Pull the strings! Pull the strings!” Actually the cinematic montage accompanying these words and others of their kind with views of crowded streets overlaid by the images of a superior force are rather fascinating cinematically. And, as bad as the Lugosi scenes are, they are utterly fascinating from a film history point of view simply because they reveal a once great actor at the nadir of his career, a now near-forgotten drug addict grasping on to the last moments of his long film career. And in Wood’s following movie, Plan 9 from Outer Space, we catch some sad glimpse’s of that great actor’s early powers.

But clearly the film would have been better without it, although that almost seems like haggling over what the very worst moments of this film represent. We might easily point to the “love scenes” between Wood and his girlfriend, Barbara (Dolores Fuller) which verge on producing guffaws. Both are such bad actors that we almost feel they deserve one another, although we can only feel sorry for her complete ignorance of Glen’s aberrations, and criticize him—despite the director’s endless justifications for his fears through his tableaux portraying her possible reactions and his dream sequences as he imagines some of the many sexual variances of human behavior, including sado-masochistic relationships (a man whips a woman, and later a woman joins another woman undergoing a kind of masturbatory fantasy and whips her), the representation of women of “loose morals,” and in one horrific tableau a dramatization of rape—for delaying his version of “coming out.”

If, at first we perceive these melodramatic intervals like some insanely bad director’s notions of Sodom and Gomorrah, we suddenly recognize that is precisely what they are. Wood is playing out his psychological renditions of the horrors of sexual aberration in an attempt to fit his own “difference” within the grander scale of things. Like a young boy trying to evaluate his sudden urges to masturbate within his conceptions of the worst of human sexual behavior, Wood attempts to create a sort of graduate scale of sexual perversions wherein his wearing of women’s panties and sweaters appears to be a puny sin in comparison with the worst tendencies of human sexual abnormalities. Indeed earlier in the film, the narrator attempts to almost dismiss the entire notion of transvestism by trying to convince us that women’s attire is simply more comfortable and accommodating to the human body than are the rough fabrics of men’s pants, shirts, and ties. What role Glen’s desires to also put on makeup, dress in women’s heels, and adorn himself with other clearly more complex items of a woman’s boudoir plays in all of this isn’t quite explained. Evidently, he goes full “court” only when he gets the urge to express himself in public, primarily window shopping and pining for the items that are difficult for him to purchase as a man. 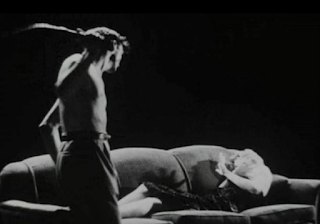 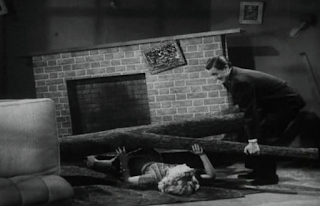 If the sets for these dream-tableaux seem like something cooked up by a small city TV station to represent the dangers of local tornadoes, the very fact that Wood’s film brought into discussion such a wide range of sexual activity in 1953 is quite astounding. Obviously, by 1953 we’d see far too many portrayals of women trollops and even been presented with symbolic depictions of heterosexual rape; but although we may see hints of it in the Australian film Rangle River (1936) and Genet’s Un chant d’amor (1950),  I can’t think of a single previous on-screen depiction of S&M in commercial filmmaking. And the dozens images of Ed and his friend Johnny (Charlie Crafts) in women’s clothing is surely the longest on-screen time devoted to transvestism.

But the true focus of the film is not about Glen’s confession to his fiancée of his secret self, Glenda, but the visit the understandably confused but truly interested Inspector Warren (Lyle Talbot) makes to Dr. Alton’s office who attempts to explain not only Glen’s transvestic tendencies but the far more complex issue of transgender identification and reassignment.

Alton at least begins with a seemingly commonsense evaluation, that when it comes to gender issues each individual case is different. So at least he does not attempt to make grand generalizations in this film. It would seem that in explaining the desire to wear women’s clothing is prescribed far too often in his telling as a psychological condition rather than any possible genetic or aspect of body chemistry. One has to remember, after all, that the profession in 1953 was still very much shaped by Freudian psychological thought and Freud identified homosexuality itself as relating to the mother complex. He diagnoses Glen’s problem as related to a lack of love from his mother which gets played out in his desire for the attention of women in general, leading in turn to his own identification with the female sex. And his wife Barbara is told that she can help him with this by replacing the lack of love with her own. By film’s end we are told that Glen has been cured.

I can think of numerous reasons why males might be attracted to wearing women’s attire having absolutely little to do with their relationships with their mother, many just for the fun of it, for the identification with sexual difference that dressing up as the opposite sex provides. And, of course, one doesn’t at all have to see it was something necessarily in need of a “cure”—although such behavior still is found highly disconcerting to most straight and gay males and females, who accordingly demand some explanation for such behavior.

What I find more disturbing however, is the easy slide the movie doctor makes from transvestism into transgender desire. Even the film makes clear the two are necessarily related. Glen is evidently a cis heterosexual who simply enjoys the feel and thrill of wearing women’s clothes. But Dr. Alton immediately provides his curious-minded listener with two examples of transgender individuals, both of them related to hermaphrodism, one full hermaphrodism (with the organs of both sexes on the outside of the body) and a second concerning pseudo hermaphrodism (with some of the organs of the opposite sex inside the body), in the second instance, the documented male raised as a female and desiring to become a woman, a process through which through hormonal shots Alan successfully becomes Anne. Today, I believe, most of the men and women desiring to change their sex are neither hermaphrodites nor merely psychologically driven to make that significant change, but describe a more profound sense of gender identification which does not align with their sex at the time of their birth. So this film’s “answers” to the reasons for such gender changes do not fully explore the vast territory that is still often inexplicable to us today.

Yet you have to give credit to Wood’s film for opening up that discussion, and for its narrator’s advocating an acceptance of these and other sexual differences that during that same period put many in jail, ruined their careers, and broke up their relationships. 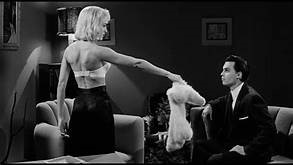 In Glen’s case, even Barbara eventually accepts his transvestic pleasures, offering up her favorite angora sweater for his personal delectation. But in an earlier film cut, still shown in the theatrical trailer, Barbara hands over her angora sweater, tossing it to Glen in a huff.

I haven’t read the complete biography of Ed Wood, but from Burton’s film Ed Wood it appears that he was not at all “cured” of his enjoyment of women’s attire, and in fact increased the time he spent with homosexuals and other sexual “deviants” as he worked to make his second film.