rabbit holes in the texas prairie

John Wayne was 27 years of age when he starred as the lanky and affable ex-college boy returned home to his childhood Texas ranch in Robert N. Bradbury’s 1934 film The Lucky Texan. Wayne had already played in hundreds of roles large and small, but this was still a grade B movie, and it wouldn’t be until 1939 in Stagecoach that the western star would move up to grade A films, that film in particular leading to his later career.

In most respects this film was saddled with a rather predictable plot: a man, Jerry Mason, returns home to find his friend being cheated out of his ranch and, soon after, a prospecting claim—the story central also to his later 1930 and 1942 film The Spoilers (Wayne appearing in both versions), the earlier silent version of which was brilliantly satirized in Ralph Cedar’s 1923 LGBTQ short, The Soilers—before eventually attempting to murder the man, Jake “Grandy” Benson (played by the later regular friend to many western heroes, George “Gabby” Hayes). Evidently Jerry’s father’s last wish was that his son return home to live with his closest friend Grandy, presumably to work with Grandy on the ranch and blacksmith shop. What precisely Jerry’s father’s relations was to Grandy is never established, but obviously they worked and lived together on the same ranch where Jerry grew up.* 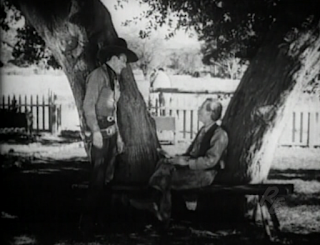 This is the kind of story that has a great many rabbit holes strewn throughout it that clearly author/director Bradbury has no desire for his audience to look into too carefully.

For example, why has Grandy never caught on that his missing cattle—mostly rustled we later discover by the villain of this piece Harris (Lloyd Whitlock)—might have a connection to the town’s greedy local assayer. Or, soon after, what has the villainous, heavy gambling son of the town’s sheriff, Eddie Parker, done that’s so awful that if the man who threatens him dares to let the truth be known to the townspeople it would bring down the career of his fair-minded, well-loved father Sheriff Miller (Earl Swire). The film encourages us to cover over the hole with the probability that he is simply in debt for thousands of dollars, but it’s hard to believe that the son’s financial affairs would destroy the father, since certainly he must owe nearly everyone in town, and most know that the jobless, shifty boy is an embarrassment to Miller.

The plot returns to the predictable, however, when Grandy announces that his niece Betty Benson (Barbara Sheldon)—who’s also been “out East,” in this case Cedar Rapids, Iowa, finishing her education—is about to return to live with, cook, and clean the old man’s house. Although even here, we have to wonder why a young beauty like Betty would choose to live out her live in such a Podunk town joyfully caring for an old uncle. We can excuse this conundrum by recognizing that her sole purpose is merely to provide Wayne’s character, Jerry Mason, with a romantic interest—although we never see them speak but a few words together—who he can marry before the editors role the film’s credits. 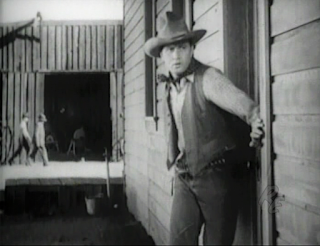 In any event, each of the town’s primary villains’ intentions are clear: first Eddie who steals the money Grandy has paid to the banker Williams (Gordon De Main) to close out his debt on the blacksmith shop; and then Harris, who not only tricks Grandy into signing away the rights to the ranch but, in attempting to track down Grandy and Jerry’s gold nugget-producing claim, attempts to shoot him dead. They want money.

In the first instance Grandy is accused of nearly killing the banker, and the second Jerry is perceived as guilty in Grandy’s murder, which gives both Wayne and Hayes an opportunity to save one another and demonstrate their mettle.

With the talents of legendary stunt man, Yakima Canutt, playing Harris’ equally evil associate Joe Cole, Jerry wrestles Eddie to the ground and beats him up in the kind of dirty fights which Wayne and Canutt made famous,** as well as leaping upon the backs of horses and racing across the country—in one notable case in this film Wayne (doubled by Canutt) grabbing a large tree branch and riding it like a witch on her broomstick down a constructed river wash in order to catch Eddie who’s escaped his previous attempt to unseat him from his horse. 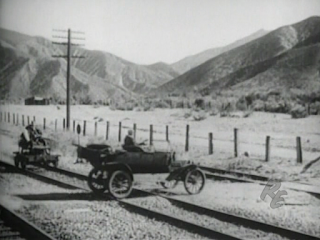 In the last grand scene of this film, director and writer Bradbury brilliantly brings the 19th and 20th western chase scenes together by having Wayne chase after Harris and Joe on horseback, while the evil duo shift to an electrified railroad inspection cart at the very same moment that Grandy chases after them by auto, at one point the stuntman Canutt chasing and narrowly missing crashing into himself!

The film also allows Canutt another amazing demonstration of his talents by attempting to tame Grandy’s bucking mule, which even he cannot bring  into complete control; as well as providing the town mutt, adopted by Grandy and Jerry for pointing out the first gold nugget, to pretend he’s Lassie by running back to town to let Jerry know that Grandy’s in serious trouble, having just been thrown from his horse at the moment when Harris and Joe presumed they shot him in the back.

All Jerry has to do to free Grandy from jail is to beat up Eddie enough that he admits his dreadful deeds, at which point his poor father is forced to send him off to trial and prison. But in order to save Jerry from hanging for having killed Grandy, the secretly surviving Grandy decides to disguise himself, attend the trial, and point out the men to the whole town who cheated and tried to kill him.

Nothing that I’ve described so far provides any reason whatsoever to discuss this movie as having anything to do with a study of queer cinema. And even if Gabby Hayes, without his scruffy beard or the walrus-like mustache he sports in this western, were to simply show up in the costume he chooses, dressed like a woman, The Lucky Texan might only be worth discussing as yet another example of the 20th Century’s fascination with cinematic cross-dressing.

But here we’ve discovered yet another inexplicable rabbit hole and this one is worth burrowing down into for just a little. First of all, there is absolutely no logical reason why in order to free his young pardner Jerry and to name his would-be killers Grandy need attend a trial in disguise. He could just as easily have gathered a few townsmen and women around him and told his story to the Sherriff; his very existence would prove that Jerry hadn’t killed him and his testimony would be enough to convict Harris and Joe Cole, particularly since they were the ones who reported him dead.

Yet, Grandy not only decides to dress as a woman, but finds that dress in an old truck he’s saved all these years as a treasure of his acting days (don’t most Western back-up men like Walter Brennan, Andy Devine, and Gabby have such pasts?) when he performed in drag in a production of that noted campy work—long before anyone knew how to describe it—Charley’s Aunt, the “Gay Nineties” hit that went on to be revived in several film versions discussed in these volumes in which the central figure is convinced to dress up in drag to successfully woo a wealthy suitor. Not only does Grandy still have his original dress, hat, wig, and shoes, but, just as mysteriously, has kept locked in that old truck “the thing that made Anna Held and Lillian Russell famous”—an item that Jerry cannot even imagine where to put on the female frame: a beaded G-string. Why, any curious mind has to ask, has he saved that or, perhaps even more interestingly, why does he possess it? I don’t think he might have needed that to portray Charley’s Aunt. Evidently, he enjoyed performing in other drag roles as well. 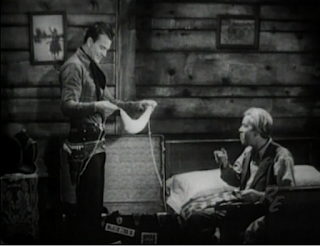 If nothing else, it’s clear that old Grandy has been just waiting for an opportunity to show off to the entire community his long ago thespian skills. Did Jerry’s father know about his pardner’s secret talents? Surely, over all those years of running a cattle ranch together, Grandy must have opened up his version of Pandora’s box to his old friend, perhaps even demonstrated some of his old tricks? 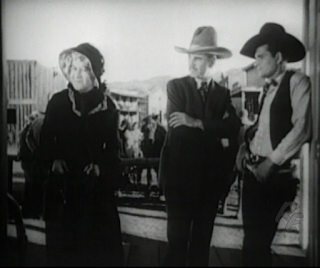 And I still want to know what that out-of-work son of the Sherriff might have been providing the local boys all this while to help pay off his numerous loans? But that’s the wrong rabbit hole? Bradbury has provided us a far more commodious view of the mirror world of sweet old Grandy. And Gabby Hayes in drag, I have to say, isn’t half bad until his dress slips off, revealing him in his underpants, the judge demanding that he put his dress back on!

In the end, one has to admit that The Lucky Texan ain’t no straight-out Western.

*The Wikipedia entry for the film posits that Grandy is Jerry Mason’s uncle, although it’s never established the film’s dialogue that I could catch, and if so would mean that Betty and Jerry are cousins.

**Prior to Wayne and Canutt’s film appearances, the hero of westerns was forced always to fight fairly, but the duo introduced far more believable battles in which the hero fought in any way possible to save the day, acting as “if he truly meant it,” instead of simply symbolizing the struggle for good or evil.

Posted by greenintegerblog at 12:48 PM