what it means to be gay

Hansi Mandoki, Petter Vennerød and Svend Wam (screenplay, based on a novel by Per Knutsen), Svend Wam (director) Sebastian (När alla vet) (When Everyone Knows) / 1995

Sebastian (Hampus Björck), a 16-year-old student is going through the psychological and hormonal changes of every young man and woman of his age, suffering from inexplicable spurts of excess bodily animation and vivacity which leads to him and his male friends to grab hold of one another, hitting and wrestling whenever they meet as well as experiencing bouts of violence which he cannot control. But it’s worse than that; something else is clearly bothering him. Basically a nice boy, somedays Sebastian ponders robbing small businesses; at one point he steals a bicycle and drives it into the fjord, only to pull it out by rope and return it to the spot from which he has taken it; another time while Sebastian’s parents are out for the evening, he and his best friend Ulf (Nicolai Cleve Broch) trash his own house, participating in a mad waffle-making fracas and a bathroom tub water fight that spills over onto the floor, mirrors, cabinets, etc., all of which he makes no attempt to clean up.

With friends he is often loving and caring, but the next minute he goes out of his way to evade them. A formerly talkative son, he now refuses to discuss anything with his parents (Ewa Fröling and Helge Jordal) and particularly becomes irritated when they bother to ask him about any problems he may be facing, whereupon he leaves the room or the house. 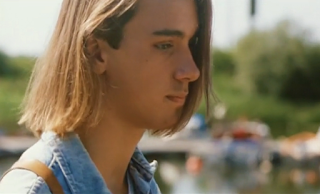 In fact, his parents are open-minded and loving, his best friend Ulf (Nicolai Cleve Broch)— suffering from an alcoholic father and a hard-working mother—spends much of his life caring for his two young sisters, and when he mother is ill even substitutes for her janitorial duties; his other friends become animated and show their joy, moving forward to greet and kiss him, whenever the shows up for their nightly meetings on the street of the small Swedish town where they live. The handsome, long-haired, and lanky teenager Sebastien is doing well in school. So what, other than suffering through teenage confusion and angst, is his problem? That question, in fact, is the central concern of Svend Wam’s 1995 film. 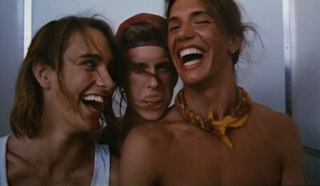 Obviously, anyone reading this essay in a book on Queer Cinema will immediately realize that my questions are somewhat rhetorical, that Sebastian’s central problem is that he suspects that he is gay and is highly attracted to Ulf, whose sexuality is not so apparent. But even then we have to ask why is Sebastian having such a difficulty coming out? Although it is always dangerous  to generalize about an entire country, most people perceive that Sweden and other Scandinavian countries by the mid-1990s were some of the most open-minded of all places on earth about sexuality. And when he finally does admit the fact to his parents, his mother cries for a few moments while his father sits temporarily speechless, but soon after they both openly accept his homosexuality with open and loving arms, suggesting that should all celebrate. One of his friends, also in love Ulf, Lisbeth (Rebecka Hemse) even suspects that he is gay. And when his friends finally all discover the fact—hence the film’s alternative title, När alla vet (When Everybody Knows)—they appear to be completely comfortable with the fact.

Indeed Wam’s film was criticized upon its original release as escapist gay youth fare that refused to address deeper issues. I’m not exactly sure what those issues might entail. Certainly the film might have introduced a homophobic being, one of his parents or his friends, and it might   have further focused on the abuse of Ulf by both his father, who beats his wife and son upon his returns home, and his often negligent mother. The fact that the brother and, in one instance, Sebastian himself, are asked to babysit two young girls raises issues that might have been further explored.

But that is not obviously the world the writers or directors have created. In both Sebastian’s and Ulf’s cases this cinematic work presents youths who represent the incredible resilience of most young people. The problems that these boys face are ones that they have to handle internally, and every being does that in a slightly different way. It is quite evident that Ulf is simply more mature than Sebastian and has not only come to terms with his extra-familial responsibilities, but enjoys nurturing his two charming sisters in a situation that might otherwise have destroyed their childish joy. We find out late in the film, that he has already experimented with gay sex, discovering that it was not for him. 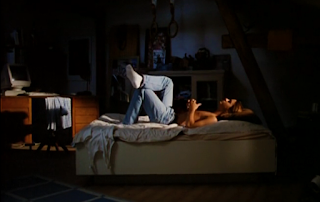 This film is not, fortunately, yet another statement about the general angst and joys of coming out, but is a  more detailed character study in how one individual, despite all of the good intentions of those around him, has himself to “come through,” to deal with his own sexuality in a manner that, ironically, may be even more problematic than for a hateful homophobic to share a shower or a dorm room with a gay schoolmate. The mind sets up barriers and probabilities that the world sometimes has not established. We can see in Sebastian’s behavior some of the torturous questioning that many young, self-closeted youths suffer. The first and most frightful fear is simply that in suddenly recognizing that one may be attracted to and desire sex with others of one’s gender, how one will behave, what will such a life look like? My companion was afraid that by being gay he would suddenly turn into a grotesquely effeminate being the way homosexuals in his day were often depicted by society and in the media. Does being gay mean that you want to be a woman? That you perform the role of a woman, or begin to perform feminine gestures and behavior? 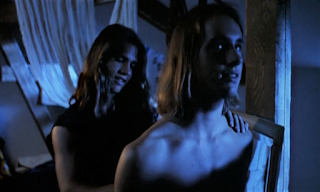 With his friend Ulf, Sebastian actually explores this territory, as the two inexplicably get an urge to apply make-up, lipstick, and eye-liner in exploration of the possible feminine aspects of their beings and, strangely, a kind of exploration that children perform with Indian war-paint and cowboy masks. It is also a bit like “dressing up,” preening for one another, becoming beautiful in the context of the heterosexual gaze. From there they graduate to drawing “tattoo” like-figures on each other’s stomachs and backs—allowing them also to explore one another’s bodies without literal sexual contact. But of course even painting or drawing upon actual flesh and muscle does become sexual, as they join in a kind of celebratory rock/war dance in connection with their new kinship.

The chaos that bookends these psycho-sexual enactments, in part, is an attempt to rid themselves of the guilt of exploring that territory, countering their feelings of attraction to one another through gluttony, smearing jelly across their faces; and, later, wiping away the memory of trying to become artificially “beautiful” for one another in the most sexual act of all, by sharing a bathtub completely naked. 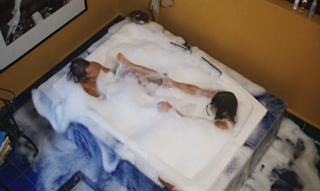 The pushes and pulls of attraction and disgust they explore naturally results in Sebastian’s final kiss of Ulf on the lips And when it is not greeted as either something of a joke or received with pleasure, the self-hate and confusion Sebastian feels returns full force. 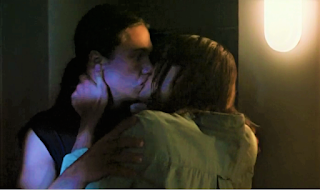 And so to do the other questions that young gay boys face rush to the surface. How does one go about finding someone to love? Where are other people like him who also desire someone of his sex and might find him attractive?

Finally, how does a homosexual make love? Heterosexual love, advertised daily through magazines, film, television, and even advertisements pretends to lay out the proper approaches of male and female sex and love. But where does a boy coming to terms with homosexuality find explanations of what two males (or for women what two females) do together to enjoy each other and express their pleasure, information that, without the help of today’s computers and pornography, might not be as readily available for someone living, as Sebastian describes his town, in Podunk.

It is these issues and others like them floating through Sebastian’s unexpressed consciousness that is the focus of Wam’s probing film. It is truly sweet that once he has openly expressed his desires through his attempted kiss that everyone accepts him, demonstrates their love for him, and, in Ulf’s case, holds no hard feelings for being the object of his friend’s affections. It’s great that “everybody knows.” But the question when the film comes to his sunny ending is when and how will Sebastian know what and who he is really is as a gay individual—a territory that lies outside of the experiences of a 16-year-old boy living in a small Swedish town.

Posted by greenintegerblog at 12:31 PM