Although I review Fred. J. Balshofer’s The Isle of  Love (1921) starring the noted cross-dresser Julian Eltinge, his earlier films, some of them still apparently available, are difficult to obtain, and apparently impossible to purchase on DVD. It appears that TCM may have some of his works from the late teens of the early 20th century, but they obviously don’t show these silent works regularly or upon request.

Accordingly, I am left with no other alternative but to provide as detailed description and analysis as I can for several of his unobtainable film without having seen the films themselves.

Regarding their value to the LGBTQ community, however, the focus is simply on how convincingly Eltinge plays the female for which a various number of reasons, depending on the different films’ plots, the transformation is demanded of him. Usually he is quite successful and is able to bring justice to bear and return order to a society that is filled with bullies and those who have gotten in the way of fair play, a sort of “superman” for the weak male who has no other recourse to normative justice, but instead of dressing up as caped man in tights, Eltinge puts a dress over the tights and drapes the cape over his female attire.

William C. DeMille’s 1918 film The Widow’s Might is a typical example. DeMille, the older brother of Cecil, and his writer Marion Fairfax have whipped a typical “city boy” gone West situation, usually reserved for males who are a bit too sissified to survive their new environment. In this case Dick Tavish, a young New Yorker, is convinced that he can become wealthy by raising cattle, and accordingly buys a western ranch, which at first is someone pleasurable and rife with comic possibilities; but soon it becomes so boring that he can longer bear the conditions which he must suffer. 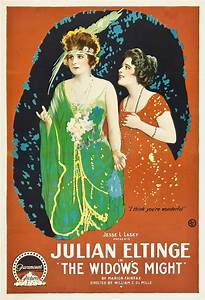 Soon, however, he finds love, in this case with the girl in the kitchen calendar, who intrigues him, particularly when he discovers the girl is real and lives nearby. No matter that her uncle was the one who swindled him over his purchase the ranch. He can take of that. Besides, other local ranchers also discover that the girl’s uncle, Horace Hammer (Gustave Von Seyfferitz) has swindled them as well, and they chose Dick and his friend Red (James Neill) to get their money back.

Dick takes on the challenge if for no other reason but to be close to Irene Stuart (Florence Vidor), but when he takes the matter up with Hammer threatening him with action, he simply laughs at the weak city boy. The young man determines to check out Hammer’s safe to regain the swindled money, but Hammer interrupts his activities and he’s forced to go on the run.

In order to return, he must disguise himself—and all those in the audience who knew of Eltinge’s fame were surely waiting for this moment—masquerading as a woman, half of the men in a fashionable resort falling instantly in love with him. As a beautiful widow he rights the situation and wins Irene’s hand in marriage.

Posted by greenintegerblog at 6:06 PM