It might be easiest to describe Claude Chabrol’s 1962 film The Third Lover (L'Œil du malin) as a work that centers upon a kind of sexless ménage-à-trois in which a young Frenchman, Albin Mercier (Jacques Charrier), entering into the lives of the famed German novelist Andréas Hartmann (Walter Reyer) and his French born wife, Hélène (Stéphane Audran), falls in love with Hélène, becomes jealous of Andréas, and--discovering that his friend’s wife is having an affair with another man--reveals her betrayal to Andréas and his knowledge of her love affair to her, resulting in Andréas’ Othello-like murder of Hélène. In some respects, reading the film in this manner, you might even argue the Chabrol’s 1962 film has a great deal in common with Truffaut’s Jules and Jim of the same year, particularly since that ménage-à-trois also involving a French-German alignment among the three, similarly ends in death. 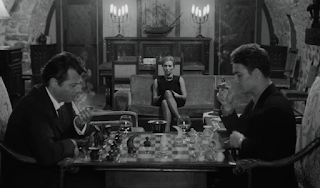 Indeed, a number of commentators have simply left it there, although admitting that if the threesome in Chabrol’s work is “sexual” it does not truly involve one of its figures in actual sex with either the male or female other. And in that sense, it is often spoken of as a more psychologically abstract work as they align it also with Patricia Highsmith’s writing as it influences René Clément’s Plein Soleil (Purple Noon) and Alfred Hitchcock’s Strangers on a Train. Indeed, in his intelligent review of the new Kino Lorber issue of The Third Lover Gary Tooze describes it as a work lying between the poles of Purple Noon and Hitchcock’s Vertigo. After all, Albin’s (real name Andre) voyeurism, like Mr. Ripley's leads him to not so much as “desire” Hélène, but envy every aspect of Andréas’s life, as he amorally plots throughout the work on just how to grab hold of it, mostly through the agent of his fellow French-speaking interpreter. Like Ripley, finally, Albin is a master of mendacity, an art he began practicing quite early on, he admits, simply to please his loving mother.

And speaking of boys and their mothers, James Travers in an equally provocative essay, puts Chabrol’s child-like hero in the same room with Hitchcock’s Norman Bates, writing:

“Things are never quite what they seem,” is he phrase that most aptly

setting, inhabited by what appears to be the model married couple, is

just beneath the surface. The perfect world that [Albin] Mercier sees

and grows to envy is just an illusion, a mirage that is largely his own

creation. When he succeeds in entering this world, what the journalist

finds is sordid imperfection that he cannot endure, so, like an artist

confronted with his own failure, he must tear up the canvas, destroy

his false value of paradise. Mercier is like a pathetic child who

smashes a mirror because he cannot stand the sight of his own reflection.

Like Norman Bates, he is trapped in a bubble of self-loathing, forever

alienated from the world around him by his vigorously repressed

sexuality and contempt for other’s happiness.

I am not certain that any LGBTQ person might want to “claim” Albin Mercier—or Norman Bates for that matter, although I have chosen to write on him in these pages—and as I will mention yet again, I have no degree in psychology, but it does seem to me that the repressed sexuality that Travers mentions, and the reason why Chabrol’s ménage-à-trois, compared with Truffaut’s is just no fun is that Albin is a deeply closeted homosexual. If he thinks he’s fallen in love with Hélène— as he attempts to explain to her when Andréas leaves for a few days to lecture—it is not because of any sudden heterosexual arousal, but that he has fallen in love with Andréas and everything associated with him, his wife, clothes, furniture, house, car, and even the seemingly so satisfied German to whom he might imagine being his “double.”

Albin’s real first name is André and he too is a writer who beyond his journalistic chores has published short fiction. You might argue that in his immature mind the renowned German writer is the other more gifted and successful self which Albin believes is his birthright. When, as Travers perceives, Albin smashes the mirror it is his friend’s cracked face which greets him as he picks it up see what is left of reality. Even as a revenge murderer, Andréas remains in control of the image everyone sees. While Albin makes several attempts to take on the guilt for Hélène’s death, no one to whom he expresses the truth will now believe him, wondering why a “Nice boy like me would want to become involved with such unspeakable acts.” 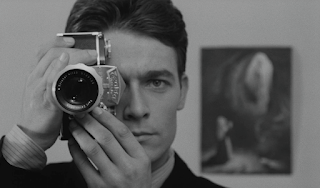 Even the fact that at film’s end he still remains a “boy” instead of a man also points to his queer feelings. As Hélène marvels about him, his face seems unable to reveal his true age; is he 20 or 40? Still an older boy or (in those days) a middle-aged man? Like Dorian Gray his face shows none of the lines of his endless series of lies, evil machinations, and daily frustrations. Albin cannot forgive Andréas’ scolding him for not telling them the truth about his inability to swim. In part, it simply represents another simple failure of a slightly effeminate man, a stupid and boyish lie he has kept to himself out of his embarrassment for not having yet attained that universally macho skill. But for Andréas, who has deeply suffered World War II, not admitting that don’t have a certain skill is akin to entire nations pretending that have the vision and knowledge to rule others. Such little lies are the source of wars. 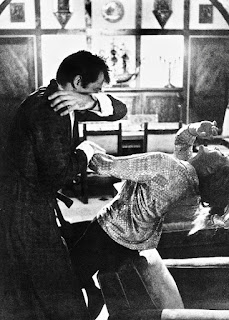 When Albin reveals what he knows of Hélène’s secret love affairs, she dismisses his threatened revelations, again suggesting that he is a boy not to be taken seriously; his response verifies his own sexual insecurities: “I could rape you right here if I wanted to.” But obviously he doesn’t want.

Strangely, it is the truth, sought out for terribly warped reasons, however, that results in the Hartmann’s domestic war, and ends both their lives, even if the one will breathe his last days in prison. And equally odd, if Albin/André can be described as a gay man, despite cinema's tendency to kill homosexuals off he remains living at the end of this film, even if perhaps he was never truly alive in the first place.

Posted by greenintegerblog at 3:45 PM