Franz Höllering and Friedrich Dammann (screenplay, based on the play by Christa Winsloe), Géza von Radványi (director) Mädchen in Uniform / 1958

A remake of the 1931 Leontine Sagan film Mädchen in Uniform, Géza von Radványi’s 1958 version even more emphatically restates the original’s themes, by extending its scenes to long out-of-door drills and marches, and by its rich color images which reinforce the eroticism of the original, and extend them by having the central figures, Manuela von Meinhardis played by the lovely young actress Romy Schneider and her beloved teacher Fräulein Elisabeth von Bernburg acted by the beautiful Lilli Palmer.

As in the original the Prussian women’s convent is run by the unfalteringly cold and bitter Headmistress (Therese Giehse) with her obedient assistant Fräulein von Racket (Blandine Eginger) where young girls are raised strictly to suffer the difficulties of marriage to Prussian soldiers. Undergoing severe punishment, sometimes beatings, for the slightest infractions—particularly for imitating their teachers and writing letters home in complaint—and generally kept underfed, all for the purpose of making them suffer deprivations which they may face if the country again goes to war, these girls have been made to suffer for an earlier generation’s suffering. 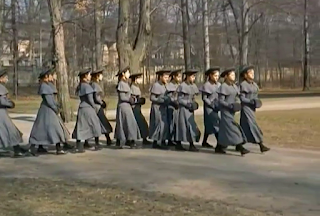 Many of the young girls have parents who, agreeing with these restrictions, have basically given them over to the next stage of their upbringing which, beginning in childhood, moves through the classroom into marriage. Accordingly, what these girls most desperately seek is love, any love they might encounter.

Manuela in particular, her loving mother having just died, is terrified by her surroundings, sent there by her equally strict and unloving aunt.

She and the other girls find that love in the outwardly orderly ministrations but secretly loving attention of their German teacher, von Bernburg. To be able to fit into the society of cruel and frightened women she has entered, the teacher pretends great strictness, threatening to fail some of her students who cannot immediately name the birth and death dates of figures such as Goethe and Schiller or list their closest friends, but actually using these standard questions to provide the girls with further opportunities of improving their grades. While she grabs their secret epistles from their hands, she tears them up instead of reading them and mocking or punishing their authors.

Von Bernburg’s particular expression of motherly love comes in the form her nightly kissing of each the pupils assigned to her care, gentling putting their lips to their foreheads one by one as she names them. For all of the girls it is a meaningful act in an environment which provides them with little in the way of other affection. But for the young neophyte it is particularly important as she quickly comes to almost deify the lover/mother, interpreting the many little kindnesses that her teacher demonstrates as representing a special relationship between the two of them.

In particular, when her own underblouse is nearly in tatters and she has difficulty in resewing it, von Bernburg selects one of her own blouses to wear, a gift that even the innocent girl knows enough to hide from her needy and envious peers. 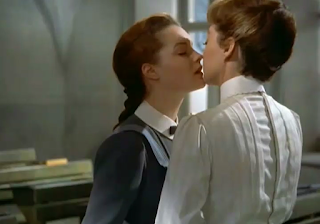 Yet the kiss is given even more significance when the girl is chosen to play Romeo in a special production of the Shakespeare play to be performed in honor of the Headmistress. Taught to simply  “declaim” by the ineffectual drama teacher, Manuela is asked to present a more energized, personal rendition of the male lover to her lovely teacher. Suddenly the shy student comes alive in the young lover’s ardent statements of love, and at the appropriate moment inappropriately kisses von Bernburg on the lips. When the stunned teacher, also perceiving what has elicited the unexpected sign of affection, does not fully scold her for her effrontery, the girl is now certain of her teacher’s “special” love. In the hothouse world of female sexuality, moreover, it does not take long for even the other’s to sense something of a far dramatic reality, particularly when after successfully performing Romeo and Juliet Manuela gets accidentally drunk on the party punch, spiked by a kitchen servant with rum, and shouts out her mutual love for her teacher in front of everyone.

A jealous schoolmate has run to notify von Racket the moment she has sensed her friend’s drunkenness and the Headmistress arrives to the schoolgirl’s after-the-play party just in time to hear the “scandalous” admission of a love that has never previously been spoken of openly in the iron-gated institution. Sent to the infirmary and refused communication with any other girl, Manuela is now most terrified for how her admission of love will effect von Bernburg.

Indeed, the teacher is strongly chastised by the Headmistress and her colleagues for encouraging such an infatuation, but the sudden visit of the Princess (Adelheid Seeck) delays any further punishment, and even Meinhardis is commanded to return to the schoolgirl’s fold to properly curtsy to their royal visitor.

The Headmistress might certainly have dismissed the girl from the school had not the Princess herself mentioned the young Manuela, having well known her mother. Attempting to rectify things with von Bernburg, Manuela suddenly appears in her teacher’s office, again expressing her deep love but also apologizing, particularly when she hears of her teacher’s decision to leave, fearful of continuing at the institution where she may simply perpetuate the situation.

When it is discovered that von Bernburg has had further communication with the child, she is called into the Headmistress and told she must leave, the teacher finally confronting the elderly gorgon for her cold and unloving treatment of the young girls under her care.

Hearing of the new wrinkle in the situation, Manuela runs to highest staircase in the building from which she intends to leap in response to the dismissal of loss of the only person whom she trusts and loves. 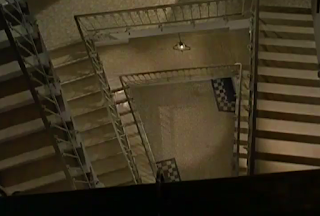 As in Sagan’s earlier version, the girls go on the chase to find their classmate, discovering her about to jump, von Bernburg begging her to stop. Some of the girls grab her from above and bring her back into safety and she collapses.

As in Sagan’s earlier version, the girls go on the chase to find their classmate, discovering her about to jump, von Bernburg begging her to stop. Some of the girls grab her from above and bring her back into safety and she collapses.n a feverish coma, the Headmistress visits the girl, unpredictably holding the hand the girl holds out like a lifeline, somewhat unconvincingly begging the dismissed teacher to stay on and help her better educate her students. In the last scene of the film, the elderly woman walks slowly down a long hall away from the camera with her cane in tow, representing the end of her long reign and suggesting the possibility of new understanding and kindness for such future pupils. 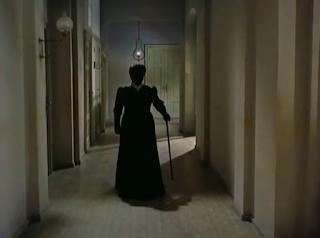 Much like Jacqueline Audry’s Olivia (1951), neither Sagan’s 1931 version nor Géza von  Radványi’s should be read as openly lesbian films, I believe, but simply as evidence of the desires and ardor of young women put into such situations, particularly when they desperately need love. If their behavior demonstrates how lesbian love might begin or suggests their proclivities to such relationships, it is nonetheless important to perceive that these young girls have not yet precisely established their sexual identities. Yet we all know that “first loves” can be influential on anyone’s life, and certainly Manuela has experienced just that through her caring and loving teacher.

So powerful was Chrissta Winsloe’s original play, that it was also adapted into a Mexican film, Muchachas de uniforme by director Alfredo Crevenna in 1951. Although this evidently faithful film has been shown in many LGBTQ cinema festivals, I could not successfully find a way to obtain a copy in English.

Posted by greenintegerblog at 12:26 PM