Hamilton MacFadden | Oh, for a Man!

the pleasure of pain

Philip Klein and Lyn Starling (screenplay, based on a story by Mary F. Watkins), Hamilton MacFadden (director) Oh, for a Man! / 1930

Oh the life of a successful opera singer! Although Carlotta Manson (Jeanette MacDonald) may seem to have it all, major roles such as Isolde in Richard Wagner’s Tristan und Isolde (in truth MacDonald’s singing is quite embarrassing), an adoring audience, a loyal personal maid, Laura (Alison Skipworth), and a large squadron of friends, she begins Hamilton MacFadden’s 1930 film, Oh, for a Man! as a furious Prima donna, frustrated with a sudden glare of an electrician who has mistakenly focused a vast spotlight on her midway her final aria, disgusted by her co-star forced to wait out her long final scene as he lies dead on stage, irritated by a wealthy dowager who camps out with her ugly, obviously untalented daughter in her dressing room insisting that her daughter is often mistaken for the star and sings almost as well as she, and simply worn out by the endless parties filled with boorish men and women who demand she hear them sing, listen to their newest composition, or simply bear out their endless twaddle evaluating her most recent performance.

While Carlotta seemingly smiles beneficently upon the world inside she is a volcano ready to erupt, with only the head of the opera house (Bella Lugosi) and Laura to remind her of her necessary pretense. Is it any wonder that, as she frustratedly attempts to fall asleep and suddenly encountering the flashlight of a burglar striking her face, that she announces, almost with relief,  “Don’t take those, they’re not worth anything.” Getting a better look at her assailant, who is about to chloroform her into unconsciousness, she thanks him for abandoning his intentions (she intoning something to the effect, “You don’t know how many performances I would have had to cancel due to what the chloroform might have done to my vocal chords”) and becomes even more attentive when, after she mentions her name, he insists that he too adores her singing and is a regular opera-goer. 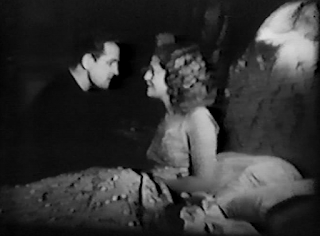 Within seconds she demands he remove his mask (“If your eyes are any indication of your other features you must be a regular Apollo”), asks him to remove his cap, and imagines him in tights. She is impressed, unlike all the other men—read pansies—who surround her, finally in the man who calls himself Barney McGann (Reginald Denny, with what has to be the worst Irish or is it Scottish accent ever committed to a movie soundtrack). But once she gets a look at him, recognizing that he might have even beaten her a little, as he threatens to—being evidently the same sort of woman as in Rowland Brown’s Blood Money, a female who enjoys a little physical pain from the man she loves—she has gone into another realm of logic. Even the fact that he too thinks he has a good enough voice that she ought to hear him perform a recital doesn’t faze her. Like Charles Foster Kane of Orson Welles’ Citizen Kane, she is convinced that her male version of Susan Alexander will become a fine opera singer with just a few hundred lessons provided by her own mentor. Yes, obviously this girl is into pain.

At one point early in the film we watch several of her opera “family” gathered round her curtained-off bed, from whence we hear deep menacing groans. When Carolotta finally appears she looks worn and slightly stunned as a masseuse (Bodil Rosing), a lookalike for a Bulgarian weight-lifting bull dyke soon also appears from behind the curtain, suggesting that it is just such a being that most gives the petite Carlotta true pleasure. 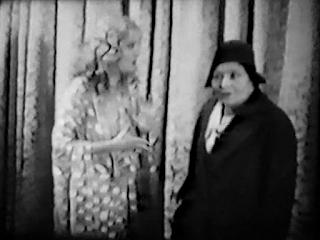 Tired of singing endless scales, Barney dismisses his abusive singing coach and tells Carlotta that he’s giving up his voice lessons, realizing that he’ll never become anything but a belting boatman-like crooner; besides, as he puts it, “Half the time I feel like a regular pansy.”

Sympathetic with his he-man whines, she kisses him, he asking, a bit like Bogart, “Well kid, where do we go from here?”

You just know that that question is the perfect set up for her statement of desire, “straight to the wedding chapel, dear,” and indeed she does state her desire to marry rather bluntly. Before moving very far forward in the conversation, she is ready to completely give up her singing career, before he makes his final cruel demands that she also give up her “family,” her opera friends, advisors, agents, and even her beloved personal housekeeper, Laura.

Clearly it’s a weak man that has to demand all that, and although Laura leaves even before she can be fired, she is quickly back on board as the couple set sail to Europe on their honeymoon, which they spend mostly in a quiet and remote Italian village. 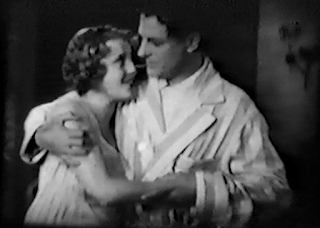 Just a few days into their honeymoon idyll, however, they are fighting over her morning ritual of singing scales and his of loudly pounding the punching bag. He doesn’t like Laura’s breakfast of a lightly boiled egg. And before he can even begin to make his other complaints, some of Carlotta’s friends have amazingly found their way to their hidden paradise and invited their friend out to a charity party that very afternoon for which, of course, they insist that she sing.

Barney miserably walks the villa grounds as she sings a song more appropriate to Jeanette McDonald’s talents. But while doing so, the misplaced macho discovers his old American friends, Totsy Franklin (Marjorie White) and the Italian-American who she’s wed, ‘Pug’ Morini (Warren Hymer). So excited to meet his own kind, Barney grabs his old buddy Morini and gushes, “Oh boy, oh boy, I could almost kiss you,” before skipping the formal party luncheon for their company and leaving poor Carlotta for what looks to be forever.

She cries a few tears over the loss with Laura, briefly contemplates becoming a nun, and finally even killing herself, but fortunately heeds Laura’s stolid advice, “Never kill yourself when you’re miserable. It’s bad luck.”

Fortunately, she quickly perceives that she needs to stop dreaming and wake up, which might have been a wonderful frame for her silly adventures into her fantasy relationship if it hadn’t been that her dream has been confirmed by all the other characters in the film. But within minutes she realizes that she needs people who appreciate her, and returns to the opera stage. 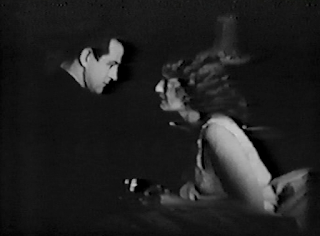 Upon finishing her several curtain bows, she returns to her dressing room to find a huge floral heart waiting for her at the very moment she is bemoaning Barney’s absence. Immediately she demands that the opera assistant go on the search of the stealthy burglar, who’s obviously seen her perform despite the fact that everyone swears he could not have been there. By that evening, giving up their reuniting and falling into bed, she discovers the thief once more standing over her, flashing the flashlight into her tearful eyes. He’s come to tell her that he still loves her, and she begs him to stay on just a little while longer, maybe for her whole life. He seems to accept her proposal, sitting her side...but we can’t imagine from what we’ve witnessed so far that such a relationship might possibly last, and certainly by this time we’re not that interested in hanging around to discover whether or not they try it all over again. Although a diva may be willing to die a hundred deaths, we’ve got to get home to pet the cat.

Posted by greenintegerblog at 1:02 AM