As I mention elsewhere in these pages, when I undertook to write on every LGBTQ film I could get my hands on, I realized that not everything I saw would be to my taste, interest, or even what I see from my rather broadly open viewpoint as moral. There’s nothing morally reprehensible in Ryan A. White and Alex Clausen’s strange voyage down a memory lane of Palm Drive, a road of which I previously had no knowledge—unless of course some of the leather fetishes that this film features actually did more physical damage than those whom they filmed and the early Sonoma County filmmakers Jack Fritscher and Mark Hemry claim. 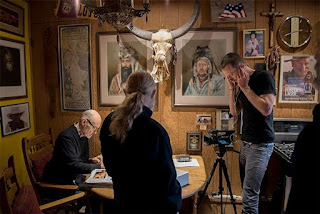 Most of the activities which Fritscher describes as including any fantasy you might have imagined seems to involve a high sense of theatrics, which is ultimately why, I’d argue, it doesn’t truly interest me, since when it comes to sex I’m a full-out realist desperate to put my body upon or into another males’ flesh. But to suggest that their “art” offered viewers new possibilities into a world of safe-sex porn during a time when LGBTQ sex in general was problematic and deemed by many as deadly is surely stretching it—as well as extending, pushing, pulling, pummeling, pricking, and punishing it—more than a little, since most of the sounding, mud-bathing, imprisoning, pissing, shitting, and anything else you can imagine solo sex activities seem, at least by the looks of it, as anything but “safe” and more than often having nothing to do with what generally might be described as “gay” sex, at least in the sense of involving sexual activity with one’s own gender or identification with a gender into which one was not born. At least one of the regular performers, Donnie Thrasher, admits to being a straight male.

While one might argue that the sexual acts portrayed by Fritscher and Hemry’s Palm Drive Video and Fritscher’s famed Drum magazine represents an equal opportunity world of sexual fetishes for one of any sexual proclivity, whether it falls under the white flag of heterosexuality or the rainbow coalition, we have long recognized much of the leather fetish scene as an offshoot of gay male activity. 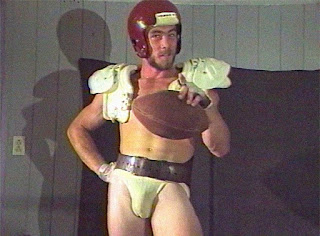 What is quite curious about the Palm Drive Video offerings shown in this documentary as part of a large catalogue of films that provided nearly every fantasy imaginable that did not put the actors’ lives in danger or was illegal—although clearly authorities and other forces protesting the productions of this studio claimed they were both of those things—is the complete lack of racial diversity. The figures presented in these films were primarily white, overweight, older-aged bears. What might other cultures and racial identities proffered as leather fetish fantasies? We’ll never know from watching RAW! CUT! VIDEO.

I truly embrace the idea (if not the many the rather unattractive practitioners portrayed in this film) that we should catalogue and archive the wide range of sexual activities even if that includes dragging equally heterosexual fantasies into the LGBTQ corner of experience. I’m in complete agreement with Alfred Kinsey’s assessment that you can’t judge or evaluate a sexual action numerous members of our society are practicing if you don’t even know about it. 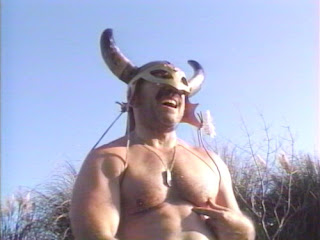 And I should imagine that even I might have sexual fantasies that would startle or even disgust many individuals even if I don’t actually engage in them. A number of more normative LGBTQ and heterosexual films, in fact, do play out non-leather versions of just such fantasies from the rather banal male fantasy of watching one’s wife engage in lesbian sex (the subject of Lane Janger’s Just One Time of 1999) to the various versions of heterosexual dramatizations of female-male rape and mutual murder (played out in the movie I just finished writing on, Nicholas Roeg’s The Man Who Fell to Earth, 1976), and Atom Egoyan’s ready to sexually please any gender insurance adjuster in The Adjuster (1991). 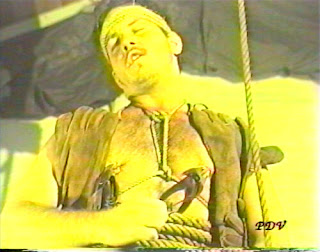 The dynamic interchanges between media, disease, and  human sexual behavior is central to answering all of these questions and more, and White and Clausen’s film RAW! CUT! VIDEO! is an important chapter of that broader picture.