Just before Oliver Hardy and Stan Laurel got married to each other’s sister in 1933, in the silent short of 1928 they were both married to wives who each week demanded that they hand over their entire pay checks.

Both had attempted to keep back a couple of dollars for their own expenses, but Ollie’s wife (Lyle Tayo) quickly discovers his hidden cache. It appears at film’s beginning that Stan Pincher (San Laurel’s name in this short) has been luckier, having stashed away a number of bills in a wallet he hides within a secret panel in a painting on the wall. While he attempts to put his new dollar bill with others, however, he wife (Fay Holderness) observes his activities and sneaks back into the room later to replace his cash with paper tokens she’s been saving up to buy a pitcher.

Sharing his good fortune with his friend Ollie, Stan and he decide to spend an evening on the town instead of hanging out their wives who have gathered to gossip, the neighborhood gossip (Patsy O’Brien) stopping by to join on the gab fest.

Pretending to go bowling, the two run off to a nightclub with great steaks and performances by a group of little people, The Doll Family midgets.

As they are about to enter, two men are thrown out of the place for their inability to pay, and their dates (Kay Deslys and Anita Garvin) are being held by the restaurant manager demanding payment, along with the Taxicab Driver (Leo Willis) who has been running the taxi the entire time their dates have been inside.

Knowing that Stan is flushed with money, Ollie cavalierly offers to pay for the meal and for the taxi if the two women join him and his friend, a deal which the womenfolk cinch by flirting with the two unsophisticated husbands.

Ollie orders up large steaks, potatoes, beer, and sits ready to totally enjoy himself, when the cab driver returns to remind of the ongoing bill even inviting him to join them in a meal.

Meanwhile, “Miss Mischief,” the town gossip, has been walking by the restaurant at the very moment when Ollie and Stan enter it with girls on their arms, and she rushes off to report the news to their wives whom she has just left.

As the tab increases, Stan checks his wallet just to be sure that his small financial windfall is still in place, discovering that they bills have been replaced by the tokens. He has a great deal of difficulty in trying to signal Ollie about their new situation, and when he finally does, the two determine to sneak out as the lights are lowered for the Doll Family’s performance.

At that very moment, however, the waiter comes by with a full try, tripping on Stan’s crouching body, spilling its contents to the floor and forcing Stan to suddenly have to return to his chair as if nothing has happened.

When the act is over, the two despair, wondering what could be worse—at the very same moment they spot their wives at the entrance, evidently set on having their own dinner at the place while forcing their husbands to suffer their impending shame in their presence.

Another act is beginning, and again, as the lights dim, they attempt to make their escape. Once more at that very moment the waiter passes by, tripping over Stan’s semi-prone body, spilling everything to the floor and arousing the wrath of a nearby diner. And yet again Stan returns to his chair to pretend he is innocent of any involvement. 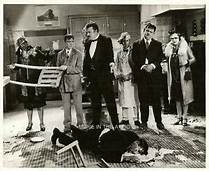 Soon, however, the two bolt, running out and in through another door, racing past their wives who soon join the manager, waiter, and various others on their tail. Reaching the kitchen, their trapped, reacting the way any comedic actor worthy of his cinematic name does, throwing a pie into the waiter’s face, an egg at the cook, and other foodstuffs at those also chasing after them.

Finally their wives come to retrieve them, but we know for certain that they will remain in familial prison for months, even though Ollie tries to pretend that he was led astray by Stan, and he had no idea where they had been going or why the girls suddenly showed up to their table. Stan Laurel, as he does so often, remains speechless at the injustice of it all.

Posted by greenintegerblog at 2:34 PM