As if to reiterate their intensely close male relationship, in their 1933 film Twice Two writer Stan Laurel (uncredited) has married off the loving pair to each other’s sister, the four sharing a house. Indeed this 20-minute short begins with their very first anniversary, which they decide to celebrate, calling their wives, Fanny Laurel and Sandy Hardy (played by the boys in drag), to invite them out to a Chinese restaurant for the evening.

Alas the two women have other plans; they’re cooking an anniversary dinner and planning a special after-dinner surprise, primarily it appears for Oliver Hardy, since Sandy tells her brother not to tell Ollie, which of course he immediately proceeds to do. 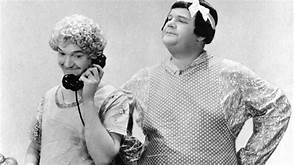 Even before the fellows return home, we realize that not is all quite right in the Laurel-Hardy household, as the two women fight—for some of the very same reasons that Ollie is always distressed with Stan, but not quite as calmly as their husbands, who mostly when having difficulties, steer out of each other’s way. For them the “fine mess” they get one another into is almost expected, but for their wives it’s a true disaster.

Bringing out the beautiful cake from the kitchen, Sandy is suddenly called upon by Fanny to help her pull out the extra leaf in the dining room table. Not knowing where to place the cake, she of course puts it precisely at the center at the table so that when Fanny leans under to pull out the leaf the cake with candles intact falls upon her head, making her look very much like the portrait upon the wall of Elizabeth I.

Stan and Oliver have their frustrations simply getting in front door, but Stan finally takes the back door route through the kitchen causing further problems, but at least alleviating a face to face confrontation with his scolding friend.

But Mrs. Laurel is not quite so very patient with her often disoriented and perplexed husband, and the equally light-minded Mrs. Hardy—who with curly blonde hair spends a great a deal of time in giggles—doesn’t like the way Sandy treats her brother and often voices her disapproval.

Fanny, having ordered a new cake, sends Stan out with 15 cents to get some strawberry ice cream while the others sit down to the meal. He is quickly told by the counterman that they don’t have any strawberry ice cream, forcing the distressed Stan to make a 5-cent call to tell Fanny, who suggests he buy tutti-frutti. They’re evidently out of that as well, so poor Stan is required to make another 5-cent call. This time Fanny suggests chocolate. But they don’t have than either. Nor vanilla or any ice cream whatsoever. He has to try the place next door, so the soda jerk (Baldwin Cook) finally tells him, but he now has no money so he returns home empty handed.

In the meantime the meal has gotten more and more disruptive as the two women go at one another, Fanny suggesting that since she wears the pants in the family she’ll treat Stan precisely as she wants, Sandy attempting yet again to defend her brother. As the two begin to throw table items and food at one another, the husbands attempt to restrain them. Finally, Fanny forces Sandy and Ollie out of the house, claiming that she rules and owns it, the pair deciding they might have a more enjoyable meal by themselves. 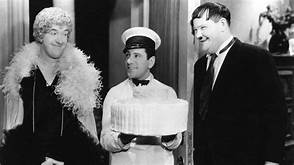 But just as they are about to leave, the delivery boy arrives with the cake, asking Sandy to make certain that it gets delivered to Mrs. Laurel. Sandy is only too glad to deliver the cake up directly into her sister-in-law’s furious face.

So, it appears, being married to each other’s siblings is no better than the other penny-pushing angry wives to whom the two have been married throughout the series of films. The boys simply get on together more easily than the girls. But it’s fun to see them both together with their drag versions of their wives behaving quite differently simply due to gender. Perhaps we should perceive as an inner view of their husbands less outwardly expressive emotions. Men, after all, aren’t supposed to express the feelings that are totally permissible for the female sex.

This was the last film that James Parrott directed of the two performers.