Kōichi Imaizumi (screenwriter and director) ‘憚り天使 (Angel in the Toilet) / 1999

A bit like the messenger—not even the angel—of Pier Paolo Pasolini announcing the arrival of miracle-worker in Teorema (1968), Kōichi Imaizumi’s “Angel” suddenly shows up, with his bedraggled wings, in the crude public outhouse in that director’s 32-minute short Angel in the Toilet, a truly innocent young ready for action of any kind. And immediately he does provide a good fuck for one of the toilet’s visitors, while others—presumably disinterested heterosexuals—do not even take notice of his existence. 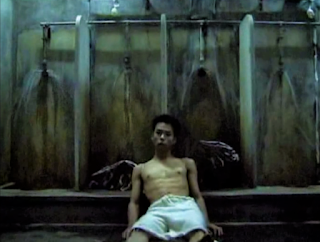 Yet, as we quickly discover and as anyone who has spent long hours in a toilet waiting for the right person to come along knows, there is a great deal of downtime in “cottaging.” In that filthy environment, the angel quickly makes friends with the symbolic animals of the dark commode abode, a snail and a purple snake, both performed by obvious childlike toys in Imaizumi’s film.

The young beauty spends so much time in-between quick sex fixes—a man who seems to prefer simple frottage on the urinal floor, another S&M figure who chains and brutally fucks the angel, and yet another who simply enjoys mutual masturbation—that the angel himself, moving in and out of half-nakedness and the casually dressed appearance of those with who he meets, begins to mop and clean the space. Mostly, however, he is simply impossibly bored. 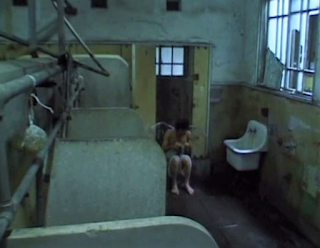 Obviously, those who encounter him are experiencing sex with a true wonder, a kind of spiritual virgin who hasn’t yet even imagined that there are better and cleaner toilets to inhabit or that there are different ways of showing and making love—that is until one day a kiss of a stranger reveals to him that same sex beings are also capable of making love outside in the sun, of sharing a bed together, of creating a kind of relationship, or, if nothing else, of entering a cleaner restroom and joining together for intimate stall sex. 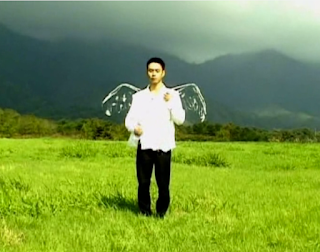 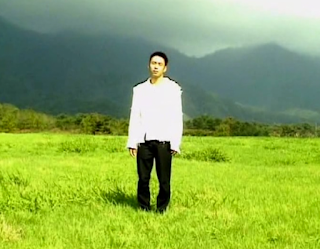 Gradually our blessed young angel seems to lose his branch-like wings—after all, he has joined forces with the serpent and taken up an occupation that may not be in the best interests of his given birthright. He moves out of the dreary cottage in which he first discovered himself, and, as we observe in the quick scene which introduces this film, he simply pretends to wash up as he encounters a young man and joins him in a clean stall for sex in a completely modern men’s room. 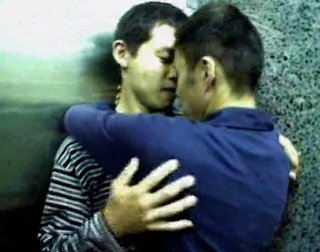 Surely, he is no longer the marvelous angelic wonder that we first see him to be, but he is most certainly no longer simply there for other men’s use. The angel in the toilet has become the modern day queer waiting for a bathroom pickup.

So does the Japanese director Imaizumi—who himself performed in several Japanese pink films, gay and straight, before breaking away to direct, this being his first effort, his own queer cinema—satirize what we all might all have at one time encountered, that special moment of meeting a young innocent quite by chance in an act in which we sought only to release the urine from our penis. Where, we well might ask, has that angel in the toilet gone? Perhaps he now is even one of us?

Posted by greenintegerblog at 1:05 AM