Nicolas Roeg | The Man Who Fell to Earth

fall of a god

No one has ever claimed that Nicolas Roeg’s fascinating 1976 film The Man Who Fell to Earth makes logical sense. All right, Thomas Jerome Newton (David Bowie) is an alien from another planet who drops to earth to check out the possibility of shipping water to his own drought-stricken planet. That he happens to end up in the relatively dry state of New Mexico and. once there. proceeds to hawk an extraterrestrial ring for just $20, when, we soon after discover, he is already loaded with a fistful of American 1000-dollar bills is unexplained. Maybe he just needed a little spending money for daily living, intending to apply the wad on hiring a patent lawyer, Oliver V. Farnsworth (Buck Henry). 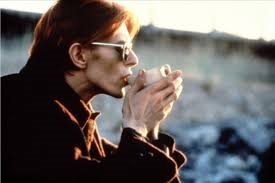 That Farnsworth can quite easily read the complex mathematical renderings which represent the vague inventions that our world has never-before known, I suppose, is something that we can overlook, just as we can ignore the fact that the film makes utterly no attempt to explain what these patents represent except to put him suddenly in the league of Eastman Kodak, Edison Radio, etc.; and how Farnsworth manages to sell them for millions of dollars so very quickly only reestablishes the fact that this newly-arrived “Englishman” has somehow chosen precisely the right person to head up his new multi-billionaire dollar industries.

But why does Roeg spend so much energy early-on in his discombobulated film with the sex life of Dr. Nathan Bryce (Rip Torn), a university professor who specializes in sex with his young co-eds is never truly established except perhaps to reveal how perfectly empty human relationships are in relation to this extraterrestrial’s longing for and gentle memories of his wife and family unit back home, which strangely seems modeled on the Norman Rockwell vision of heterosexual normality as opposed to the fetish world created by Bryce and his college-going girlfriend.  And why Newton should want to hire him, over all others, as his fuel-technician, planning as he does to build rockets to carry the water back and forth between earth and Newton’s unspecified planet is totally inexplicable.

What attracts Newton back to New Mexico after visiting Farnsworth in his Manhattan apartment to establish his colony? Okay, it must have been easier to film there. And the landscape is certainly more beautiful, closer to the way, evidently, that of Newton’s world before this early fable of climate change transformed his planet into a dry wasteland. Foreign directors have long been driven to express the vast, empty spaces of the American landscape and its equally empty culture through desert locales.

It is there, during a temporary hotel stay, that Newton meets the all-American girl, stone-dumb church-going, TV-watching, alcoholic Mary-Lou (Candy Clark), a woman so lonely and abused that she is delighted that someone might bother to listen to her—which  Newton does with a dazed (according to Bowie, cocaine-induced) stare into space; we perceive it as part of Newton’s inability to adjust to his new planetary locale, particularly given that the moment this hotel maid first encounters Newton who passes out in an elevator on its speed up to the fifth floor so that she must literally pick up and carry him into his hotel bed. Evidently the man who has recently fallen at incredible speed from his rocket, can’t deal with fast earth-bound movements; even an elevator ride sends him reeling.

In any event, once Mary-Lou gets her hands on him, she is unwilling to let go until he too is hooked on TV and alcohol. But being an alien, evidently, he can watch not only one TV channel but simultaneously digest a whole bank of them, as if living in a world created by the video artist Nam June Paik.

Is it any wonder that their relationship begins to dull, and he turns to his new fuel technician for friendship? Although seemingly happy with his new job, Bryce, again without explanation, begins to suspect his employer and sets up an X- ray camera to capture the real alien look of Newton. It’s not a pretty sight, as we perceive, when Newton reveals himself to Mary-Lou who goes screaming out of their bed, and cowering on the floor of the kitchen, sick to her stomach in anticipation to the response the character Fergus will have in Neil Jordan’s The Crying Game (1992), vomited and fled the place when his gal revealed he had a penis. Even if she still has a yearning for the monster, there’s no truly going back to “it” / him.

No matter, Bowie/Newton quickly gets beautiful again, and continues to work toward his goal of creating a rocket to bring the earth-water home. Betrayed by Bryce, again for reasons that are not entirely clear, Newton is stymied—arrested and locked away into a series of secret, incomprehensibly kitschy-decorated rooms, where, kept under alcohol sedation, he is prodded and poked by all sorts of scientists who try to determine who or what he truly is, also accidently, and for no reason whatsoever, sealing his human eyes onto his own alien slits. Farnsworth and his gay lover is defenestrated out a penthouse window, apparently by the conglomerate of the US government and a rival company aided by Mr. Peters (Bernie Casey) who lives with his wife and his several children in a lavish Malibu-like lifestyle.

Strangely, all this seems not to matter much. If anything Bowie/Newton, still staring off into space, gets younger, while Mary-Lou (who name evokes the 1961 Ricky Nelson version of the song), evidently missing the old days, and looking like hell a few years after living in an alcohol-infused relationship with Bryce, drops by for a visit. After a long drawn-out sexual fetish dance of shooting one another dead, in which we get to spot Bowie’s penis, she tells Newton she no longer loves him, and he, rather vaguely suggests he doesn’t love her either—hinting that perhaps he never did.

Soon after, he discovers that the door to his hotel prison has been left unlocked. Was it ever really a locked? Perhaps the open sesame was simply giving up his former girl. Does it matter?  He escapes, but no longer has any place to go, the people of his own planet probably having long ago died.

In short, it’s hard not to agree with film critic Roger Ebert who described The Man Who Fell to Earth as being "so preposterous and posturing, so filled with gaps of logic and continuity, that if it weren't so solemn there'd be the temptation to laugh aloud." Reportedly when Paramount’s Barry Diller first saw the finished work, he refused to pay for it, claiming it was nothing like the film he was promised.

Yet, Roeg and his cinematographer Anthony Richmond, have created in this film such a beautiful looking color work, and Bowie—even when staring meaninglessly off into space—is so mesmerizing that it’s hard to dislike this work. And at moments (even in little lines such as “I just need to sleep, Mary Lou”) Bowie deadpans his alien in a way that almost matches Peter Sellers’ brilliant portrayal of another kind of alien in Being There three years later. And, finally, this film has a lot of likeable music, organized by The Mamas and the Papas’ John Phillips.

Moreover, we recognize that this film is also so coded that perhaps its director couldn’t fathom what to make of it. Innovative queer scholar Vito Russo was impressed by Henry’s portrayal of Farnsworth as a gay man whose life was not centered simply around his sexual activities and approving of the way his relationship was portrayed like any other without comment; but oddly he doesn’t mention that even he and his unintrusive lover had to eventually be killed off simply because of his connection with the far more significant “queer” Newton.

Bowie’s character might be outwardly presented as basically normative heterosexual both before his trek to earth and after, yet as an alien he is inevitably a queer, an outsider, and—as nearly everyone around him, including Mary-Lou describe him—a “freak,” something even more frightening and ultimately detestable than a “puff” or “faggot.” “You know Tommy, you’re really a freak. I don’t say that unkindly. I like freaks.” 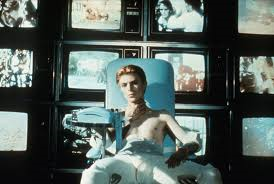 But of course, she doesn’t really like freaks, particularly when it comes to that facts she discovers about her Tommy Sussex, Newton’s domestic pseudonym, underneath his convincing human garb may be an anatomical difference for which even the current LGBTQ+ doesn’t yet have a designation. If seeing Bowie’s penis is truly insignificant, seeing Newton’s penis brings up numerous other questions, such as is it merely part of his anatomical costume for human interchange or does he have a completely different system of sexual organs. Even if it appears that his alien society lives in Earth-recognizable familial units, how do they come to be perceived in his unnamed planet? Surely it can’t be as predictably hetero-normative that it appears to the human eye.

The doctors who later probe his body in order to discover if he is or not a human being—they appear skeptical about his being what Mary-Lou, Bryce, and the movie’s audience know him to be, an alien—seem to be obsessed with his nipples and well as his eyes, but seem strangely uncurious about his cock, any semen it produces, or his neurological system that sexually attracts him to or disinterests him from different genders.

Just before he and Mary-Lou play out their sexual fantasy of “shoot-em up” he admits to her that he has been thinking recently about male bodies, he presumably meaning the dead bodies of the many doctors and company traitors around him, while she immediately interprets it as a sexual interest, querying why he’s been thinking of guys instead of girls. Whose interpretation is correct?

And later, sensing his deep unhappiness for being trapped for the rest of his days on her planet, Mary-Lou pleads with him to simply reveal himself to the doctors as he really is and perhaps they will let him return to his own planet. Even in any earth-stuck movie this would have to be interpreted as a plea to come of the closet, which Newton, for his own reasons, simply refuses to do.

Finally, there is the case of his seeming inability to age. If anything, as Mary-Lou puffs up to middle age and Bryce is transformed into a grizzly old man, Newton remains forever young, even releasing like his alter-ego Bowie a musical album title The Visitor which his alien wife might be able to hear over the radio waves. He is, accordingly, also a kind of Dorian Gary able to convince almost anyone of his innocence by his slim, youthful body and lovely androgynous face—the very gifts that Bowie employed throughout his career.

Even if the movie doesn’t say as much as it might have wanted to about what we human Americans might do to a more intelligent and beautiful species, it does suggest that this galaxy-trotting, lanky Christ (literally carried to possible salvation by his commonplace Mary) might never get back to heaven, hinting—perhaps unintentionally—at a sort of Wagnerian fall of the gods. And isn’t that, after all, also what Bowie really was, a kind of alien-like god, having just a few years earlier turned his golden mop of hair into a frizzled red cap to create the first of many personae, Ziggy Stardust, also an alien from outer space?

Of course, it doesn’t make sense; it’s show biz. Which makes it obviously worth watching.

Posted by greenintegerblog at 5:52 AM